Police in Miami responded to a shots fired call at Lil Wayne’s house in the city. The call came at around 1:30 p.m. on March 11 from a person claiming to have shot four people at the rapper’s house. Less than 2 hours after the call, police gave the all clear.

1. Police Think It Was a Case of ‘Swatting’

"Swatting" is a possibility but MBPD does not take chances when responding to these types of calls.

An hour after police received the report of a shooting, the Miami PD tweeted that “swatting” was a possibility but that no chances were being taken. TMZ reports that rapper is in Miami but wasn’t in his mansion when the call was made. His label, Young Money, tweeted, “Wayne is okay. Wasn’t home during alleged events.” The label’s president, Mack Maine, also tweeted saying, “Everybody good on our side…thanks for the concern.”

Local 10 in Miami reports that four people are shot at the house. WSVN reporter Rosh Lowe says that the call to police didn’t come from inside the mansion. SWAT teams quickly descended on the house. WSVN reports that cops have been “unable to contact anyone inside the home.” Later, the station, quoting a police source, said “At this point there are no indications of shots being fired.” After an initial search of the home’s perimeter, no victims were found. CBS Miami reporter Natalia Zea tweeted that the person who called cops said he shot four people at Wayne’s house.

2. Less Than 2 Weeks Ago, Police Had to Move Along a Suspicious Person Outside Wayne’s House

The shooting comes less than two weeks after police were called to his home due to a suspicious person lurking outside the mansion, reported TMZ. That person wasn’t arrested by police as he never entered private property. Although there was no arrest, “the commotion did alarm a few neighbors though,” reported the gossip site.

The home is located at 94 Lagorce Circle in Miami. It was on the market, according to a 2012 listing, Wayne bought the home for $14 million in 2011 but he was looking for $12.9 for the mansion. The quick sale was said to be wanted due to his $5.6 million tax lien.

The house is described as being “sprawling” and features “15,000 square feet of living space, plus a three-bedroom guesthouse, a three-car garage and a swimming.” According to the South Florida Business Journal, Wayne later decided to extend the mortgage on the home. The house is valued at $9.4 million.

4. Wayne Is Due to Play at a South Florida College Tonight

The rapper is due to play at Nova Southeastern University’s homecoming Shark Bash party on March 11, the day of the “shooting.” You can watch a video showing the announcement of Wayne’s performance above. The singer is rumored to be dating Christina Milian.

5. Wayne Has Had a Long Difficult History With Guns

When he was 12, Wayne accidentally shot himself with a 9mm handgun. An off duty cop named Robert Hoobler drove him to the hospital, reports NOLA.com. In 2009, Wayne was sentenced to a year in Rikers Island for gun possession, a charge that stemmed from 2007. 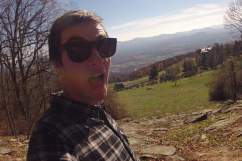