Rapper DMX speaks during the 2012 Rock the Bells Festival press conference and Fan Appreciation Party on at Santos Party House on June 13, 2012, in New York City.

Police are investigating a report that rapper DMX and his entourage robbed at gunpoint a 21-year-old man at a gas station early Sunday morning in Newark, New Jersey.

DMX, real name Earl Simmons, 44, was identified by the victim, who said he approached him after recognizing him at the gas station, police told NJ.com. Police said the investigation is in the “early stages” and no charges have been filed, according to the news site.

1. DMX Was in New Jersey for a Show

DMX was at the New Jersey Performing Arts Center in Newark for a show on the “Masters of Ceremony” tour with several other rappers, according to his Twitter account.

DMX smokes a cigarette during the 2012 Rock the Bells Festival press conference. (Getty)

The 21-year-old victim, who wasn’t named in news reports, told police he had $3,200 pulled from his pocket during the robbery, according to NJ.com’s report.

According to News 12, a local news station, DMX was taking photos with fans when one of them was robbed by a member of his entourage.

After he “snatched the money out of (the victim’s) hand,” DMX jumped into one of four Cadillac Escaldes that then left the scene, police said.

3. He Followed the SUV & Gave a Description to Police

The victim told police he followed the SUV out of the gas station and onto a highway, according to NJ.com. He was able to give police the license plate.

Police did not say if they were able to link the license plate to DMX.

4. DMX Has Had Several Run-ins With the Law

In this handout photo provided by the Greer Police Department, Rapper DMX, whose real name is Earl Simmons, is seen in a police booking photo after his arrest in 2013. (Getty)

He was arrested four times in 2013 in South Carolina, according to GoUpstate.com on charges including possession of marijuana, driving without a valid license and driving under the influence.

DMX, born in Yonkers, New York, began his career in the late 1980s as a beatboxer and then spent the early 1990s as an unsigned rapper. He released his first album in 1998, Get Me Dog, on Def Jam Records. His bestselling album, …And Then There Was X, was released in 1999. He’s working on his eighth studio album. 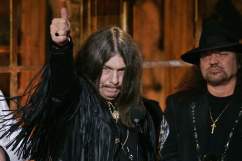 Loading more stories
wpDiscuz
0
0
Would love your thoughts, please comment.x
()
x
| Reply
DMX is being investigated by police after a Newark, New Jersey man said he was robbed by the rapper and his entourage at a gas station Sunday morning.