A member of the Bandidos Motorcycle Club. (Getty)

Members of the Bandidos Motorcycle Club were among 5 gangs involved in a shootout in Waco, Texas that left 9 dead and 18 injured.

Two other gangs, the Cossacks and the Scimitars, who appear to be aligned, were also involved in the shooting. The other two gangs haven’t been identified.

Police said Monday morning that 170 people were arrested in connection with the shooting and will all face engaging in organized crime charges. The investigation is continuing.

The rivalry between the Cossacks and the Bandidos in Texas goes back to at least 2013.

According to the BigCountryHomePage.com, the president of the Abilene, Texas chapter of the Bandidos, Curtis Jack Lewis, was arrested in November 2013 on charges that he stabbed two members of the Cossacks during a fight outside a restaurant.

Here’s what you need to know about the Bandidos:

1. The Bandidos Were Formed in Texas in 1966 & Spread Worldwide

The motorcycle club was founded in 1966 by Vietnam War veteran Donald Chambers in San Leon, Texas, according to one of its websites.

Chambers was convicted of murder six years after founding the gang.

The gang’s motto is “we are the people our parents warned us about.” It’s patch is a man in sombrero with a machete and pistol.

It has spread to more than 100 chapters in the United States, and international chapters in Germany, Australia, Denmark, France, Italy, Sweden, Norway, Malaysia, Indoensia, Singapore, Costa Rica and Belgium.

There are more than 1,000 members in the United States.

The gang’s main rival has historically been the Hell’s Angels.

A gang expert told the Washington Post that the gang shootout parallels previous fights between the Bandidos and the Hells Angels, one of the world’s largest biker gangs.

The expert, Kansas City-area police officer Steve Cook, said the feud started because the Cossacks, backed by the Angels, challenged the Bandidos for control of Texas. Other gangs joined the battle with the Cossacks because they were angry over recent killings by the Bandidos.

“My perception is that the Cossacks have been flirting, if you will, with Hell’s Angels,” Cook told the Post. “If I’m a Bandido, my immediate reaction is: ‘These guys are going to try to make a move and bring an international gang into our state, which is going to cause a war.'”

The Bandidos already knew that the Cossacks weren’t going to play ball, and when push came to shove and these guys weren’t cooperating, all hell broke loose. You can tell by the number of weapons involved that these guys came looking for a fight. They were prepared.

Who Are the Victims of the Waco, Texas Biker Gang Shootout?

2. The FBI Has Named Them as an Outlaw Motorcycle Gang

A member of the Bandidos motorcycle gang stands outside the Bandidos Berlin Eastgate club on June 24, 2011. (Getty)

The FBI has named the Bandidos as an outlaw motorcycle gang.

The FBI says of the gang:

The Bandidos constitute a growing criminal threat to the U.S. Law enforcement authorities estimate that the Bandidos are one of the two largest OMGs operating in the U.S., with approximately 900 members belonging to 93 chapters. The Bandidos are involved in transporting and distributing cocaine and marijuana and are involved in the production, transportation and distribution of methamphetamine. The Bandidos are most active in the Pacific, Southeastern, Southwestern and the West Central regions of the U.S. The Bandidos are expanding in each of these regions by forming additional chapters and allowing members of supporting clubs, known as “puppet” or “duck” club members who have sworn allegiance to another club but who support and do the “dirty work” of a mother club – to form new or join existing Bandidos chapters.

3. The Gang Was Involved in the ‘Great Nordic Biker War’ With the Hells Angels in the 1990s

Members and supporters of the motorcycle gang, Bandidos, of Denmark, Norway, Sweden and Germany. (Getty)

The Bandidos were involved with what has become known as the “Great Nordic Biker War” with rival Hell’s Angels in Scandanavia from 1994 to 1997.

According to the website Gangsters Inc., the three-year war resulted in 11 murders and 74 attempted murders, with 96 people wounded.

The fighting included gun fights, car bombs and even an anti-tank missile fired at a prison cell holding a Bandidos member.

An “internal cleansing” led to the largest mass killing in Ontario, Canada’s history in 2006. According to CTV, eight men were fatally shot and stuffed into cars that were abandoned southwestern Ontario in April 2006.

Six men were convicted in the killings. The Bandidos former international president, Jeff Pike, of Texas, was accused by authorities of ordering the murders, but was never charged. 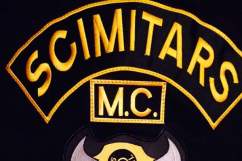 5. The Waco Shootout Was Called ‘One of the Worst Gun Fights’ in the City’s History

A Waco police officer leads a biker away from the scene of a shooting that left at least 9 dead and several others wounded. (Waco Police photo)

One officer called the shootout between the rival gangs “one of the worst gun fights that we’ve had in the city limits of Waco.”

Police told KXXV-TV that all of the victims were gang members who had gathered at the Twin Peaks restaurant. At least 18 others were, also all bikers, were injured. The extent of those injuries wasn’t immediately released.

Sgt. Patrick Swanton said innocent bystanders and officers somehow managed to escape injury, including a restaurant full of families just feet away from the one where the shooting started.

“Let’s just say it’s Sunday and someone was looking out for us,” Swanton said. “There were so many rounds fired from bad guy weapons here.”

Police said there were at least 100 bikers at the scene and at least five gangs involved. Swanton said the argument started over a parking issue.

More than 100 weapons were recovered at the scene.

“We were in marked cars. They knew we were here, they knew that we’ve been here at their past events. And it mattered not to them,” Swanton said at a news conference, which was posted online by KXXV. “That tells you the kind of level of people we’re dealing with.”

The police department’s spokesman, Sgt. Patrick Swanton, was clear about who the bikers are after a reporter said one of the bikers claimed that they are clubs, not gangs.

“They are a biker gang. We know exactly who they are,” Swanton said at a televised news conference. “A bunch of criminal element biker members that came to Waco and tried to instill violence into our community and unfortunately did just that.”

“These are criminals on Harley-Davidsons,” he said.

Loading more stories
wpDiscuz
20
0
Would love your thoughts, please comment.x
()
x
| Reply
Members of the Bandidos Motorcycle Club were among 5 gangs involved in a shootout in Waco, Texas that left 9 dead and 18 injured.