A 15-year-old girl has spoken out after she was violently arrested by a McKinney, Texas, police officer who was responding to a call for a disturbance at a pool party on Friday.

A video of the incident, which has gone viral, shows Dajerria Becton being dragged by the arm and thrown to the ground on her face by McKinney Corporal Eric Casebolt. The 40-year-old white officer, who has worked in McKinney for about 10 years, was suspended after the video was posted online.

Dajerria, who is black, was not charged.

1. Dajerria Says Casebolt Must Have Thought She Said Something ‘Rude’ to Him

The video shows Corporal Eric Casebolt yelling and cursing at Dejerria Becton and her friends, telling them to leave the area. He then turns away to speak to other teens. When he returns to Dejerria and her friends, he tells them to not “keep standing there running your mouths,” and says to leave “now.” Dajerria begins to walk away, but then Casebolt yells at her, runs over, grabs her by the arm, and drags her from the sidewalk onto a grassy area.

Dajerria spoke publicly for the first time about the incident on Sunday, telling Fox 4 News:

He told me to keep walking and I kept walking and then I’m guessing he thought we were saying rude stuff to him. He grabbed me and he like twisted my arm on the back of my back and he shoved me in the grass, he started pulling the back of my braids and I was like telling him that he can get off me because my back was hurting really bad.

The video shows Casebolt slamming Dajerria onto her face, and then holding his knee into her back. Her friends begin yelling at him to stop hurt him, while she cries out for her mother. Two of the teens watching move toward Casebolt, and he steps off of Dajeria, pulls out his gun and points it at them. As they run, Casebolt is grabbed by two other officers, who hold him back and then chase after the other teens.

Casebolt then drops back down on top of Dajerria and handcuffs her. 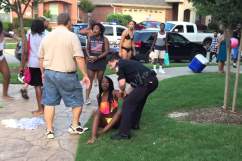 2. Casebolt Pulled on Her Braids & Kneeled on Her Back, Dajerria Says

Dajerria Becton told Fox 4 News that her back hurt as Casebolt kneeled on her back. She also said he pulled her braids when he was detaining her.

“It wasn’t right, I think his force was excessive,” Becton’s aunt told the news station.

3. Dajerria Says She Was Invited to the Party & Was Not Involved in the Fight

Dajerria Becton, on the ground in the bikini, was not charged. (YouTube)

Dajerria said she was an invited guest at the party and was not involved in the earlier fight between white parents and black teens that led to the police response.

Some residents of the community say more than 70 teens came to the Craig Ranch North Community Pool and were not supposed to be there. They said the party was unauthorized. But a local resident said she and her daughter organized the end-of-the-year party:

Teens who were at the community pool told Buzzfeed News the fight started between adults and teens when the adults made racist comments, including telling the black youths to “return to Section 8 housing.”

The teen who shot the video, Brandon Brooks, told Buzzfeed, “Everyone who was getting put on the ground was black, Mexican, Arabic. [The cop] didn’t even look at me. It was kind of like I was invisible.”

4. She Says Casebolt ‘Getting Fired Is Not Enough’

Dajerria told Fox 4 News that Casebolt being fired “is not enough.” Casebolt is currently on administrative leave while the department conducts an internal investigation.

McKinney Police Chief Greg Conley said at a press conference Sunday, “Several concerns about the conduct of one of the officers at the scene have been raised. The McKinney Police Department is committed to treating all persons fairly under the law. We are committed to preserving the peace and safety of our community for all our citizens.”

Mayor Brian Loughmiller said in a statement, “Having seen the YouTube video I am disturbed and concerned by the incident and actions depicted in the video. Our expectation as a City Council is that our police department and other departments will act professionally and with appropriate restraint relative to the situation they are faced with.”

5. Local Activists Plan to Protest Against Casebolt & the McKinney Police

The Next Generation Action Network is planning a peaceful protest in McKinney in reaction to the video.

The protest will be held at 6:30 p.m. at Comstock Elementary School. The group plans to then march to the pool where the incident happened.

Loading more stories
wpDiscuz
79
0
Would love your thoughts, please comment.x
()
x
| Reply
Dajerria Becton, the 15-year-old Texas girl who was violently arrested by Eric Casebolt in an incident recorded on video, is speaking out about what happened.