Jordan pictured with her former husband in 2000. (Jet Magazine)

Former Major League Baseball star Darryl Hamilton was found dead alongside his girlfriend in what cops are calling a tragic Father’s Day murder-suicide. His girlfriend has been identified as Monica Jordan, 44, of Pearland, Texas.

Police were called to Jordan’s home on the afternoon of June 21 after receiving a call about a domestic dispute, reports the Houston Chronicle. When officers arrived, at around 4:45 p.m. local time, they found the body of Hamilton in the front of the home, according to a police statement. He had been shot multiple times. Jordan was found elsewhere in the house, dead of a self-inflicted gun shot wound. KTRK reports that the couple lived together in the Island Breeze community in the Shadow Creek Ranch subdivision, in Pearland, a Houston suburb. House prices in the area are close to $500,000. Speaking to members of the media at the scene Lieutenant Onesimo Lopez said “At this point it does not appear that there was any kind of struggle. The incident occurred just inside the front door.” Rob Wu of My Fox Houston tweeted that a “3rd party” called 911.

Also inside the house was Jordan and Hamilton’s 14-month-old child. The unnamed infant was unharmed and is now in the care of the Texas Child Protective Services. A friend of Jordan’s told Heavy.com that she was “very quiet” which made the whole ordeal “so shocking.” That friend also said that, at the time of her death, Jordan wasn’t working.

According to Law.net, she was a trained attorney and most recently worked for Kellogg Brown & Root, L.L.C., a subsidiary of Haliburton. At the time of her first marriage, Jordan worked at disgraced energy giant Enron. Her wedding announcement from then, in 2000, says that she graduated from Florida State University and the University of Houston Law Center.

Jordan’s Facebook page offers little insight into her life. KHOU reports that Jordan and Hamilton lived at the home together with her three kids, including the 14-month-old. Her other children come from a previous marriage to a man named Rohaven Richards.

3. Darryl Hamilton Is Survived by His 3 Kids

On the day of his death, Hamilton posted a picture of him with two of his other sons to Facebook. That photo was accompanied with the caption “Happy Fathers Day to all the great Dads out there!!” Those sons come from Hamilton’s previous marriage to model Ursaline Steinke. Prior to his marriage to Steinke, Hamilton had been married to Access Hollywood anchor Shaun Robinson.

The Pearland Police Department believes that Jordan killed Hamilton before taking her own life. According to the Centers for Disease Control, 24 people in the U.S. are subjected to abuse from their immediate partner every minute. The Department of Justice said in 2008, that of all males murdered in the United States, nearly 5 percent are killed by their spouse.

5. Most Recently, Hamilton Had Been Working for the MLB Network

We mourn the passing of our friend and colleague, Darryl Hamilton. pic.twitter.com/GXcTDgkhi9

Since 2013, Hamilton had been working for the MLB Network as an on-air analyst. He had spent most of his playing career with the Milwaukee Brewers. 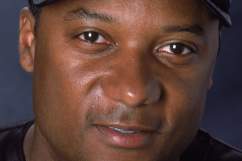