The driver of the Lexus, 69-year-old Kim Howe, was killed in the crash. The footage was recorded by a passing bus.

Jenner, who was not injured, has not been charged in connection with the February crash and the police investigation is ongoing. ET says the video may be used to help determine if Jenner was at fault.

The video shows Jenner’s Escalade hitting Howe’s white Lexus from behind, sending it into oncoming traffic. The Lexus then collides head-on with a Hummer, causing the Lexus’s front-end to crumple.

Jenner’s Escalade, which is towing a trailer carrying an off-road vehicle, is then seen striking a Toyota Prius, also from behind.

Howe’s family filed a wrongful death lawsuit against Jenner, who issued a statement after the crash:

My heartfelt and deepest sympathies go out to the family and loved ones, and to all of those who were involved or injured in this terrible accident. It is a devastating tragedy, and I cannot pretend to imagine what this family is going through at this time. I am praying for them. I will continue to cooperate in every way possible. 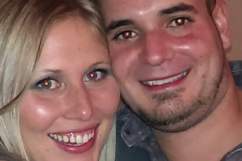