Republican Presidential candidate Donald Trump claims in his financial disclosure that he was paid $213,606,575 during the 14 seasons of “The Apprentice” reality show on NBC.

Trump, who was the host of the reality competition and does not own the rights to it, released his financial information on Wednesday, and revealed his net worth to be $10 billion.

NBC Universal parted ways with Trump after he announced his candidacy and made statements about immigration that angered the Hispanic community. Trump says he left NBC, and that they were upset he decided to run for president instead of returning to the show.

“The Apprentice” has been renewed for another season, and NBC is looking for a new host.

NBC has not commented on the financial disclosure. 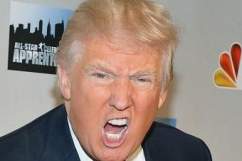 Loading more stories
wpDiscuz
2
0
Would love your thoughts, please comment.x
()
x
| Reply
Donald Trump released his financial disclosure today and says he made more than $200 million during the 14 seasons of The Apprentice reality show.