A St. Louis County police officer directs an oncoming car looking to evacuate the area after a police involved shooting during a protest march on August 9, 2015 on West Florissant Avenue in Ferguson, Missouri. (Getty)

An 18-year-old man was shot by police in Ferguson, Missouri, during protests on the one-year anniversary of Michael Brown’s death in the same St. Louis-area city.

The victim was shot by four plainclothes detectives, St. Louis County Police Chief Jon Belmar said. He is in surgery at a local hospital. Police said the victim fired at the officers during the incident and they returned fire.

The victim’s father identified him as Tyrone Harris Jr., a recent Normandy High School graduate who was “real close” with Brown, the St. Louis Post-Dispatch reports.

Brown, 18, was fatally shot by Ferguson Police Officer Darren Wilson on August 9, 2014, who was never charged in the death.

1. Police Said the Officer Came Under ‘Heavy Gunfire’ & Shot Back

St. Louis County police officers respond in an MRAP vehicle after shots were fired during a protest march on August 9, 2015 on West Florissant Avenue in Ferguson, Missouri. (Getty)

(1/2) A St. Louis County officer was involved in an officer-involved shooting after comin g under heavy gunfire. pic.twitter.com/L4PqopaEF1

(2/2) During the gunfire, at least 2 unmarked cars took shots. We will release more details when available. pic.twitter.com/luPnp6iXqZ

Plainclothes detectives were in the area tracking a person they believed to be armed with a gun. The officers said the victim shot at police officers and returned fire from inside a van. The victim then ran and turned back, as the detectives exited their vehicle and shots were fired again. Four officers, who were wearing vests identifying them as police, fired at the victim again.

The victim, Tyrone Harris Jr., is in critical, unstable condition, police said. It’s not known if anyone else was shot, according to police.

Harris’ father said his son was out of surgery at about 3 a.m.

Police said they believe the victim was involved in the shooting outside the market and left the area. A stolen gun was recovered from the scene, police said.

RT posted a video from its live stream showing several shots being fired outside the Ferguson Market:

The four officers were put on administrative leave.

2. Video Posted From the Scene Showed a Victim in the Street (Warning: Graphic)

A member of the local protest movement, Tony Rice, who goes by @Search4Swag on Twitter, posted video from the scene of the shooting showing police standing over the victim. Rice was detained, according to another tweet sent out along with the videos, but was later released.

I was just been released…cuffed and detain for not…leaving the scene…no one was really sure.

In the video, he can be seen pleading with officers to help the bleeding and motionless victim.

Here are more videos posted from the scene (warning graphic):

Video from CNN showed the moments as several shots rang out while they were interviewing Ferguson’s interim police chief, Andre Anderson. Watch it below:

The Associated Press also posted video from the scene:

Michael Skolnik, president of GlobalGrind, was near the scene of the shooting:

Behind building is where a body is. Lots of police. Behind me a yng girl screaming, "Why did they kill my boyfriend?" pic.twitter.com/07CML7yqnP

Police moved in and pepper sprayed a young man who approached them. They have now moved the girlfriend across the street. Very tense scene

Girlfriend was in excruciating pain. uncontrollable. They moved her across the street. This is unbelievable. Aug 9 pic.twitter.com/B9mROfPL8r

Watch a live stream from the scene at the link below: 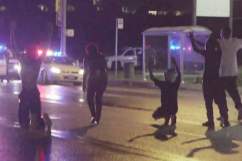 3. Heavily Armed Police Were in Standoffs With Groups of Protesters

A St. Louis County police officer takes cover behind a car after shots were fired. (Getty)

Heavily armed police in tactical gear were seen on the streets of Ferguson before the shooting and there were standoffs with protesters.

Stand off. Protestors and police face off on West Florissant. #Ferguson pic.twitter.com/ayryVhaAqD

At about 10:15 p.m., police began to warn protesters to clear West Florissant Avenue or face arrest in the area where the majority of the protests took place last year. Several hundred protesters had gathered to mark the anniversary of Brown’s death and some blocked traffic. Many cleared the area, but others remained.

At about 2 a.m., more than two hours after the shots were fired, police declared the protest on West Florissant Avenue to be unlawful, and fired smoke grenades at the remaining protesters, after warning them to clear the area.

Police now firing multiple smoke grenades down Canfield Dr despite people retreating, as they were asked

4. A Teen Was Arrested During a Different Shooting in Ferguson Earlier Sunday

Police officers in a MRAP outside a market in Ferguson. (Getty)

A 17-year-old from St. Louis was arrested early Sunday in a separate shooting during protests, St. Louis County Police said in a press release.

Trevion Hopson was charged with two counts of unlawful use of a weapon and one count of resisting arrest. He was held on $100,000 cash-only bond.

A 22-year-old victim was found in the parking lot of Family Dollar on West Florissant Avenue after shots were fired across from the McDonald’s restaurant nearby. The victim was taken to a local hospital with non-life-threatening injuries, police said.

According to the probable cause statement of facts:

Hopson attended the protests for the one year anniversary of the officer involved shooting with Michael Brown,” police said in the release. “During the protest, Hopson was wearing a backpack containing a firearm. Hopson pulled his firearm and shot at a specific target and was later seen by several law enforcement officers running down W. Florissant firing multiple shots into the fleeing crowd.

The victim stated he was standing in the parking lot of the strip mall located in the 9100 block of W. Florissant Road, across from the McDonald’s, when he was struck in the arm by a gunshot. The victim was transported to a local hospital with non life threatening injuries.

Hopson then put his firearm back in his backpack. When approached by law enforcement officers, the defendant dropped his backpack and ran from the scene. The foot chase continued for a while but Hopson was ultimately apprehended. Hopson confessed and both the gun and backpack were recovered.

Police have not said if the shooting was connected to the shootout between two groups later on Sunday.

5. Michael Brown’s Family & Protesters Gathered for a Memorial March Earlier in the Day

Michael Brown Sr. comforts his wife during a moment of silence for his son. (Getty)

Michael Brown’s family and protesters gathered earlier Sunday in Ferguson to remember and honor Brown one year after his death. A moment of silence was held and protesters marched peacefully through the streets.

The 18-year-old Brown was not armed when he was shot by Ferguson Officer Darren Wilson, who was not charged in the shooting.

Brown’s death started the #BlackLivesMatter movement and led to protests and a push for change after several similar incidents later in 2014 and in 2015.

There have been at least 704 people killed by police so far in 2015, according to The Guardian’s project, The Counted.

Loading more stories
wpDiscuz
0
0
Would love your thoughts, please comment.x
()
x
| Reply
A 20-year-old man was shot by police in Ferguson, Missouri, during protests on the one-year anniversary of Michael Brown's death.