Warning: The video below contains graphic violence and explicit language.

A bully who was attacking a blind high school classmate at Huntington Beach, California, was taught a lesson by a fellow teen, who knocked him to the ground in an incident that has gone viral after it was caught on video.

In the video, the bully can be seen hitting the blind teen, who is trying to cover his face. Suddenly, another teen comes into the video and knocks the attacker down to the ground with one punch. The other teen, who has since been identified as Cody Pine, then turns around to check on his classmate, Austin, asking him if he is OK.

Pine, the hero of the video, then stands over the bully and yells at him, “You’re trying to jump a f***ing blind kid, bro? What the f*** is your problem?” 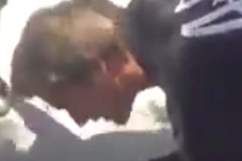 Huntington Beach Police said on Facebook that the incident happened Wednesday at about 12:30 p.m. and it is now under investigation.

“There is a video of the incident that has been circulating through social media,” the police department said Thursday afternoon. “This is an isolated incident involving these three students. School resource officers, detectives and school officials are working to find out exactly what happened. We will issue a press release later today as more information is obtained.”

“We are seeking additional witnesses and ask anyone with any information or additional video of this incident to please call the Huntington Beach Police Information Hotline at 714 375-5066. Anyone wishing to remain anonymous should call Orange County Crime Stoppers at 1-855-TIP-OCCS (855-847-6227). You can also click on the Submit a Crime Tip link on our Facebook page,” the department said.

The police department’s Facebook post received more than 200 comments, with most asking that they not charge the teen who stepped in to help the victim.

Police later said investigators “learned the victim, who has a degree of visual impairment, and suspect know each other and have a history of not getting along. As the victim walked past the suspect at school yesterday and verbal argument started, which resulted in the suspect hitting the victim several times.”

Then, “another student saw the fight and intervened to prevent the suspect from further assaulting the victim. The third party struck the suspect knocking him to the ground and stopping any further attack. It does not appear the incident has any connection with the victim’s disability.”

Police said the suspect was charged with misdemeanor battery and released to his parents. The teen who intervened will not be charged.

The school district posed a statement on its website:

On September 23rd, 2015, Huntington Beach High School leaders responded to an incident that occurred on campus during lunch. Shortly following this incident, a video of the event began circulating via various social media outlets. The school is now responding to this isolated incident by interviewing students and witnesses to determine exactly what happened. Additionally, the school is working with local authorities to define the appropriate actions necessary once all of the information is collected.

Read More
Breaking News, California, Video
A California teen stepped in to stop a bully from beating up a blind classmate, shoving the attacker to the ground. Watch the video here.