A former police officer of the year in Florida who was arrested on federal child pornography charges in 2015 has been sentenced to life in prison.

Ex-Port St. Lucie Police Officer Michael Harding, 27, was charged by criminal complaint with receiving and distributing material involving sexual exploitation of minors and possession of child pornography, the U.S. Attorney for the Southern District of Florida said Wednesday in a press release.

He pleaded guilty in February. He was sentenced in May, the U.S. Attorney’s office says.

Investigators said another image and video of “child related sexually explicit material were posted to the account.” According to the criminal complaint, investigators believe Harding uploaded some of the child pornography while working in his police car.

Ray said in the criminal complaint that location data from Harding’s police vehicle shows that on the dates and times the child pornography was posted to the Kik account allegedly belonging to Harding, he was in his police car. The vehicle was “in service and stationary for approximately one hour during each of the timeframes when child pornography was psoted, with the posts to the Kik chat room occurring toward the middle of the stationary periods.”

Ray wrote in the affidavit, “The vehicle being in use, coupled with the lack of vehicle movement and the posts occurring using cellular date, is consistent with the child pornography uploads taking place while Harden [sic] was working in his PSLPD vehicle.” Records show that Harding was working on an off-duty detail at traffic construction sites during both time periods.

2. He Was Caught by an Undercover Agent in the Kik Chat Room ‘#Toddlerf**k’

According to the criminal complaint, an undercover federal agent found the Kik account while undercover in a chatroom called “#toddlerf**k”

Ray said in the affidavit that the child pornography was posted by a Kik user “desthfromabovee,” which was created from a WiFi access point at Harding’s Port. St. Lucie home and from a phone owned by Harding.

According to the complaint, a thumb drive was found in a gun case at Harding’s home with a folder called “Captain planet” that had a subfolder named “Boys” with a video called “6 yo boy suck.” Another folder was called “Man+KID” and also contained a video file. The thumb drive also included photos of Harding and photos related to his work as a police officer, according to the complaint.

3. He Was Called ‘Flight Risk’ & ‘Danger to the Community’

Harding, who was appointed a federal public defender at his first court appearance was ordered held as a flight risk and danger to the community. A hearing on his pre-trial detention was set for Wednesday, September 30, according to court documents.

“These charges are very serious and I think it goes without saying that this type of behavior will not and is not tolerated in this department,” Port St. Lucie Police Chief John Bolduc told reporters.

In 2011, Harding was honored by The Hundred Club as the Fort Pierce Police Department’s Officer of the Year, according to an article on Fort-Pierce.net.

Fort Pierce Police Chief Sean Baldwin said Harding had “impressed us” during his time with the department. He issued 76 DUI citations in the year before he won the award, more than anyone else in the department.

According to records from the Fort Pierce Police released to WPTV, Harding was hired in 2008 and worked in road patrol, on the traffic unit and the crisis intervention team.

He joined the department after graduating from Indian River State College with a degree in criminal justice technology in 2008.

Harding left the Fort Pierce Police Department in 2012 and joined the Port St. Lucie Police. He was referred to as one of Fort Pierce’s “top cops” in an article about his departure.

Fort Pierce Chief Sean Baldwin cited Harding as an example for why his department should raise its salaries. Harding told the chief he felt the move to Port St. Lucie was in the best interests of him and his family, according to the WPTV report. His salary increased from $35,172 a year to $47,399.

5. He Is Married With Young Children

Harding is married and has young children, Harding said in court, according to Treasure Coast Newspapers.

He was married in June 2014, according to photos on his Facebook page. 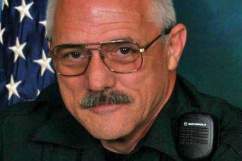 Loading more stories
wpDiscuz
3
0
Would love your thoughts, please comment.x
()
x
| Reply
Michael Harding, a former police officer of the year in Florida, was arrested on federal child pornography charges after being caught in a sting operation.