UPDATE: Gliniewicz’s death has been ruled a suicide that he staged to look like a homicide, police announced. Read more about the investigation here.

A veteran of the Fox Lake, Illinois, police department who was set to retire at the end of the month was gunned down while chasing three men Tuesday morning.

Lieutenant Charles “Joe” Gliniewicz, a beloved member of the department and community who was affectionately known as “G.I. Joe,” was killed just 29 days before he was set to retire, The Daily Herald reports.

A massive manhunt for the three suspects, identified only as two white men and a black man, continued into a second day Tuesday, with local and state police, along with federal agents hunting for the Gliniewicz’s killers.

1. He Was a 32-Year Veteran of the Fox Lake Department & a Married Father of 4 Sons

Lieutenant Charles Glinewicz, 52, was a 32-year veteran of the Fox Lake Department and was a lieutenant.

The officer was fun-loving and optimistic, retired Waukegan officer Thomas Poulos, who went to high school with Gliniewicz in Antioch, Illinois, told the Chicago Tribune. They graduated together in 1981.

Gliniewicz, who was known as Joe or Joey in high school, “loved his job, loved his kids, loved his wife … He was just a delight to be around. … Not a bad bone in his body,” Poulos told the Tribune.

He was a married father of four sons.

“He’s got four sons who are going to have to go on alone,” his mother-in-law, Terry Resetar, told the Tribune. 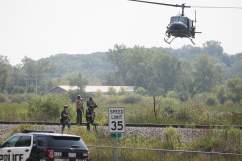 2. He Was an Army Veteran & a Leader of the Local Police Explorers

Gliniewicz was a volunteer with the local police explorers. (Facebook)

Gliniewicz, known affectionately as “G.I. Joe” in the community, was an Army veteran and was the longtime leader of the local police explorers, working with youth interested in law enforcement, the Northwest Herald reports.

He served in the Army from 1980 until 2007, in active duty and then as a reserve, leaving as a first sergeant, he newspaper reports.

He earned a master’s degree in criminal justice from Kaplan University, according to his Facebook page.

The Mayor of Fox Lake, Donny Schmidt, told reporters that Gliniewicz was “a very dear friend.”

“We lost a family member,” Schmidt said at an afternoon news conference, according to the Chicago Tribune. “G.I. Joe was the father of four boys and a dedicated officer.”

Nathan Muelfedler, the owner of Good Family Tattoo, said Gliniewicz was a regular customer. He said he did about half of the fallen officer’s body art, including tattoos of police badges.

“He was a super nice guy. He was always loud when he was here, you could hear him a mile away,” Muehlfelder told the Tribune. “He always did things for the community, especially with the police explorers. He was always a really happy guy. Never angry, always laughing. He was super strong for an older guy. He was ripped. He was doing what he liked to do.”

3. He Radioed That He Was Pursuing 3 Suspects Before He Was Shot

According to CBS Chicago, the officer radioed in at about 7:50 a.m. and said he was pursuing three suspects after looking into their “suspicious activity.”

He said he was in a foot pursuit, but the department then lost radio contact with him. Backup was sent to the area.

4. Officers Found Him Without His Gun &Other Gear

After police lost radio contact with Gliniewicz, they began searching for him. He was found in a marshy area suffering from a gunshot wound. He had been stripped of his gun and other gear, the Chicago Tribune reports.

According to the Chicago Sun-Times, an officer could be heard saying on the radio, “… send everybody you possibly can … officer is down …”

Police officers search for suspects in the killing of a Fox Lake officer. (Getty)

Schools have been put in lock down and officers have swarmed the town in the search for the suspects.

Fox Lake is a village of about 10,500 residents located about 1 hour and 20 minutes north of Chicago in Lake County.

The manhunt has paralyzed the town.

“This is crazy, they think they are hiding behind my house so I can’t go home,” Christina Barcal told the Chicago Sun-Times. She said those who were in their homes are not allowed to leave. “My neighbor’s dogs had to go out so an officer took her dogs out to pee.”