If the weather isn’t cooperating where you are tonight for the rare supermoon lunar eclipse, don’t worry, you can check it out online.

The supermoon and lunar eclipse will coincide on September 27, 2015, for the first time in more than 30 years, and it won’t happen again until 2033, NASA says.

The supermoon eclipse will begin at about 9 p.m. Sunday night in the Eastern time zone.

It will last one hour and 12 minutes, according to NASA’s scientists. 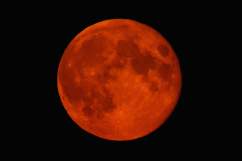 When Is the Supermoon Lunar Eclipse & Where Can You See It?

Here is where you can watch the supermoon eclipse live stream online:

Another option to watch the supermoon eclipse live stream online is from Sky & Telescope Magazine. Watch that stream above. 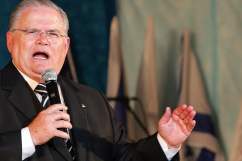 NASA Will Stream Video From Around the United States

NASA says it will be streaming live video starting at 8 p.m. Eastern until 11:30 p.m. Click here to watch the stream.

The live feed will “offer views of the eclipse from not only the Griffith Observatory, but the Adler Planetarium in Chicago, Fernbank Observatory in Atlanta and other locations across the United States. The live feed is an alternative for those experiencing less-than-optimal weather or light-polluted night skies.” 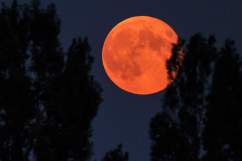 The Slooh Community Observatory Is Streaming From 3 Different Countries

The Slooh Community Observatory is also offering a live stream of the eclipse. You have to sign-up to watch, but registration doesn’t cost anything for the first month and gives you access to a large archive of past streams.

The stream begins at 8 p.m.

The stream’s hosts will be “reporting from locations all over the world, bringing you views of the eclipse from three different countries, including one from the world-famous Stonehenge monument,” Slooh told Space.com.