A disturbing and graphic video shows a Moscow, Russia, babysitter walking in the street while holding a child’s severed head in her hand.

The Guardian reports that the woman killed the young girl and cut off her head before setting an apartment on fire and fleeing.

The woman then pulled the head out of a bag near the Oktyabrskoye Pole station, the newspaper reports. LifeNews, a Russian tabloid site, reports that the child was a 4-year-old girl name Nastya. Her body was found in the burned apartment. The woman has been identified by a Russian newspaper as Gyulchekhra Bobokulova, 38, of Uzbekistan.

You can watch the uncensored video below:

According to LifeNews, the woman was asked for identification by a security officer at the station. She then pulled the head out and threatened to blow herself up. She called herself a terrorist.

In a statement, translated by the BBC, the Moscow Investigative Committee says, “According to preliminary information, the child’s nanny, a citizen of one of the Central Asian states born in 1977, waited for the parents and elder child to leave the flat and then, for reasons not established, murdered the infant, set fire to the flat and left the scene,” it added in the statement.”

In the video, the woman, clad in a burka, can be heard shouting the Islamic phrase Allahu Akhbar, or “God is Good.”

Gyulchekhra Bobokulova, a nanny suspected of killing a young girl in her care, looks out from a defendants’ cage during a hearing at a court in Moscow, on March 2, 2016. (Vasily Maximov/AFP/Getty)

She also says, “I am a terrorist. I am your death.”

The woman is undergoing psychiatric tests, according to the investigative committee.

“I was on my way to the metro station from home,” Polina Nikolskaya, a Russian reporter, told Reuters. “She was standing near the metro entrance and caught my attention because she was screaming Allahu Akbar. I saw that she had a bloodied head in her arms, but I thought it was not real. People in the crowd said it was real.” 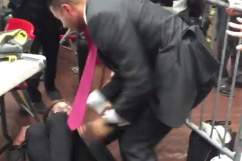