Three teen girls have been charged in the homicide of a 16-year-old high school girl who died after a fight in a Delaware high school bathroom, the state’s Department of Justice announced.

Amy Inita Joyner-Francis died April 21, 2016, after the incident at Howard High School of Technology in Wilmington.

Trinity Carr, 16, was charged with criminally negligent homicide, Attorney General Matt Denn said in a statement. Authorities plan to seek to have her prosecuted in adult court. Two other teens, Zion Snow and Chakeira Wright, were charged with third-degree criminal conspiracy.

Joyner-Francis’ death spread quickly across social media, with #RIPAmy trending worldwide on Twitter on the day she died.

1. Carr Was the Only One of the Trio to Physically Assault Joyner-Francis, Prosecutors Say

Trinity Carr was the only one of the girls to physically assault Amy Joyner-Francis, according to the Department of Justice. The incident was a planned confrontation in the bathroom, prosecutors said.

Video obtained by investigators shows Carr hitting Joyner-Francis in the head and torso with a closed fist, Delaware Online reports. According to prosecutors, the video shows Carr leave the bathroom, while Joyner-Francis tries to stand-up, but seems disoriented and collapses to the floor.

The fight was recorded on a cell phone video. You can see a screenshot below:

Initial reports indicated the fight was over a boy, but Joyner-Francis’ friends later disputed that. One of her friends, Kayla Sutrell, told Delaware Online that the victim said she was going to the bathroom on the morning of April 21 to “settle the beef.” Sutrell stressed the animosity had nothing to do with a boy.

Delaware Online reports that Joyner-Francis was rushed to A.I DuPont Hospital for Children in critical condition. She was pronounced dead en route.

2. Joyner-Francis Suffered Sudden Cardiac Death Because of a Heart Defect, But ‘Physical & Emotion Stress’ Was a Factor

The Delaware medical examiner’s office determined Joyner-Francis’ cause of death was “sudden cardiac death due to large atrial septal defect,” the Department of Justice says.

The medical examiner’s office said a contributing factor was “physical and emotional stress due to physical assault.”

The Department of Justice said, “The autopsy did not detect any internal injuries or significant blunt force injuries. In layman’s terms, the medical examiner determined that Amy died from a cardiac incident that she was vulnerable to because of a pre-existing heart condition, but the cardiac incident would not have occurred if she had not been assaulted.” 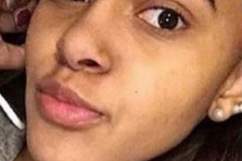 3. The Girls Allegedly Planned the Attack in the 20 Hours Before the Incident

The trio planned the assault through written and oral communications in the 20 hours before the attack, prosecutors said in court documents, according to Delaware Online.

Attorney General Matt Denn said the most serious charges possible were brought against the other two girls, Zion Snow and Chakeira Wright.

4. The 3 Girls Were Suspended From School After the Incident

Witness tells me fight was one on one then others jumped victim. Victim hit head on sink then lost consciousness. pic.twitter.com/cKEOB8OvJp

The three girls were suspended by Howard High School of Technology immediately after the incident, but were not charged until May 9.

On April 29, police said they were still investigating.

“Unlike TV, these (investigations) do take time,” Police Chief Bobby Cummings told reporters, according to Delaware Online. “There are over 3,000 print pages of data alone that must be painstakingly reviewed by investigators in this case.”

5. Carr Faces Up to 8 Years in Prison if She Is Found Guilty

Candles burned the am after Thurs night vigil for #AmyJoyner, 16. The Howard High student died after a fight. pic.twitter.com/FpyFrqjmFh

Prosecutors will seek to have Carr tried as an adult in Superior Court, “because of the severity of the offense,” the Department of Justice said in its press release.

She faces up to eight years in prison on the criminally negligent homicide charge.

Loading more stories
wpDiscuz
0
0
Would love your thoughts, please comment.x
()
x
| Reply
Trinity Carr, 16, has been charged with criminally negligent homicide in the death of Delaware girl Amy Joyner-Francis, who died after a school bathroom fight.