Michael Caputo has resigned from the Donald Trump campaign, making him the second member of the staff to exit in one day.

This morning, it was announced that campaign manager Corey Lewandowski would be resigning. He was reportedly fired after a coup within Trump’s inner circle, lead in part by his daughter Ivanka and son-in-law Jared.

Not long after that news broke, campaign adviser Michael Caputo took to Twitter to express his relief that Lewandowski was gone and to compare the former manager to the Wicked Witch of the West.

Hours after that tweet, Caputo left the campaign, according to CNN.

“I regret sending out a tweet today alluding to the firing of Corey Lewandowski,” Caputo said. “In hindsight, that was too exuberant a reaction to this personnel move. I know this is a distraction from the kind of campaign you want to run, so I’m resigning my position as director of communications for caucus operations at the 2016 Republican Convention.”

However, a source told Yahoo News that resigning was not Caputo’s decision and he was actually fired from the campaign. Caputo continues to deny that, telling Yahoo that he left because “unforced errors have no place in this campaign.”

These campaign shakeups come as the Trump campaign struggles to catch up to Hillary Clinton in the polls. At the top of Trump’s inner circle is Hope Hicks, press secretary who reportedly had a personal feud with Lewandowski throughout his time working there. 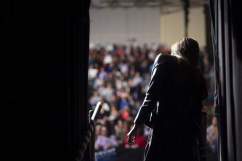