Alton Sterling, right, and a screengrab from the bystander video of the fatal shooting by Baton Rouge Police. (Twitter)

A 37-year-old man was fatally shot by police in Baton Rouge, Louisiana, early Tuesday morning in an incident caught on video by a witness.

The 48-second video showing the shooting of Alton Sterling has sparked outrage in the community and on social media.

The officers have been identified as Officer Blane Salamoni and Officer Howie Lake II. The officers, both 28-year-olds with less than five years with the department, have been placed on paid administrative leave.

Sterling was shot and killed about 12:35 a.m. Tuesday, The Advocate reports.

Salamoni and Lake had responded to a disturbance call in which the caller said someone had been threatening him with a gun, police told the news station.

Baton Rouge Police have released few details about the shooting, including whether Sterling was armed. But a witness told The Advocate that Sterling did have a gun, but was not holding it or reaching for his pockets during the incident.

Two Baton Rouge Police officers, Blane Salamoni and Howie Lake, were responding to a “disturbance call from a complainant who stated that a black male who was selling music cd’s and wearing a red shirt threatened him with a gun,” police spokesman Corporal L’Jean Mckneely Jr. said in a statement.

Mckneely said an “altercation between Sterling and the officers ensued. Sterling was shot during the altercation and died at the scene.”

The altercation was caught on cell phone video by a bystander.

One of the officers then says something somewhat unintelligible, that appears to be, “… he’s going for the Taser!”

A zoomed-in version of the incident was posted to Twitter:

Newly released video recorded by Muflahi shows an officer removing a gun from Sterling’s pocket after the shooting. You can watch the video below (Warning – Graphic):

Sterling, who was later pronounced dead at the scene, is still moving after the shooting. The coroner said he died of multiple gunshot wounds to the back and chest.

The officers both said they “believe they were completely justified in using deadly force,” Moore said.

2. Sterling Was Shot Multiple Times in the Back & Chest, the Coroner Says

East Baton Rouge Parish Coroner Dr. William “Beau” Clark would not say exactly how many times Sterling was shot. He said no other injuries were found. Clark also said the results are preliminary and a toxicology report has not been completed.

You can read more about the coroner’s findings at the link below:

3. Local Authorities Have Turned Over the Investigation to the FBI & Justice Department

After calls from Sterling’s family, local activists and politicians, the Baton Rouge Police Department and East Baton Rouge District Attorney’s Office decided to turn over the investigation to federal authorities. It will now be handled by the FBI and the Justice Department, with the assistance of the Louisiana State Police, Governor John Bel Edwards said.

Officials announced the decision at a Wednesday press conference, which you can watch above.

“Based on my review, I thought this would be better handled by an independent agency,” District Attorney Hillar Moore said. He said the officers have already been interviewed by local police.

“The officers feel they were completely justified,” Moore said.

Dabadie said, “It is our goal and our mission to make sure that a thorough, just, transparent and independent investigation be conducted into this incident.”

The city’s Mayor-President, Kip Holden, said there will not be a “cover-up” and added that he has received calls from White House officials and Baltimore Mayor Stephanie Rawlings-Blake in the wake of the shooting.

Governor Edwards called the video “disturbing,” and asked for unity, peace and calm.

“Violence and destruction of property is not an answer to anything we face today,” Edwards said.

4. Sterling Was Registered as a Sex Offender After Impregnating a 14-Year-Old Girl When He Was 20, But His Family & Friends Say He Wasn’t a ‘Bad Guy’

Mignon Chambers, Sterling’s sister, told WAFB-TV that he was a father of five who has been selling CDs outside the store for years.

Sharida Sterling, his cousin, told The Advocate, “He would have never fought the police, he wouldn’t have pulled a gun, he would have been too scared.”

But Sterling was also a registered sex offender, state records show. He was convicted in 2000 of carnal knowledge of a juvenile and was released from prison in 2004. According to court documents, Sterling, then 20, was arrested after he impregnated a 14-year-old girl. The girl’s mother reported him to police.

She spoke out passionately during a family press conference Wednesday and said she would fight for justice for Sterling.

You can read more about his record at the link below:

Despite his record, Darian Gardner, his friend, told The Advocate that Sterling, “didn’t cause any harm to the community. He was nice. He wasn’t a bad guy. He was respectable.”

He was known as “CD Man” and was living in a shelter in Baton Rouge, Living Waters Outreach Ministries in recent months, The Advocate reports.

“Whatever he cooked, he cooked enough for everybody,” fellow resident Calvin Wilson told the newspaper. “I never saw him coming in here with a weapon, and I never saw him drunk.”

Wilson described the facility as a place for people looking to get back on their feet and said Sterling had a job as a cook.

“He wasn’t a bad person,” another resident, David Solomon, told the newspaper.

Sterling’s family acknowledged his criminal record, but said that should have no bearing on the investigation and said he was moving past his history.

He was raised by his aunt, Sandra Sterling, who told the Washington Post he was a “generous giant” who had “paid his debt to society.”

His cousin, Elliott Sterling, told the Post, “He was really good at selling those CDs. If somebody asked for blues or country music, he’d know it all. He couldn’t make it in a regular job but he could make it selling CDs. He could converse with everybody.”

Elliott Sterling said his cousin’s children will now grow up without a father, like Alton did.

“He had a hard life. He didn’t have no momma, no daddy,” Elliott Sterling told the Post. “He wasn’t stable at all. He lived day to day based on what he made.”

A GoFundMe account set up by writer and producer Issa Rae to help his children has raised more than $40,000. 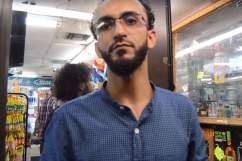 5. The Officers Were Wearing Body Cameras, But Officials Say They ‘Fell Off’ During the Incident

His aunt, Sandra Sterling, told the Washington Post she is glad the video of the shooting is being spread online.

“That video is everywhere now,” she said. “It hurts me to see it. I can see the picture but I don’t want to hear the sound. The sound gets me. It gives me an anxiety attack when I hear the sound.”

She said the story had been “twisted” by police and the media to make Sterling seem like the “bad guy” before the video emerged.

“They had already prosecuted him,” she said. “Now their attitude has changed.”

Click HERE or on the “NEXT PAGE” button below to see what Sterling’s family said during an emotional press conference and to read more about the two officers involved in the shooting.

Loading more stories
wpDiscuz
681
0
Would love your thoughts, please comment.x
()
x
| Reply
A 37-year-old Baton Rouge, Louisiana, man was fatally shot by police in an incident caught on video by a witness that has sparked protests in the city.