Alton Sterling was a 37-year-old black man who was shot to death in a confrontation outside a convenience store with police in Baton Rouge, Louisiana early on the morning of July 5, 2016.

His death sparked outrage, protests, and an investigation by the U.S. Justice Department. Both the Justice Department and state Attorney General have now declined to file criminal charges against the police officers involved in the case.

The officers’ handling of the confrontation came under intense scrutiny from the public at the time in part because of cell phone video. The debate over the officers’ conduct included discussion of Sterling’s criminal record and whether it is at all relevant when assessing the officers’ conduct. However, the legal questions in the case focused on what happened in the confrontation between Sterling and the officers right before he was shot. Sterling’s case file does provide a fuller biography of the man, however.

A review of court records by Heavy shows that Sterling was well known to Baton Rouge police, although the two officers involved in the shooting — Blane Salamoni and Howie Lake II — are not mentioned in documents pertaining to Sterling. You can read all of Sterling’s Baton Rouge criminal case details here:

Records show that Sterling was a registered sex offender with a lengthy criminal record that included convictions for weapons offenses, confrontations with police officers, property crimes, and domestic violence and other batteries.

Here’s what we know about his criminal history:

The documents in Sterling’s Baton Rouge court file show Sterling was accused of these offenses (some are convictions, some only arrests, some were dismissed and a few are traffic matters. The dates represent date of offense):

Sterling Had Previous Confrontations With the Baton Rouge Police

One incident stands out in the lengthy file; it involved a wrestling match with an officer that involved a gun. In 2009, the affidavit of probable cause contends that a police officer tried to pat down Sterling when Sterling resisted arrest, and the officer ended up “wrestling with the defendant on the ground” at which time a “black semi auto gun fell from his waistband.” The officer grabbed the back of Sterling’s shirt during the incident, and he was able to arrest him without further incident.

In another probable cause affidavit, an officer named A. Miller wrote that he was patrolling when he saw a gray Chrysler carrying Sterling traveling 65 in a 45 mile per hour speeding zone. He pursued and stopped Sterling, who did not have proof of insurance.

An officer with the last name of Moses responded as backup, and the officers let Sterling retrieve his belongings in a duffel bag, the affidavit says. Sterling walked away and said he would “have the officers’ badge and jobs.” He went to a bus stop and then walked back across the street, and laid on the pavement in a prone position, before saying again that he would have the officers’ badge and jobs and telling them to “go ahead and beat him down regardless of the outcome,” said the court affidavit.

Sterling, who sometimes went by the names Alton Bertell Sterlings or Aiton B. Sterling, was a registered sex offender, according to a database maintained by the East Baton Rouge Parish Sheriff’s Office.

Sterling is listed as 5 foot 11 inches tall, 310 pounds, with tattoos on his left arm, right arm, and left hand. His status is now listed as “inactive-deceased.”

Sterling’s offense is described as committing “carnal knowledge of a juvenile.” He was convicted on September 20, 2000 in Louisiana and released on October 3, 2004.

Court records show the victim was a 14-year-old girl at the time of the offenses. According to the charging document on file in the courthouse, the victim’s mother had discovered that she was pregnant after taking her to the doctor. The document says that Sterling, then 20, had been dating the victim for about seven months and having sexual intercourse with her in her bedroom. The charging document says he admitted to the mother having sex with her daughter and exhibited an “I don’t care” attitude. Heavy.com is withholding the name of the victim and mother and all victims in the Sterling court file.

According to the sentencing document in the court file, the judge gave Sterling 5 years of hard labor in the Louisiana prison system, but then gave him credit for time he already had served and suspended the balance of the sentence, putting him on probation. He was ordered to pursue a GED or trade and to perform community service, among other conditions of probation, the sentencing document says.

The case was then re-sentenced, and Sterling, who had pleaded guilty, was sentenced instead to 2.5 years of hard labor in the Louisiana prison system.

The court file said he was accused of not registering as a sex offender or notifying authorities of his change of address, requirements of the law.

Sterling Was Convicted Of Illegally Carrying a Gun & Other Weapons Offenses

Alton Sterling was accused of intending to distribute, produce, or manufacture marijuana, court records show. In conjunction with the same charge, he was convicted of “knowingly and intentionally possessing a firearm while in possession of a controlled dangerous substance.” The drug charge was dismissed when he entered a guilty plea, the court records show.

Read more about Alton Sterling and the shooting here.

In 2011, Sterling was sentenced to 5 years of hard labor in the Louisiana prison system concurrent with any other sentence.

In another probable cause affidavit, an officer, Corporal Paul Lockett, wrote that he was dispatched to a report of suspects trespassing at a home, where they had kicked in the front door and threatened the victim and her husband with a gun. In a probable cause affidavit accusing Sterling of burglary, the victim said that her door was kicked in and suspects presented several guns and made verbal threats.

In a sheriff’s affidavit on another date, Sterling was accused of breaking into a woman’s apartment by making a hole in the wall, and then trying to sell her goldfish for $20.

Sterling was also accused of possessing ecstasy and marijuana in different cases, the court file says.

Sterling Was Convicted of Domestic Battery in 2008

The court file says that Alton Sterling was convicted of domestic battery in 2008 against a member of his own household. Heavy.com is withholding the victim’s name. According to the court file, Sterling also pleaded guilty in this offense, which occurred on March 11, 2008. He was sentenced to 90 days in jail, with credit for time served.

A screen shot from the citizen video of Sterling’s shooting.

In a separate case in 2006, Sterling was charged with two other people in a case involving a battery with a dangerous weapon. According to the court file, he was charged with aggravated battery, simple criminal damage to property, and unauthorized entry to an uninhabited dwelling. Again, Sterling entered a plea deal. In it, charges were amended to disturbing the peace, simple battery, and simple criminal damage to property. He was sentenced to spend 6 months in prison for each count, served concurrently (which means at the same time).

In another case, Sterling was charged with a property crime: Simple burglary. Court records say he pleaded guilty in the May 2005 offense, which was amended to illegally possessing stolen property, a misdemeanor. He received 6 months in prison, but the sentence was suspended and he was placed on probation.

In 1996, court records show, he was charge with another simple battery case, but it was dismissed.

Mignon Chambers, Sterling’s sister, told WAFB-TV that he was a father of five who has been selling CDs outside the store for years. “I really wanna know more about what happened, about the whole situation, because my brother didn’t deserve it. He didn’t deserve it at all,” Chambers told the news station. Sharida Sterling, his cousin, told The Advocate, “He would have never fought the police, he wouldn’t have pulled a gun, he would have been too scared.” (Facebook)

Read more about Alton Sterling and the shooting here.

In another domestic violence battery case, the charging document says that a girlfriend of Sterling’s said she was battered at a Mobil station and that “she and the defendant have been involved in several physical confrontations” and that she “had been battered during their relationship.”

In yet another case, Sterling was accused of entering a man’s house and demanding money. He then pushed and shoved the man, “tearing up furniture” and then others arrived to help destroy items, including appliances, the court affidavit says. The court record says that a police officer stopped Sterling, who said he had “tore up the apartment” because the victim had stolen his money. He gave his name as “Otis Deesnuts” and made a reference to a killing and having a barbecue, court records say. 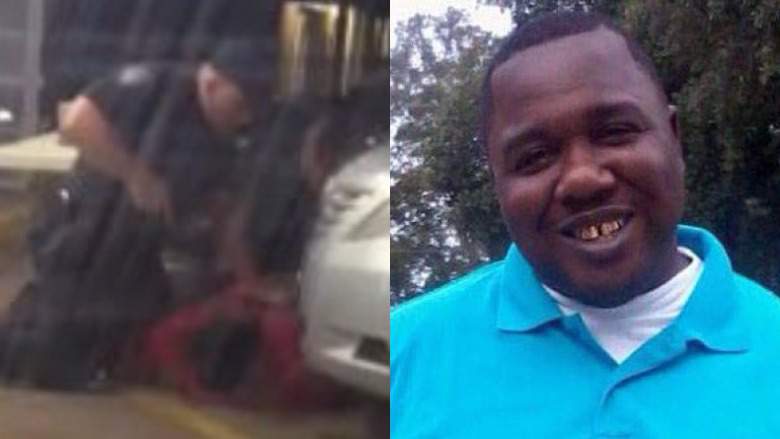