A woman named Lavish Reynolds has posted a dramatic Facebook Live video showing a bleeding man, Philando Castile, next to her in a car as a police officer who just shot him points a gun at him through a car window. Philando Castile, 32, died at the hospital a short time later, WCCO confirmed through his family. “Police shot him for no apparent reason, no reason at all,” said Reynolds, who sometimes goes by the name “Diamond,” at one point.

On Thursday, Minnesota Governor Mark Dayton questioned whether Castile would have been killed if he was white, The Washington Post reports. Castile was African-American. Dayton, who is asking for a federal investigation, said:

Would this have happened if the passengers were white? I don’t think it would have. All of us in Minnesota are forced to confront that this kind of racism exists.

Although Reynolds says the pair were stopped for having a broken taillight she says they didn’t have, new audio has surfaced through Kare 11 TV in Minneapolis that may show police stopped Reynolds because the officer thought he looked like an armed robbery suspect due to the width of his nose.

The possible dispatch audio has an officer saying, “I’m going to stop a car. I’m going to check IDs. I have reason to pull it over.” Listen here.

“The two occupants just look like people that were involved in a robbery,” the man said to be an officer adds. “The driver looks more like one of our suspects, just ‘cause of the wide set nose,” the officer continues.

However, Castile’s criminal history in Minnesota was minor, almost entirely for traffic, and with nothing at all approaching the seriousness of an armed robbery. The TV station said it received the audio from a viewer and hasn’t been able to verify it with police, although the license plate mentioned matches Castile’s. However, the station now says that Castile’s attorney, Tom Kelly, as verified some details in it and that “They had a reasonable suspicion he may match the description of the suspect in the earlier robbery.” He also said the car had a brake light out and that Castile was not himself a robbery suspect.

Heavy has reached out to a police spokesperson and the Bureau of Criminal Apprehension for verification; KARE noted that St. Anthony police had released photos and details about a July 2 gas station robbery in the area and said the officer’s lawyer confirmed that was the robbery in question. You can see photos of the gas station suspects here. BCA’s spokeswoman says the agency, which is investigating the shooting, has nothing to say about the audio because the agency didn’t release it; asked for the dispatch audio, she said data in the case wouldn’t be released until it concluded.

The police shooting occurred in Falcon Heights, Minnesota. Falcon Heights, a suburb of St. Paul, is the home of the Minnesota State Fair and prides itself on “Families, Fields, and Fairs.” The officer was with the nearby St. Anthony Village Police Department, which provides police patrols to Falcon Heights.

A child (she was 4-years-old, said the St. Paul Pioneer Press) was in the car when the police officer, who has not been identified, shot Philando Castile. The child could be heard crying in the background as the emotional-sounding officer continues to point his gun through the car window as Castile bleeds through his white T-shirt and an upset Reynolds talks live on Facebook, imploring God to save him. Facebook Live allows people to stream live video directly from their cell phone onto their Facebook page.

Update: man shot by police in #FalconHeights died at HCMC. His mom identifies him as Philando Castile, 32 #wcco #cbs pic.twitter.com/OKxMP0VG65

In the video, Lavish Reynolds says to Philando Castile, “Stay with me… We got pulled over for a busted taillight in the back.” She also said in the video that police asked Castile, the driver, for his license and registration and, as he reached for it, he told officers that he had a firearm and a concealed carry permit. The officer then shot him, she said (Castile had been stopped for traffic issues before; he was booked for driving after revocation in the past; the Minneapolis Star-Tribune said his record consisted of “misdemeanors and petty misdemeanors” only. NBC News reports he had 31 traffic-related misdemeanors, such as driving without a muffler and speeding.)

Philando Castile, 32, worked in a school cafeteria in St. Paul, the Star-Tribune said. A parent of a child in the school posted a tribute to him on Facebook, saying “This was a GOOD MAN” who pushed extra food on children and gave a borderline autistic child constant hugs.

In the video, Reynolds says that Castile is “licensed to carry” and was “trying to get out his ID” and “he let the officer know he had a firearm, and he was reaching for his wallet, and the officer just shot him. … He just shot his arm off.” Reynolds told the media Thursday that Castile was shot five times; authorities have not released that detail, NBC News reports. The Minneapolis Star-Tribune reports, through a source, that Castile had a permit to carry a gun from Hennipen County, Minnesota (some blog reports have used a Ramsey County sheriff’s Tweet that Castile didn’t apply through that county as evidence he didn’t have a permit; however, the newspaper says he got it when he lived in Robbinsdale, not Ramsey County.)

Police confirmed to WCCO that the shooting originated with a traffic stop; they said a gun was recovered at the scene but released few other details. They told the Star-Tribune that two officers were at the scene, including an officer who had arrived as backup. The newspaper said the shooting occurred around 9 p.m. You can read the police press release here: Press Release Officer Involved Shooting.

A citizen video of the scene was also posted on Twitter:

By the early morning hours of July 7, upset people, some with signs, had gathered at the scene of the shooting, as Castile’s car was towed away, and the family gathered at the hospital, comforted by a pastor and the local NAACP president. Before sunrise on Thursday, several hundred protesters had gathered at the governor’s mansion, and put police tape over the gates:

Castile’s sister told the Washington Post that as of 1 a.m., the family had not been able to see him. Castile’s cousin, Clarence Castile, told the Minneapolis Star-Tribune that Castile died at 9:37 p.m. Wednesday night, only a few minutes after Philando arrived at Hennepin County Medical Center.

Reynolds recorded the video on Facebook Live while the situation was still ongoing, and the police officer could be seen with his firearm pointing at the couple through the window of their vehicle.

“I told him to get his hand out; I told him not to reach for it,” the officer says. Reynolds adds: “Oh my God, don’t tell me he’s dead, please don’t tell me my boyfriend just went like that.”

“I told him to get his hand off!” the officer says at another point. He tells Reynolds to keep her hands where they are. Castile is heard moaning in the video, and his T-shirt is partially soaked through with blood. Reynolds was taken into custody.

“Please, officer, don’t tell me he’s gone; please don’t tell me that you did this to him. You shot four bullets into him, sir,” Reynolds implores.

“Get the female passenger out,” an officer shouts. Officers then arrest Reynolds and tell her she is being detained while “this is all sorted out.”

News of the police shooting and Facebook Live video hit Twitter on July 6, just a day after the Baton Rouge police shooting death of Alton Sterling, also captured on cell phone video (but not streamed live) provoked protests and a Justice Department investigation:

Police surrounding this car on Larpenteur and Fry in #FalconHeights. Unclear why at this point. Waiting for info. pic.twitter.com/ogz0INKJ37

One of my coworkers texted to tell me about the shooting in Falcon Heights. As a Black woman, she's scared of this world.

Man the police just shot another Blackman in falcon heights MN. His girlfriend in the car with their kid and she was recording it Live! Wtf

Police on scene of a shooting in Falcon Heights. pic.twitter.com/pbhhaLwuU4

Minnesota has had controversial police shootings in the past. 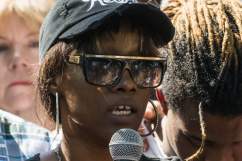 Read more about Philando Castile in Spanish at AhoraMismo.com: 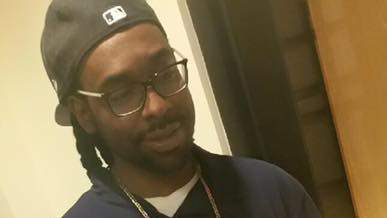