Jerry Falwell Jr. is the president of Liberty University in Lynchburg, Virginia and spoke at the Republican National Convention on the last night of the event. The theme was “Make America One Again” and he made the case for why Evangelicals like himself should support Trump.

In his speech Thursday, Falwell introduced himself and his family’s roots in American history. He also noted that some of the most successful politicians weren’t career politicians.

“Our founding fathers envisioned a government that existed only to protect these god-given rights,” Falwell said, referring to the rights outlined in the Declaration of Independence, “And a nation governed by citizen legislators. The most effective politicians were never career politicians, but surveyors, architects, ministers, farmers, businessmen and even actors who were successful in the private sector before serving in government.”

Falwell also recalled a story where his father joked on CNN that he dreamed Chelsea Clinton interviewed him. His father told Clinton in the dream about “the three greatest threats facing this nation: Osama, Obama and yo mamma.”

Falwell first endorsed Trump back in January, which was questioned by many because Trump has been married three times. In an op-ed for the Washington Post, Falwell said it was possible to support someone who had been divorced. “As I said, Jimmy Carter is a great Sunday School teacher but the divorced and remarried Hollywood actor Ronald Reagan saved this nation when it was in nearly the same condition as it is today,” Falwell wrote at the time. 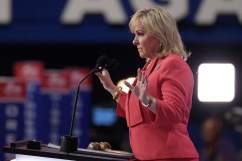