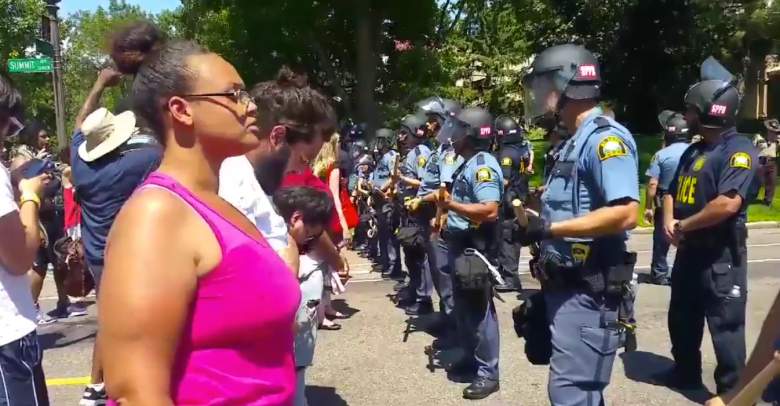 Protesters stood outside the governor’s mansion in St. Paul, Minn. Some were arrested, some came back when police pulled back. (Twitter)

Police on Tuesday began arresting protesters who have camped outside the Minnesota governor’s mansion for nearly three weeks since the death of Philando Castile, the Falcon Heights man who was shot by St. Anthony police.

More than 20 people have been arrested by St. Paul police, according to the Star Tribune. Officers cited “unlawful assembly” for their reason to arrest the demonstrators.

Police had five demands for the protesters, who have remained peaceful in their encampment, according to Fox 9 News. The city’s five demands were: (1) Remove trash,
(2) Bring in street sweepers, (3) Photograph and remove graffiti, (4) Reopen Summit Avenue to traffic and (5) No new signs.

Officers, with gear on, pushing back here:

After police backed off, the protesters marched back down the street:

Protestors make way back to Gov residence after police back off #PhilandoCastile pic.twitter.com/m4QbUK4OLk