A screenshot of the surveillance video. You can see the gunman shooting the imam and his assistant on the sidewalk in the distance. (YouTube)

Surveillance video shows the moment a Queens, New York, imam and his assistant were shot on a sidewalk in broad daylight. Police are now questioning a person of interest in the case, Fox News said.

That man, Oscar Morel, 35, of Brooklyn, has been charged in the murders, although his alleged motive is still not clear, police say. You can learn more about Morel here.

Imam Maulama Akonjee, 55, and his assistant, Thara Uddin, 64, died at a hospital a short time later, CNN reports. Both men were shot in the back of the head. Warning, the video shows the moment the men were shot, although from afar:

The video shows the men walking down the sidewalk, when the shooter comes up behind them. The men fall over, and the shooter then flees in the direction he came from.

Police have said the two men were walking home after a prayer service at a nearby mosque when the man ran up and shot them. Both victims were described by those who knew them as well-liked pious men who had no obvious enemies. Akonjee’s life revolved around family and religion, friends said.

The gunman has not been identified or arrested, but police released this sketch:

At the scene of the shooting August 13, people were calling the double murder a hate crime and blaming the rhetoric of Republican nominee Donald Trump. However, the New York Police Department said the motive was not yet clear.

“There is nothing in the preliminary investigation that would indicate they were targeted because of their faith,” NYPD Deputy Inspector Henry Sautner told reporters. 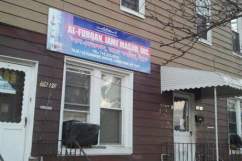 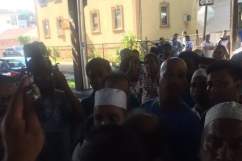 Loading more stories
wpDiscuz
5
0
Would love your thoughts, please comment.x
()
x
| Reply
Surveillance video shows the moment a New York imam and his assistant were shot and killed on a Queens street.