WPTV said Seddique Mateen was sitting behind Clinton at the rally in Florida, which occurred about 30 minutes from the Pulse nightclub’s location.

The Florida television station said that Clinton “was supposed to be talking jobs, but started the speech off paying tribute to those affected by the Pulse Nightclub shooting.”

Mateen’s son, Omar, massacred 49 people at a gay nightclub on June 12 in Orlando.

The station quoted Clinton as saying, “I know how many people, families, loved ones, and friends are still grieving, and we will be with you as you rebuild your lives.” Meanwhile, Mateen’s father could be seen sitting close behind the candidate as she spoke.

Mateen’s father told the TV station “we’ve been cooperating with the federal government” and that he supports Clinton for president, saying, “Hillary Clinton is good for United States versus Donald Trump, who has no solutions,” he said.

You can watch the full video of the rally here:

And you can watch the television reporters interview Mateen’s father here:

Some on Twitter questioned why Hillary Clinton’s advisers allowed Mateen’s father to be captured on camera sitting behind the candidate. 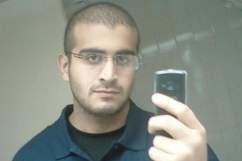