A 26-year-old man is accused of kidnapping and killing his friend’s 5-year-old daughter in Minnesota, police say.

Zachary “Zach” Anderson was taken into custody in the death of Alayna Jeanne Ertl, who was found dead Saturday. He has been charged with second-degree murder, first-degree criminal sexual conduct, and kidnapping.

Alayna disappeared from her family home in Watkins, Minnesota, a city of just under 1,000 people located in central Minnesota.

The little girl’s body was found in a residential park in Cass County, about 80 miles away from Watkins after an Amber Alert was issued for her on Saturday afternoon.

1. Anderson Worked With Alayna’s Father at a Utility Line Company & Was a Guest in Her Family’s Home

The horrific sequence of events started when Anderson, a family friend who worked with Alayna’s father, Matt, stayed overnight in the family’s home in Watkins, police said.

According to The Minneapolis Star-Tribune, both Matt Ertl and Anderson “are employed by Vannguard, a multistate company that locates underground utility lines.”

KARE quoted a family friend as saying that Anderson “just recently started hanging out with Matt Ertl, the father of the victim, because they play softball together.” KTSP said they had played softball that night.

Alayna’s mother, Kayla, put the child to bed at 2 a.m. Saturday. When the girl’s parents, Kayla and Matt Ertl, awoke at 8 a.m., they realized that both Anderson and the little girl were gone, according to the Amber Alert issued by police.

“Our suspect in this case is a family friend, co-worker of the victim’s father, and was staying the night up in Watkins last night,” Meeker County Sheriff Brian Cruze said Saturday night, according to Fox 9. “He had previously been to that residence and spent a night here and there — so he’s not a stranger and not new to the residence, but was just there for the night.”

By afternoon, an Amber Alert had been issued, and the search for the child and the family friend was on.

The Amber alert put out by the Meeker County Sheriff.

Some accounts said Anderson was from Coon Rapids, and some said he was from Monticello. The Amber Alert said he was 26-years-old, 200 pounds, and 5-foot 10 inches tall. Police later clarified that he is 25. Alayna weighed 45 pounds and was described as having short, sandy blond hair. 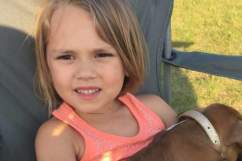 2. Anderson Took Matt Ertl’s Truck & a Cell Phone Inside it Was Used to Help Track Him, Authorities Say

Police say that Matt Ertl’s truck, a 2002 GMC Sierra, was also missing, but it was recovered near a cabin owned by Anderson’s family.

The Amber Alert says police pinged Matt Ertl’s cell phone in an attempt to find Anderson. The stolen vehicle was the work truck of Alayna’s father and also had his cell phone in it, said the St. Cloud Times.

WCTrib said the phone pinged in Todd County at 9 a.m. and was then turned off.

The child’s body was found in the southern portion of Wilderness Park Estates, “a residential park” located about 35 miles northwest of Brainerd, the West Central Tribune reports.

The medical examiner has ruled the child’s death the result of homicidal violence. KTSP says Alayna died from strangulation and “blunt force trauma to her head” and that her body was found in a swamp with a pink blanket sticking out. She was also sexually assaulted, said KTSP.

Sheriff’s deputies “found the stolen truck on property owned by Anderson’s family in rural Cass County,” and K-9 officers searching the property located Anderson there on Saturday afternoon,” according to the St. Cloud Times.

“Information provided by the suspect” and other “investigative efforts” “led officials to Alayna’s remains in a wooded, swampy area a few hundred yards from the Anderson family cabin,” a law enforcement statement said, the St. Cloud newspaper reports.

4. Anderson Has Only a Minor Record & Left a Suicide Note, Reports Say

My heart aches for the family of the Alayna Ertl. Fly high sweet baby girll? pic.twitter.com/vcU2IeJpvE

Law enforcement officials say there is nothing in Anderson’s background that seems “predatory.”

A check of online court records revealed only minor traffic issues, said the Minneapolis Star-Tribune, quoting the sheriff as saying, “We have no known predatory sexual offender information on him or anything like that. We are at a loss as to why this happened at this time.”

Zachary Anderson, charged in murder of Alayna Ertl, left suicide note and had fresh cuts on his wrist.

Alayna’s mother told KTSP the family called Alayna “little peanut” and said she was always smiling and hugging people. Alayna’s grandparents told the TV station the little girl loved to dress up and size the songs from the movie, Frozen.

KARE added that he has a burglary on his record from age 17. “He had three contacts with Wright County police in which he was accused of fighting or acting belligerent after drinking. No charges were filed in those cases,” said the Minnesota television station.

However, one woman who used to live near Anderson described disturbing encounters to Minnesota television. The station referred to him as “Zac.”

5. Friends & Family Posted Tributes to the Little Girl on Facebook

A GoFundMe account has been created for Alayna’s parents. It had already raised more than $14,000 in a little more than one day.

On social media, Alayna’s mother, Kayla, posted the photo of the child used in Amber Alert, and the comment thread was flooded with prayers and sorrow.

Friends and family posted photos of Alayna on Facebook with angel’s wings and with Jesus Christ, as well as other tributes.