The shooter, a 14-year-old freshman, died at the scene, KLST-TV reports.

A federal police officer was also accidentally shot during a “friendly fire” incident. He and the wounded student were taken to local hospitals and are both expected to survive, officials say.

The victim has been identified by her friends as Sedonah Young. She posted a video on Twitter with another on of her friends showing that she was OK after the shooting. Young was shot in the “lower extremities,” police say.

The school is located in the Big Bend area of west Texas near the Mexico border. The shooting is being investigated by the Brewster County Sheriff’s Office and Alpine Police.

The motive for the shooting is not known.

1. The Shooting Happened in the School’s Band Hall, the County Attorney Says

One person was killed in a shooting in the band hall of Alpine High School, according to Brewster County Attorney J. Steve Houston.

The shooting happened in the band hall of Alpine High School, County Attorney J. Steve Houston told CNN. Houston said one person was killed, but it wasn’t immediately clear if he was referencing the shooter.

The shooter was found dead of a self-inflicted gunshot wound in a bathroom, according to KLST-TV.

Police also found a semi-automatic pistol and ammunition near her, the news station reports.

Sheriff Ronnie Dodson said at a press conference that a deputy was near the school and entered immediately upon hearing a report of an active shooter.

The school was placed on “critical lockdown,” the San Antonio Express News reports.

Students were then moved to the Jehovah’s Witness church nearby, where parents were able to pick them up after the scene was secure, the Alpine Avalanche reports.

Police initially told CNN they are looking for two shooters, but later said it was a lone shooter. 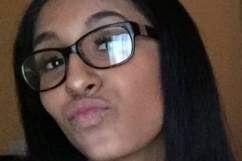 2. The Shooter’s Grandparents Say She Had Only Lived in Alpine for 6 Month

The name and other information about the shooter who died at the school have not yet been released by police.

Brewster County Sheriff Ronnie Dodson told KWES-TV he has spoken to the shooter’s grandparents. They told him she had moved to Alpine just six months ago.

The grandparents said the girl was a straight A student, and there were no indications of any problems, Dodson told the news station.

3. There Are About 280 Students at the High School

as a student of alpine high, I want to thank the law enforcement for their amazing effort to keep us safe.

About 280 students attend Alpine High School, according to the Alpine Independent School District.

Students returned to school on August 22.

“As we all wait for more information, please keep Alpine – Alpine’s kids – in your prayers this morning,” Texas State Representative Pete Gallego, who represents the area, said on Twitter.

“I am currently monitoring the active shooter situation in Alpine. I have directed my office to offer any measure of support needed to assist the law enforcement officials currently working this case,” Paxton said. “I wish to extend prayers and sympathy to any victims’ families and their loved ones who have been affected by this senseless act of violence.”

4. A Threat Was Also Made to a Local College

Sheriff Dodson said someone called them and said "y'all better leave me alone", made threats against @Sul_Ross. Authorities headed there now

The Brewster County Sheriff’s Office told Marfa Public Radio that a threat was also made to Sul Ross State University. A person called and said “y’all better leave me alone” and made threats against the college, the sheriff said.

Police had to send resources to the college to investigate the threat.

“That’s ridiculous for someone to call in something like this when we’ve got this situation going on,” Sheriff Ronny Dodson told the Associated Press. “This community does not expect this, we don’t want this, and we can’t explain it yet.”

The call came after the high school shooting. Sul Ross posted a message on it website and sent out a campus wide alert:

AN ACTIVE SHOOTER THREAT EXISTS FOR THE SUL ROSS STATE UNIVERSITY ALPINE CAMPUS. A CAMPUS-WIDE LOCKDOWN IS IN EFFECT IMMEDIATELY AND EVERYONE IS REQUESTED TO SHELTER IN PLACE. ADDITIONAL DETAILS WILL BE RELEASED WHEN AVAILABLE

The college had already been placed on lockdown as a result of the school shooting nearby.

Dodson said they don’t think the incidents are connected, calling the person who made the threats a “nut” and said they are focused on finding him, with help from the FBI. Dodson said the caller appears to have targeted Alpine because of the attention it received during the shooting.

Our Interim GM on scene at #Alpine elementary. Parents picking up kids. pic.twitter.com/OJQtdoQ2gs

Alpine is home to about 6,000 people. There are about 1,000 students in the school district, according to its website. The district includes students from communities surrounding Alpine, according to the website.

The two other schools in the Alpine Independent School District were also placed on lockdown as a precaution, Big Bend Now reports.

Loading more stories
wpDiscuz
8
0
Would love your thoughts, please comment.x
()
x
| Reply
A female student wounded a classmate before killing herself in a shooting at Alpine High School in Texas, police say. A federal agent was accidentally shot by another officer while responding to the school.