Kody Lott, left is accused in the murder of Lauren Landavazo, a 13-year-old Wichita Falls, Texas, girl who was shot while walking home from school with her friend, 13-year-old Makayla Smith, who was seriously wounded in the shooting, police say. (Facebook)

A 20-year-old man says the devil told him to shoot two 13-year-old girls as they walked home from school in a quiet Texas neighborhood, killing one of the girls, police said in court documents obtained by the Times Record News.

Kody Lott, 20, is accused in the shootings of Lauren Landavazo, who died at the scene, and Makayla Smith, KAUZ-TV reports. They were shot Friday as they walked home from school in Wichita Falls.

Lott was arrested Sunday. He is being held on $4 million bail on murder and aggravated assault charges, the Times Record News reports. Lott was taken into custody at a shopping center after police went to his apartment complex to arrest him, according to the newspaper.

Police say Lott confessed to the shooting. His father told KAUZ-TV his son has mental health issues and has been diagnosed with bipolar disorder and paranoid schizophrenia.

1. Lott Told Police He Was Angry He Didn’t Have a Girlfriend & Planned the Shooting by Talking to the Devil

Kody Lott told police he was angry because he doesn’t have a girlfriend, and planned the shooting by talking to the devil, the Times Record News reports.

Lott told police, “he planned the events and was upset that the local media called the incident ‘senseless.’ Kody stated the incident wasn’t senseless because he planned and thought it out after talking to the devil about it”

You can read the full court document below:

Wichita Falls Police say the gunman opened fire from inside a pickup truck about 3:30 p.m. Friday in an alley on Kingston Drive, near the school where Laura Landavazo and her friend, Makayla Smith, were walking home from, the Times Record News reports.

He used an “AR-style rifle,” that was owned by his father, police said. Several witnesses, including other students walking home from school, were in the area, according to police.

Police said they found 15 spent shell casings at the seen. Landavazo was shot 14 times, according to police.

Two Teens Shot in Wichita Falls While Walking Home From SchoolIf you're new, Subscribe! → bit.ly/NewsTalkSubscribe UPDATE: SUSPECT IN SHOOTING ARRESTED, GIVES POLICE CONFESSION AND POSSIBLE MOTIVE: newstalk1290.com/wichita-falls-shooting-arrest/ Wichita Falls police responded to the scene of a shooting on Kingston that left two females hospitalized. The suspect is still on the loose and is described as a white male with bushy brown hair driving a…2016-09-02T21:46:45.000Z

The shooting caused panic in the normal quiet residential neighborhood in the southwest part of the city.

“We’re going to work this until this is resolved,” Wichita Falls Police Chief Manuel Borrego told reporters on Friday, prior to Lott’s arrest. “It’s very tragic and heartbreaking that this involved two young people.”

More shots were heard about 5 p.m., but police have not confirmed if they were connected, the Times Record News reports. Two people were detained in that incident.

Smith was listed in stable condition on Sunday.

Police located Lott after finding the truck witnesses saw during the shooting.

According to Wichita Falls CrimeStoppers, police were searching for an “early 2000 model GMC or Chevrolet champagne/gold colored SUV that was seen in the area.”

BREAKING: Police have a subject in custody. Waiting on details. Description of vehicle matches that of Fri shooter pic.twitter.com/V9T9OJJStI

Reporters said that SUV was located on Sunday. Lott also had photos on his Facebook page of a similar truck.

Police also served a search warrant at the Fountaingate Apartments, with several armed officers at the scene for most of the afternoon.

The apartment complex is close to the scene of the shooting, and is where Lott lives.

“This affected our whole community, so it was with much gratitude that our citizens got involved with us,” Borrego told reporters. “Also, I have to give a lot of credit to the long hours put in by our detectives. We weren’t going to end until we got this thing solved.” 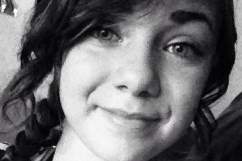 2. Lott’s Ex-Girlfriend Says He Once Wrapped a Seatbelt Around Her Throat & Pushed Her Down the Stairs

Lott’s ex-girlfriend, Hailee Clayton, told KAUZ-TV that he was abusive during their 2-year relationship. She said he also harassed her after the relationship ended.

“I had a seatbelt wrapped around my throat, he pushed me down the stairs and busted my head on the dash of his car. It was just a really abusive relationship,” Clayton told the news station. “The entire second year of our relationship he was very abusive.”

She says they met while they were both students at Archer City High School in 2010, and dated until 2012. Clayton, who is now engaged and has a young child, says he has threatened her life in recent years.

“He said he was going to catch us out and about and make us wreck our vehicles and kill us and torture us,” Clayton told KAUZ.

Clayton said Lott texted her fiance Friday morning, the day of the shootings.

“He was saying he wanted to kidnap all three of us and torture my son and I in front of him and make him watch,” Clayton said. “His entire life he wanted to hurt people. His life goal was to hurt people because he was sad or mad, whatever.”

Lott was also involved in a standoff in rural Baylor County, Texas, in June 2015, according to the Times Record News. He was not charged in the June 10, 2015, incident.

Police responded to Lott’s grandmother’s home on a report that he was threatening to “shoot folks,” the newspaper reported. The local sheriff said he had dealt with Lott in the past, negotiators talked him out of the house without any shots fired. He was taken to the hospital after the incident and issued a criminal trespass warning, police said.

“I knew he had mental problems, but I was in the process of trying to get it resolved. He was on medication,” he told the news station, adding the younger Lott was diagnosed with paranoid schizophrenia and bipolar disorder.

3. Lott’s Facebook Page Is Filled With References to the ‘Illuminati’ & Conspiracy Theories, Including a Post About Mass Shooters

Lott’s Facebook page is filled with references to the “Illuminati” and other conspiracy theories. The “Illuminati” theory is that a shadowy group of elites control every aspect of the world.

In one of the posts, Lott shared a conspiracy theory about mass shooters being controlled by prescription drugs:

He also has several posts about marijuana. He was arrested in August 2014 on marijuana charges and in May 2014 for theft of between $20,000 to $100,000. The outcomes of those cases were not immediately available.

4. Police Refuted Rumors the Shooting Had Been Committed by White Supremacists, but Haven’t Released a Motive

Police issued a statement Sunday to refute rumors that had spread online about the shooting being racially motivated. At least one website said the gunman was a white supremacist who was upset because Landavazo was friends with a black girl. The other victim is black.

“There has been a recent report show up on social media and other websites that makes references to the shooting. The statement claims that it was committed by a white supremacist who targeted the victims due to their race and friendship,” police said. “The WFPD wants to strongly refute that claim. There has been no evidence found to indicate such a motive.”

5. Lauren Was a Student at a Nearby Middle School & the Community Has Rallied Around Her Family

Landavazo was a student at McNeil Middle School in Wichita Falls, according to the school district. Superintendent Michael Kuhrt issued a statement about the shooting:

Today after school there was a tragic off-campus situation involving two girls from McNiel Middle School. I am saddened to report that one of those girls passed away and the other is in guarded condition. Please know that the district is coordinating efforts to provide grief counselors for students. As soon as we have more information about those resources, we will pass that along to you. As a district, we are saddened by this senseless act of violence and our thoughts and prayers are with all of those involved.

Landavazo was remembered by the brother of the other victim, Tre’vion Elliott as being his sister’s best friend.

“They were always talking, whether through text message or Snapchat,” Elliott told the Times Record News. “From what I was told, they always walk home together. They walk to school together since they live in the same neighborhood, and they walk home together also.”

Among them was the Wichita Falls Sam’s Club.

“This isn’t about Sam’s. It’s about the associates that gave their time to come out here and cook. Because there was a tragedy here in Wichita Falls, and it’s about the people that came together because of the tragedy,” assistant manager Bryan Givens told KAUZ-TV.

A vigil was being planned for Sunday to remember Lauren Landavazo and pray for Makayla Smith, KAUZ-TV reports.

It was to be held at 8 p.m. outside of McNeil Middle School.

Dozens of flowers and teddy bears were left at the scene of the shooting.

“I think it touches everybody, because it could have been anybody. To think that our kids can’t walk around in the neighborhood or in their yard from school, it’s crazy,” Emmanuel Carrillo told the Times Record News. 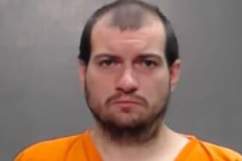 Read More
5 Fast Facts, Breaking News, Crime, Police, Texas
A 20-year-old Texas man says he shot at two 13-year-old girls, killing one, as they walked home from school because the devil told him to do it, police say.