LIVE from #debatenight: Trump says he's not discussing the importance of his income in a 'braggadocious' way. https://t.co/og9OLZUHOY pic.twitter.com/UOBMsUxQZ9

During the debate, Donald Trump said that he wasn’t talking about his wealth in a “braggadocious” way. Amazingly, the word had been used to describe the way Trump talks about his wealth before. Ted Cruz said it in May, on the day of the Indiana Republican primary. Trump himself has used the word in the past.

“I am very underleveraged,” Trump said. “I have a great company. I have a tremendous income. And the reason I say that is not in a braggadocios way. It’s because it’s about time that this country had somebody running it that has an idea about money.”

The word “braggadocious” is real. According to Dictionary.com, the word is an adjective for “boastful” or “overly proud.”

As The Guardian reported in May, Cruz called Trump a “braggadocious, arrogant buffoon” and an “amoral pathological liar” just before the Indiana Republican primary.

Cruz has endorsed Trump, although he famously declined to do so at the Republican National Convention over the summer.

Trump also used the word in a September debate with the other Republican presidential candidate in September.

“I’m Donald Trump. I wrote the art of the deal. I say not in a braggadocious way. I’ve made billions and billions of dollars,” Trump said at the time. 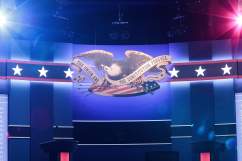