Julian Assange founded WikiLeaks in 2006, The Washington Post reported, and the site gained popularity by releasing thousands of State and Defense Department documents leaked by Chelsea Manning. Manning is currently in prison, serving a 35-year sentence, according to The Washington Post.

The site is back in the spotlight, and has stayed there throughout the 2016 U.S. Presidential Election due to the release of hacked emails from Hillary Clinton’s campaign.

11/09/2016: Supposedly, Assange wrote and published a statement via WikiLeaks on the U.S. election, but no word yet confirming that the piece was written by him.

1. Ecuador shut off his internet connection 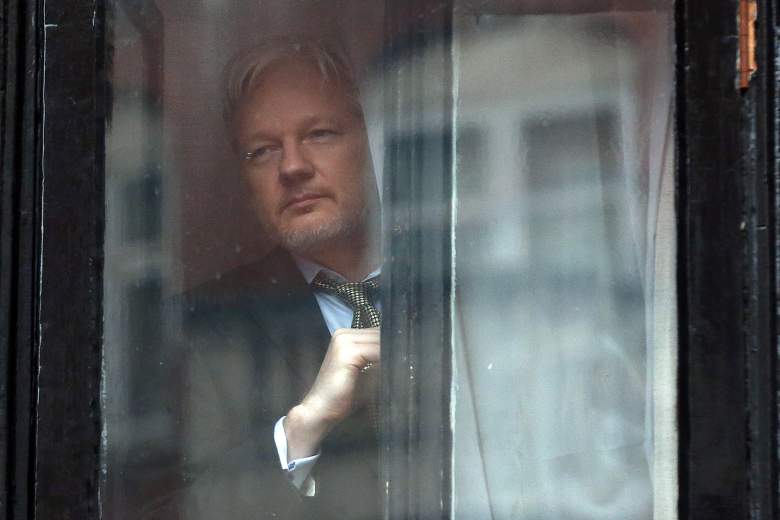 Wikileaks founder Julian Assange prepares to speak from the balcony of the Ecuadorian embassy in London. Ecuador confirmed on October 18 that they purposefully cut Assanges internet connection off, but say Assange isn’t being evicted from the embassy. (Getty)

Ecuador confirmed on October 18 that they purposefully cut off Assange’s internet connection at the Ecuadorian Embassy in London. The country clarified that Assange isn’t being kicked out of the embassy, and a “temporary restriction” of internet to Assange “does not prevent the Wikileaks organization from carrying out its journalistic activities,” reported The New York Times.

The New York Times pointed out that the restriction of internet access was clearly a preventative measure. Ecuador doesn’t want to be sucked into Assange’s political leaking, and wants to avoid becoming a control center. Ecuador even released a statement saying that it “does not interfere in the electoral processes in support of any candidate in particular,” reported The New York Times.

This has been the first sign that Ecuador is wondering whether Assange has overstayed his welcome at the embassy.

2. He’s Missing, and People are Demanding “Proof of Life” 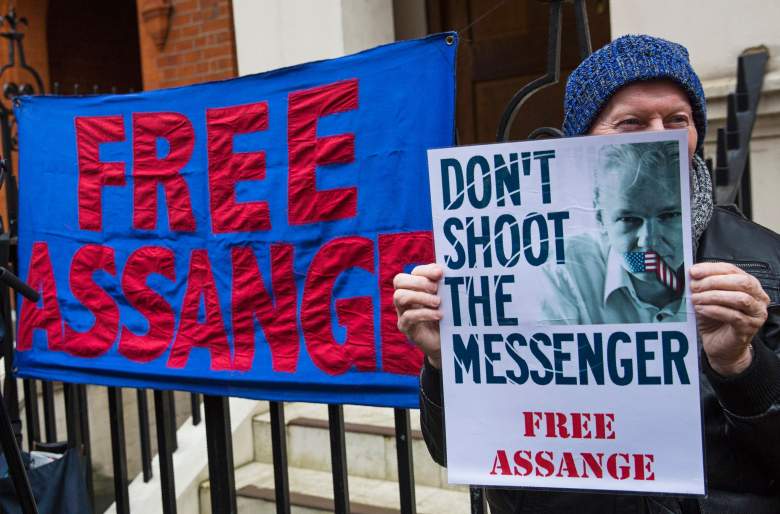 Assange has been missing since Ecuador shut off his internet connection, and no proof of life has been released. Many fake proof of life tweets circulated with photoshopped photos of Assange, but have been debunked. With his internet blackout, some are even wondering if Assange is still at the embassy at all, with a conspiracy theory thread noting that an aircraft left the UK and landed in West Virginia around the time of the internet outage at the Ecuadorian embassy.

Most recently, WikiLeaks tweeted a poll for those who wanted proof of life, asking what mode of communication people preferred. Video won. Since that tweet, a video surfaced wherein viewers can hear Assange’s voice, but he isn’t actually onscreen. It’s being claimed as proof of life, but many are arguing that without a visual of Assange it doesn’t count.

A website called Assange.net is also watching for proof of life, and has a live timer counting from the last time anyone saw proof of life. As of the time of publication, the clock was set at 28 days and 16 hours. This was after the video of Assange’s offscreen voice surfaced.

Update 11/09/2016: Assange.net has ceased with the countdown clock and currently shows only a poem titled “Death’s Valley” under the date. It is as follows:

“NAY, do not dream, designer dark,
Thou hast portray’d or hit thy theme entire:
I, hoverer of late by this dark valley, by its confines, having glimpses of it,
Here enter lists with thee, claiming my right to make a symbol too.
For I have seen many wounded soldiers die,
After dread suffering—have seen their lives pass off with smiles;
And I have watch’d the death-hours of the old; and seen the infant die;
The rich, with all his nurses and his doctors;
And then the poor, in meagreness and poverty;
And I myself for long, O Death, have breathed my every breath
Amid the nearness and the silent thought of thee.
And out of these and thee,
I make a scene, a song, brief (not fear of thee,
Nor gloom’s ravines, nor bleak, nor dark—for I do not fear thee,
Nor celebrate the struggle, or contortion, or hard-tied knot),
Of the broad blessed light and perfect air, with meadows, rippling tides, and trees
and flowers and grass,
And the low hum of living breeze—and in the midst God’s beautiful eternal right
hand,
Thee, holiest minister of Heaven—thee, envoy, usherer, guide at last of all,
Rich, florid, loosener of the stricture-knot call’d life,
Sweet, peaceful, welcome Death.”

3. He’s been in London’s Ecuadorian Embassy since 2012 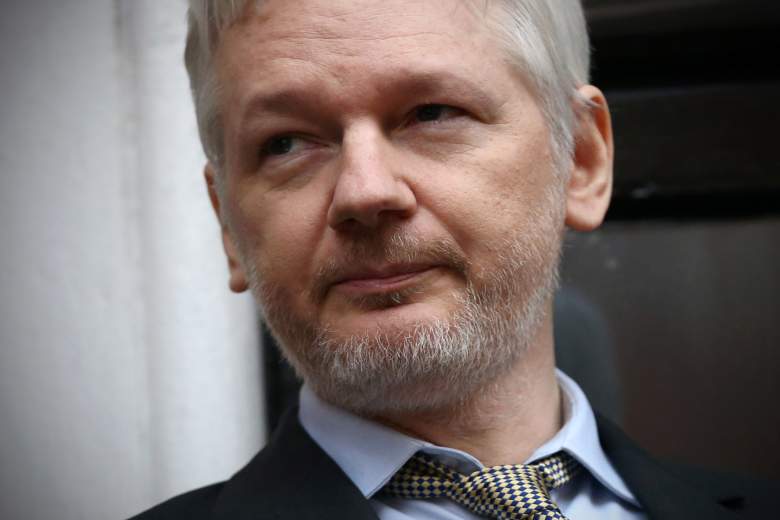 Wikileaks founder Julian Assange speaks from the balcony of the Ecuadorian embassy where he continues to seek asylum following an extradition request from Sweden in 2012. The United Nations Working Group on Arbitrary Detention has insisted that Assange’s detention should be brought to an end. (Getty)

According to The Washington Post, Assange took up residence in London’s Ecuadorian Embassy in 2012. He chooses to stay due to fear of extradition over the Manning leaks in the U.S. and due to a rape allegation against him in Sweden.

As of the time of publication, Ecuador has insisted that Assange is still welcome in the embassy. On October 18, all press questions were directed to the embassy’s website, where a statement said “In view of recent speculations, the government of Ecuador reaffirms the validity of the asylum granted four years ago to Julian Assange,” The New York Times reported.

4. Some say Assange and WikiLeaks are Overtly Supporting Trump 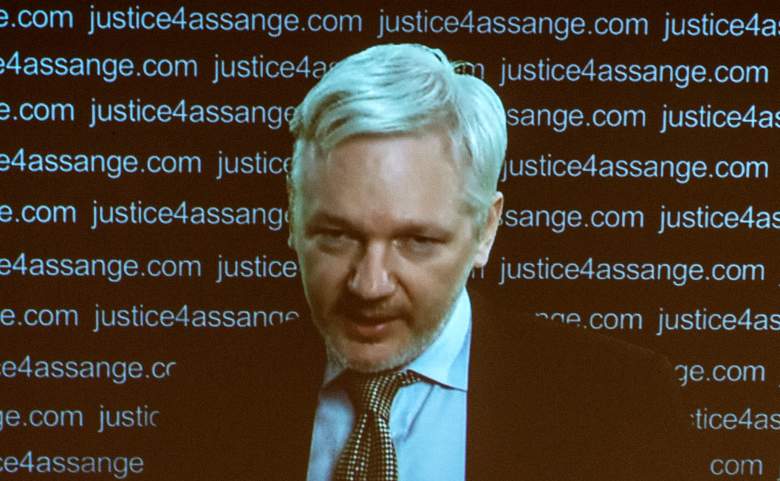 WikiLeaks founder Julian Assange speaks at a press conference at the Frontline Club via video link from the Ecuadorian Embassy in London. Assange has been accused by some of aiding the Trump campaign by bringing thousands of Clinton campaign emails to light. (Getty)

A national spokesperson for Hillary Clinton, Glen Caplin, has actually attacked Assange on Twitter with an 18 tweet series railing WikiLeaks and Assange. WikiLeaks is continuing to publish thousands of emails from Clinton camapign chairman John Podesta, and Caplin has said that the release of the emails show that WikiLeaks would rather play a political game than encourage true transparency.

Are we supposed to believe Russia has no intel on Trump? Why won’t @wikileaks publish it? Because Trump & Assange are #Putinspuppets. (8/18)

The New York Times actually wrote an article suggesting that Assange was doing the Russian government’s bidding, though Assange has referred to it as a “conspiracy theory.” The NYT article was also referenced by Caplin in his Twitter storm.

ABC has also suggested that Donald Trump’s last chance at the polls may be WikiLeaks. With Assange constantly leaking emails from the Clinton campaign, Trump stands to benefit from the leaks. With this in mind, ABC suggests that Assange seems to be throwing his support to Donald Trump.

5. He’s Facing Sexual Assault and Rape Charges in Sweden, but the Statute of Limitations is Approaching 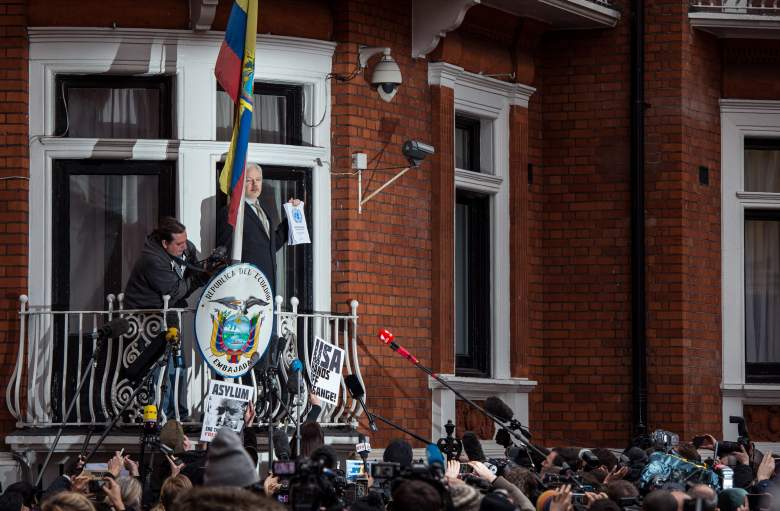 Wikileaks founder Julian Assange speaks from the balcony of the Ecuadorian embassy in London, England. A UN panel ruled he was being unlawfully detained at the Ecuadorian Embassy, but allegations against him in Sweden continue to be an issue, with the UK saying they will ccontest the UN ruling. (Getty)

Julian Assange faces allegations from two women dating back to August 2010. On August 20, 2010, Swedish authorities issued an arrest warrant for Assange on one count of rape and one of molestation, but the warrant was withdrawn a day later, The BBC reported.

Sweden continued investigating the molestation allegation, and in 2010 the rape investigation was re-opened, leading to the Swedish court approving a request to detain Assange for questioning for unlawful coercion, sexual molestation, and rape, according to The BBC. An international arrest warrant was issued, The BBC reported, but Assange says the allegations are bogus and part of a smear campaign against him.

These allegations, along with fear of being sent back to the U.S. by Sweden only to face the death penalty, are what sent Assange to the Ecuadorian embassy in London in 2012. Sweden says they cannot legally guarantee that Assange wouldn’t end up extradited to the U.S., but Swedish Foreign Minister Carl Bildt has said that his country wouldn’t extradite someone to a country where they would face the death penalty, according to The BBC.

Since 2012, Sweden has been forced to drop two allegations — sexual coercion and molestation — because the Statute of Limitations has run out. However, the rape charge remains valid until 2020, the BBC reported.

Earlier this year, the BBC reported that the UN ruled that Assange should be allowed to walk free and should be compensated for “deprivation of liberty,” according to the BBC. The UK Foreign Office, however, says the ruling “changes nothing” and plans to contest it. 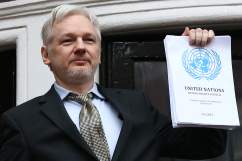 Loading more stories
wpDiscuz
0
0
Would love your thoughts, please comment.x
()
x
| Reply
Julian Assange has been missing since the DDoS attack in late October. Who is he? Where is he? Why is he missing?