Donald Trump supporters are being encouraged to yell “Bill Clinton is a rapist” at Democratic presidential rallies for Hillary Clinton. A rally in Las Vegas, Nevada hosted by VP pick Tim Kaine was a recent target.

The latest event occurred less than 2 days after a heckler shouted the accusation at Bill Clinton himself in in Canton, Ohio.

Clinton, who served as United States president from 1993 to 2001, handled the aggressive heckling without losing his cool.

A recent rally hosted by Clinton herself in Haverford, Pennsylvania also addressed Trump’s history with women when she took a question from a 15-year-old girl in the audience.

The girl asked, “At my school, body image is a really big issue for girls my age. I see with my own eyes the damage Donald Trump does when he talks about women and how they look. As the first female president, how would you undo some of that damage and help girls understand that they are so much more than what they look like?”

It was later revealed that the girl was a local child actor and the daughter of Democratic state senator, Daylin Leach. The New York times reports that he later admitted to helping his daughter write the question.

The above video ends with the woman filming the agitator turning the camera on herself and saying, “Well, Bill Clinton is a rapist.” 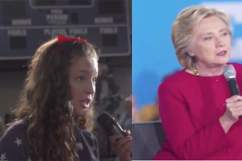