“I Voted!” stickers sit atop a ballot box at the Denver Elections Division Building in Denver, Colorado on Nov. 4, 2014. It was the final day that voters could cast and drop off a ballot in a mainly mail-in ballot election year in Colorado. (Getty)

Early voting is underway in Colorado, where registered Democrats are turning out in higher numbers than Republicans or other groups. The Secretary of State’s office reports, as of Thursday, Oct. 27, 572,550 voters have cast ballots — 224,914 are Democrats and 196,082 are Republicans. Unaffiliated voters make up 143,866 votes.

Ballot drop-off locations in Colorado can be found by entering an address here.

The high Democratic turnout is better than the 2014 midterm election, according to the Denver Post, which was Colorado’s first shot at all mail-in ballots. This year is different, however, because it’s the first time a presidential election is being held with this system in place. The Post also has a tool tracking ballot return data.

In 2012, Republicans turned out in higher numbers early on, but President Barack Obama ultimately ended up winning the battleground state in his re-election bid over Mitt Romney.

“Clearly, there is a comparative engagement factor,” Rick Ridder, a prominent Democratic strategist in Colorado, told the Post. “Whether it’s bigger or better than 2012 or 2014 is irrelevant. What’s important is the ratio between Democrats and Republicans.”

In a four-way race that includes Libertarian presidential nominee Gary Johnson and Green Party candidate Jill Stein, Hillary Clinton is leading Donald Trump by an average of 6.2 points. Clinton has led in every major Colorado poll since the beginning of October, except for one where the two major party candidates were tied. 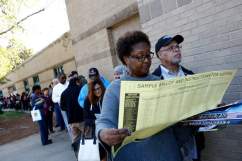 Read More
2016 Presidential Election, Donald Trump, Early Voting Results 2016, Hillary Clinton, Politics
Discuss on Facebook
Early voting in Colorado is underway and the all mail-in ballot system is now tallying returns. Find out how many Democrats and Republicans are voting.