Tonight, ABC News 20/20 will examine Kimberly Long and the death of her boyfriend, Ozzy Conde. After serving nearly seven years in state prison for Conde’s murder, Long’s conviction was overturned with the help of the California Innocence Project. Tonight, 20/20 will investigate the details of the murder, and Long’s two trials, in an attempt to decipher whether or not she is guilty of her boyfriend’s death.

Read on for more details.

1. She Got in a Fight With Conde the Night He Was Killed

On the night of October 5, 2003, after spending the day bar-hopping, Kimberly Long, her boyfriend Ozzy Conde, and the couples’ friend, Jeff Dill, returned home. Long and Conde got in a fight– Press Enterprise reports Long as saying, “He was trying to pull me inside the house, and I didn’t want to go.” Long then left with Dills.

In her testimony, Long admits that she says hurtful things to Conde that evening, and even hit him with a motorcycle helmet before Dills pulled her away.

2. She Admits to Having Sexual Intercourse With Dill That Night

After her fight with Conde, Long went back to Dill’s home, where the two engaged in sexual intercourse. She admits to “telling her lover that she wanted to hurt Conde.”

Long claims that when Dill dropped her back home around 2 am, she found Conde barely conscious on the couch, lying in a pool of blood.

3. She Was an Emergency-Room Nurse at the Time of Conde’s Murder

Exclusive: Kim Long speaks out after murder sentence overturned – Crime Watch DailyKimberly Long, a nurse and single mom, has steadfastly proclaimed she did not brutally bludgeon her boyfriend Ozzy Conde to death in 2003. Her conviction was recently overturned and she's now telling her story to Crime Watch Daily.2016-09-20T21:48:50.000Z

Long was an emergency-room nurse at Corona Regional Medical Center at the time of Conde’s death, and the fact that she was medically trained was brought up by the prosecution many times during her trial.

Prosecutor Gerald Fineman has asked Long why she didn’t use her nursing skills to help her boyfriend– especially since she believed he was still breathing when she returned home. Long says, “I freaked out, and I panicked. It was horrible. I knew it was bad. . . . I couldn’t help him.”

4. There Were No Traces of Blood on Her Body

When Long returned home, she “saw a big blood stain on the couch. [She] saw [Conde], and… realized that something was wrong”, writes the CV Independent. Conde had been hit 3 to 8 times in the head with what the California Innocence Project says was a “long object”. Long has testified that at first, she thought Conde may have gotten into a fight.

The California Innocence Project writes, “When officers arrived, they noticed blood on every wall of the living room in a 360 degree radius, yet no blood was found on Kim or her clothing.” Furthermore, the drains inside and outside the house were not wet, indicating that no cleanup or washing-up had taken place. The organization has noted that in Kim’s trial, the prosecution made the argument that after killing her boyfriend, Kim disposed of her bloody clothing before calling the cops, and the jury believed him.

The California Innocence Project claims that they have verified Kim didn’t change her clothes, and the prosecution knew this at the time, they though argued that she did. They have also said the jury and the judge were unaware of this fact.

5. A Judge Threw out Her Murder Conviction in June 2016

2015: Kimberly Long Story by CBSCBS's Randy Paige put this story together on the Kimberly Long case in 2015. Since, Kim's conviction has been reversed and she has been released. More on her case here: https://californiainnocenceproject.org/read-their-stories/kimberly-long/2016-06-11T17:34:02.000Z

In June, a Riverside Judge overturned Long’s murder conviction and ordered a new trial. She was released on a $50,000 bail and the Riverside County District Attorney’s Office is currently appealing that decision.

Long served nearly seven years in state prison for Conde’s death. After the judge threw out the conviction and ordered a new trial, Long’s mother, Darlene, told ABC7, “She is getting freedom, and that’s what we’ve been waiting for for 13 years. Now everybody knows that our daughter has always been innocent of this hideous crime.”

Long’s mother added on, “We are sincerely hopeful that the district attorney will agree to put this case to bed and to move on.Because that’s justice.” 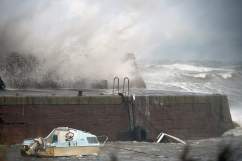 Hurricane Matthew: Where Does It Rank Amongst the Strongest Hurricanes?

Read More
ABC News, Crime
Kimberly Long spent seven years in prison for the murder of her boyfriend, Ozzy Conde. Her conviction was recently overturned by a judge. Learn more about Long here.