A lawyer for the New York Times on Thursday sent a formal reply to the Donald Trump campaign, which the previous day had threatened a lawsuit over a Times story quoting two women who said that Trump had groped them in a sexual manner in unsolicited fashion and without their consent.

The reply is openly defiant of Trump’s threat, and says that while libel lawsuits depend on plaintiffs proving that their reputations have been damaged, Trump himself has damaged his own reputation with his repeated boasts of his own “non-consensual sexual touching of women.”

Read the original New York Times story at this link.

The letter concludes with what appears to be the Times daring Trump to sue the paper, as he threatened.

“If Mr. Trump … believes that American citizens had no right to hear what these women had to say an that the law of the country forces us and those who would dare to criticize him to stand silent or be punished, we welcome the opportunity to have a court set him straight,” McCraw says in the letter.

JUST IN: Donald Trump defends himself against allegations of groping women: "These claims are all fabricated." https://t.co/CPP6Qa3SrQ pic.twitter.com/91W6KehM4E

Trump has contended that the claims in the New York Times story, are “fabricated,” an assertion he repeated at a rally in West Palm Beach, Florida, on Thursday as seen in the video above.

Here is the letter sent to Times editor Dean Basquet from Kasowitz on Wednesday.

Here it is: Trump campaign lawyer sends letter to @nytimes demanding "full and immediate retraction and apology" of article==> pic.twitter.com/yQpk5lgGOB

While Trump has a long history of attempting to intimidate critics with lawsuits and threats of suits, as documented in the Washington Post article at this link.

Legal experts say that pursuing a lawsuit against the Times could be fraught with danger for Trump, because he would likely be compelled to testify under oath about the sexual misconduct allegations, and in a civil case he would not have Fifth Amendment protections available to him. 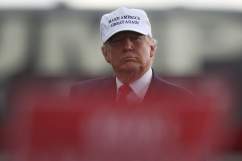 New York Times sent a response to Donald Trump daring him to sue over its story that he groped two women.