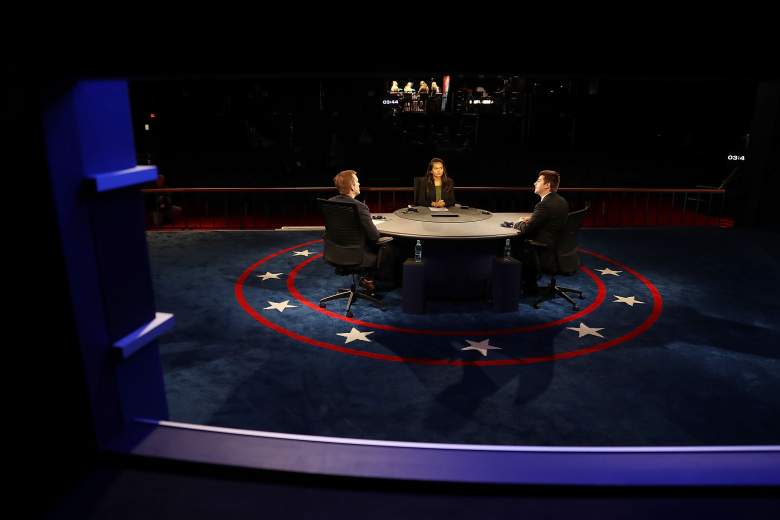 Longwood University students act as stand-ins during a rehearsal on the set for the vice presidential debate. (Getty)

Vice presidential nominees Mike Pence and Tim Kaine will go head-to-head on Tuesday, October 4th, being asked questions about the country’s future. But where exactly do these questions come from? Who writes them?

All four of the presidential debates are run by the non-partisan Commission on Presidential Debates. This group, however, does not see any of the questions beforehand. Instead, the questions are written by the debate moderators themselves, and everything that will be talked about during the debate is completely up to them.

“As always, the moderators alone will select the questions to be asked, which are not known to the CPD or to the candidates,” the Commission on Presidential Debates says on its website.

In this case, that moderator is CBS News’ Elaine Quijano. She has been working as a journalist since 1994 and for several years was CNN’s White House correspondent in the George W. Bush administration. Her reporting is usually rather objective, and she has not expressed any sort of partisan take on the election on social media or in her segments. In fact, Quijano completely disappeared from social media once her name was announced for the debate, seemingly wanting to avoid potentially seeming biased.

That’s an important point to stress because heading into the debate, Donald Trump has told his supporters that these events are rigged and that the moderators are out to get his campaign. Even though he said immediately after the first presidential debate that Lester Holt did a “great job,” he went on to spend the following week complaining about Holt’s moderation and the fact that he was fact-checked on some of his false statements while Hillary Clinton was not.

A few months ago, Quijano did a piece for CBS in which she interviewed Latinos who support Donald Trump, contradicting the idea that all minority voters dislike the Republican candidate.

The moderators of the second and third presidential debates will be Martha Raddatz, Anderson Cooper and Chris Wallace. Once again, these journalists will be the ones responsible for selecting questions, although some questions from voters will be taken at the second debate, which is a town hall.

Loading more stories
wpDiscuz
2
0
Would love your thoughts, please comment.x
()
x
| Reply
Vice presidential nominees Mike Pence and Tim Kaine will go head-to-head on Tuesday, October 4th. Who comes up with the questions for the debate?