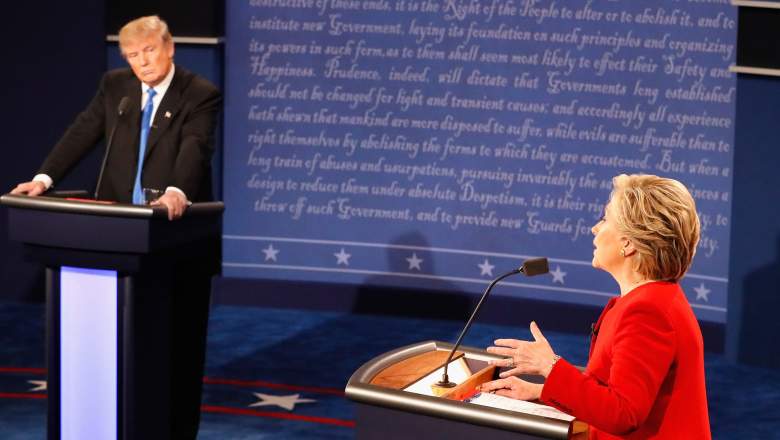 Hillary Clinton and Donald Trump are about to go head-to-head for the second time. The presidential debate will take place on October 9th at Washington University in St. Louis. What’s the format this time around?

The second debate’s format will be drastically different both from the first debate and from the vice presidential debate, as this one will take the form of a town hall, according to the Commission on Presidential Debates. This means that Clinton and Trump will be surrounded by uncommitted voters who have the opportunity to ask the candidates questions. Both nominees will have two minutes to respond to the question posed, and an additional minute will be devoted to followups from the moderator or to any other additional conversation.

Those undecided voters’ questions will make up about half of the debate. The other half will consist of questions posed by the two moderators, CNN’s Anderson Cooper and ABC’s Martha Raddatz. The questions are written by Cooper and Raddatz alone, with the Commission on Presidential Debates not seeing them beforehand. Once again, candidates have two minutes to respond, and there will be another minute for Cooper and Raddatz to follow up.

Although Hillary Clinton, who’s no newbie when it comes to presidential campaigns, knows the ins and outs of a town hall, this format is a bit unfamiliar to Donald Trump. The Republican candidate is more used to rallies and one-on-one interviews, and though he has occasionally held Q&A sessions, in all of these cases Trump was interacting with people who already supported him. Never has he been in a situation like Sunday’s, during which he will be confronted by those with legitimate concerns about his campaign that he must address while speaking to them face to face. The fact that the campaign is currently in crisis mode as prominent Republicans pull their endorsements won’t help, either.

On Thursday, a few days ahead of the debate, Trump actually held a town hall event in New Hampshire seemingly as practice for the debate; he even brought a timer so he could keep his responses to two minutes. But every question was a softball from those who have been on the Trump train for months, and he ended up leaving after only about a half hour. Needless to say, the real debate will not be like that.

But it’s not just Trump who has the possibility of making a gaffe in this town hall format. Many candidates have made some seriously awkward mistakes during this debate over the years, as when Al Gore famously invaded the personal space of George W. Bush and Bush simply nodded towards him. Then there was the 1992 debate between George H.W. Bush and Bill Clinton, during which Bush awkwardly looked at his watch while a voter was asking a serious question about the economy.

You’ll have plenty of ways to watch the second presidential debate, as it will air on all major networks including CNN, MSNBC, Fox News, CBS, ABC, Fox and C-SPAN. It will also be streaming live on the internet. The third and final debate takes place on October 19th at the University of Nevada, Las Vegas. The format will be the same as the first debate.

Loading more stories
wpDiscuz
6
0
Would love your thoughts, please comment.x
()
x
| Reply
Hillary Clinton and Donald Trump are about to go head-to-head for the second time. What's the format of their debate at Washington University in St. Louis?