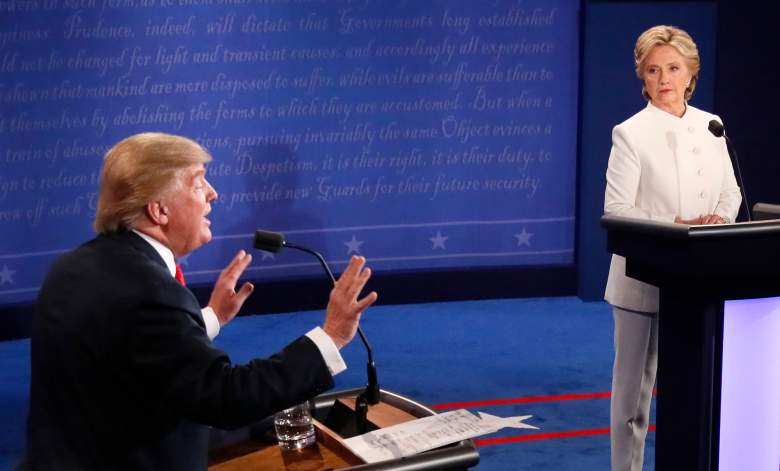 Hillary Clinton’s lead over Donald Trump appears to be narrowing according to most recent polls and major election forecasts.

The emails were discovered in a search of devices used by former New York congressman Anthony Weiner, who is separated from longtime Clinton aide Huma Abedin.

The uncertainty of what the new FBI review will discover, and when it will be completed, leaves much uncertainty surrounding how much of an impact it will have on the presidential campaign.

Most major election forecasts show it helped Trump gain a few points, however Clinton still holds a healthy lead. Although Clinton’s likelihood of winning decreased slightly, forecasts are showing it isn’t enough to alter the trajectory of the race.

“Unless the FBI closes this new investigation one way or the other next week, the likely impact will be to cut into Clinton’s margin, with the bigger effect being on down-ballot races than on the outcome of the presidential election,” said Patrick Murray, director of the Monmouth University Polling Institute, in an emailed statement to USA Today.

As FiveThirtyEight’s Nate Silver wrote, Comey’s announcement is probably not the “game changer” it was billed on Friday, however, as polls suggest, it has cut into Clinton’s lead. Silver also pointed out, it’s difficult to say how much of that shift is a reaction to Comey, or a race that had been tightening already. In other words, Trump is closing the gap with Clinton, but it may not necessarily because of the new email probe.

Either way, Trump looks to mount what would be a historic comeback, as forecasts still show him trailing nationally and in key battleground states.

As the Associated Press reports, tens of millions of voters had already cast ballots before the FBI news broke on Friday. Strong early-voting turnout by registered Democrats shows Clinton has the advantage in critical battleground states, as well as signs of strength in traditionally Republican states. That will make it more difficult for Trump’s campaign to benefit from the email probe.

Here’s a look at the latest forecast trends:

The New York Times’ Upshot elections model indicates Clinton’s lead has dropped from 8.6 percentage points to 7.6 in the past week. However, Trump still has a a challenging path to the White House.

Based on the latest state and national polls, Upshot gives Clinton a solid 88 percent chance of winning the presidency compared to Trump’s 12 percent.

To put it in sports terms, Upshot states Clinton’s chance of losing is about the same as the probability that an NFL kicker misses a 35-yard field goal.

Upshot shows Clinton has held a significant lead over Trump for weeks.

Over the past several weeks, Nate Silver’s FiveThirtyEight forecasts have shown Clinton is highly favored to win on Nov. 8. However, all three of FiveThirtyEight’s models show the race has gradually tightened over the last week.

The polls-plus model gives Trump the highest chance of winning among all election forecasts. This model indicates a Trump presidency is more than twice as likely as Upshot suggests. As Silver points out, historically, there’s been a strong correlation between the number of undecided and third-party voters, and polling volatility, which the polls-plus model takes into account.

Clinton has a slightly higher chance of winning according to the polls-only forecast, which projects she has an 73.6 percent chance of winning. Trump’s chances have increased to 26.3 percent from a low of 12 percent.

FiveThirtyEight’s Nowcast, which incorporates new polls very quickly, shows the Democratic nominee having an 72.2 percent chance of winning if the election were to be held today.

Within about an hour of Friday’s news, PredictWise reacted– showing Trump’s chances of winning the presidency rose from 10 percent to 13 percent. Clinton’s chances dropped from 90 percent to 87 percent.

As of Tuesday morning, PredictWise is giving Clinton an 85 percent chance of winning.

On Twitter, PredictWise founder David Rothschild explained he would be surprised if the news will affect voter sentiment, but added he could see it affecting voter enthusiasm. He added early voting is a good thing for Clinton.

Daily Kos shows Clinton currently has a 96 percent chance of winning the presidency, which is the highest of all election forecasts. In a simulated electoral votes projection, Clinton has 334 compared to Trump’s 204. Their projection, which gives Clinton the highest likelihood of winning only takes into account current polling data.

How States Have Shifted

Trump’s poll numbers are improving after they dropped sharply following the release of a 2005 recording in which he made lewd comments about women, and a host of sexual assault allegations.

Traditionally Republican states such as Texas and Georgia moved away from the GOP nominee in the wake of the allegations, but are now shifting back in Trump’s favor.

RealClearPolitics shows Trump with a 7.7-point lead in Texas and 4-point advantage in Georgia.

Last week, the race was tighter in Ohio, a key battleground state. Trump currently leads by an average of 2.5 percentage points in Ohio.

Nevada is an extremely tight race, and has gone back and forth the past several weeks. Clinton currently holds a 1.0 percentage point lead, according to RealClearPolitics.

The candidates are essentially deadlocked in Florida with Trump currently holding a slim 1-point lead according to the Real Clear Politics average. Clinton held a 2.3-point advantage in the Sunshine State a week ago.

Florida’s 29 electoral votes are necessary for a Trump victory.