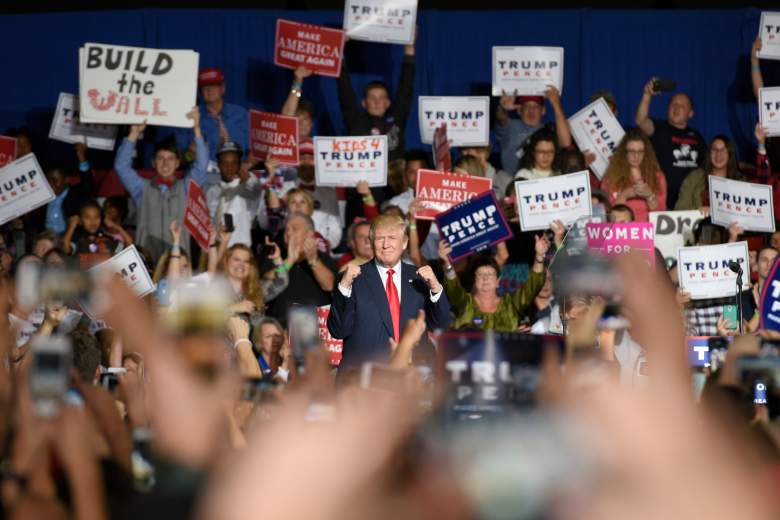 Donald Trump speaks to supporters during a campaign rally. (Getty)

President-Elect Donald Trump is embarking on a tour across the country to celebrate his big win on November 8th.

The Trump team is referring to this as the “USA Thank You 2016 Tour,” during which the president-elect will visit key swing states and express his gratitude. His next rally will be held on Friday, December 9th in Grand Rapids, Michigan. The event is scheduled to take place at the DeltaPlex Arena beginning at 7:00 p.m. Eastern Time. Doors open at 4:00 p.m., and tickets are available on the Trump website.

Next week, Trump will keep the tour going with a stop in West Allis, Wisconsin on Tuesday, December 13th, speaking from the Wisconsin State Fair Exposition Center beginning at 7:00 p.m. Doors open at 4:00 p.m., and tickets are available on the Trump website.

On Thursday, December 15th, Trump will hold an event at the Giant Arena in Hershey, Pennsylvania beginning at 7:00 p.m. Doors open at 4:00 p.m, and tickets are available on the Trump website.

Then, on Friday, December 16th, Trump will speak to supporters in Orlando, Florida at the Central Florida Fairgrounds beginning at 7:00 p.m. Doors open at 4:00 p.m, and tickets are available on the Trump website.

Finally, the last event Trump currently has scheduled will take place on Saturday, December 17th at the Ladd–Peebles Stadium in Mobile, Alabama. This one begins at 3:00 p.m, with doors opening at 11:00 a.m. Tickets are available on the Trump campaign website.

This tour got started on December 1st with a rally at the U.S. Bank Arena in Cincinnati, Ohio. Trump has since made stops in Des Monies, Iowa and Fayetteville, North Carolina. Even though the election is over, these events have felt very much like Trump campaign rallies, complete with “lock her up” chants and complaints about press coverage. Trump has been speaking from a teleprompter using prepared remarks, but he has gone off script quite often and is embracing the stream-of-consciousness style that helped popularize his campaign rallies in the first place.

Taking a look back at the Election Day results, it’s easy to see why Trump has selected these locations to hold his rallies. Wisconsin in particular was a highly important state for him, as winning it allowed Trump to break through the so-called “blue wall,” a collection of states that were considered to be firmly in the Democratic camp.

“We didn’t break it,” Trump said of the blue wall at his Cincinnati rally. “We shattered that sucker. We shattered it, man. That poor wall is busted up.”

Trump is also headed back to Florida next week for the first time since Election Day. This state was also essential for Trump, as it is worth 29 electors and it was thought to be a toss-up all the way until election night. A frequent campaign stop for Trump was New Hampshire, but he ended up losing this state on November 8th, and so it will not be a part of his tour.

Trump repeatedly hinted during the campaign that he might continue to hold rallies even after he won the presidential election. These rallies were the source of much of Trump’s energy while running for president, and they were where he was able to fine-tune many of his ideas and slogans like “lock her up” and “drain the swamp.” These events typically drew crowds of between 5,000 and 10,000 people.

And now that Trump is generally avoiding doing interviews with anyone other than Sean Hannity, these rallies, which are broadcast live on cable news, allow the president-elect to communicate with the American people directly. As was the case during the campaign, Trump’s rallies will also be streamed live on YouTube for those not able to attend.

Loading more stories
wpDiscuz
43
0
Would love your thoughts, please comment.x
()
x
| Reply
President-Elect Donald Trump will soon be holding a "thank you tour" consisting of several rallies in key battleground states. Where is he headed?