An Ohio State University police officer is being hailed as a hero after fatally shooting a man who plowed his car into a group of pedestrians on campus and then began attacking them with a knife.

Officer Alan Horujko, 28, was identified by the university’s police department as the officer who fatally shot Abdul Razak Ali Artan, a student and Somali refugee, on Monday outside an academic building.

Columbus Mayor Andrew Ginther said Horujko went “racing and running right into the heart of the danger. We had a dynamic, well-trained professional today save the lives of many of our residents and students.”

There were 11 people hospitalized in the attack with injuries suffered after being hit by the car and stabbed. They are all expected to survive, officials said Monday.

The investigation into the attack is ongoing and police said they are working to determine a motive.

1. Horujko Saw the Suspect’s Car Drive Into a Crowd & Shot Him Dead About a Minute Later, Police Say

Officer Alan Horujko was working on Ohio State University campus Monday morning when the attack occurred, officials said. He was near the scene because of a fire alarm, which was not related to the attack, according to school officials.

The 28-year-old officer radioed to dispatch at 9:52 a.m. that a car had driven into a crowd of about seven to eight pedestrians near Watts Hall, Monica Moll, the director of public safety at Ohio State, said at a press conference. A few seconds later, Horujko called out indicating an “officer in trouble,” saying there was a man with a knife.

At 9:53 a.m. Horujko called out “shots fired” and he had one person down when he “engaged the suspect,” Moll said.

“So the suspect drove his vehicle into a group of pedestrians, there were some injuries that resulted from that. The suspect then got out of the vehicle with a knife and began cutting individuals in the area, and the officer engaged the suspect and fired shots, and used deadly force to stop the threat,” Moll said. “The threat to safety was ended at that time.”

The university put out an active shooter alert as a precaution and the campus went into lockdown as officers searched for any other suspects. Police later learned through video surveillance that the suspect was alone in his vehicle when he entered the campus and during the entire attack.

The lockdown was lifted about 11 a.m. Monday after the search was completed.

2. He Graduated From Ohio State & Joined the University’s Police Force in 2015

Alan Horujko graduated from Ohio State University in 2012 with a degree in security and intelligence, according to his Linkedin profile.

He joined the Ohio State University police force in January 2015.

“Officer Horujko received his bachelor’s degree from Ohio State, during which he worked for the Student Safety Service,” the police department said in a Facebook post announcing his hiring. “Officer Horujko had been working as a police officer for Ohio Health since earning his Peace Officer Certification last year.”

Horujko told The Lantern, the Ohio State University’s student newspaper, he decided he wanted to become a police officer after working with Student Safety Services. He changed his major from engineering.

“I just couldn’t see myself sitting in a cubicle,” Horujko told the newspaper. “By working (at Student Safety Services) and seeing what the police do, and what Student Safety does on the campus, the kind of behind-the-scenes stuff really led me to a law enforcement career.”

The scene of the shooting at Ohio State University in Columbus. (Cody Sarisky/Twitter)

University President Michael Drake said he spoke with Horujko and thanked him for following his training and stopping the threat in about a minute after the attack occurred.

Praise for Horujko also poured in on the university’s Emergency Management department’s Facebook page, with parents, students and other members of the community thanking him for his actions.

“I am a OSU parent of a Freshman that lives close to where all this happened. I want to thank you, you are a hero,” Missy Stevenson wrote.

“From a graduate student near the attack site, THANK YOU Officer Horujiko!!! We appreciate your service and bravery,” Joni DeGradon Sivey wrote.

“Prayers for this young man. Though he did the right thing and saved who knows how many lives, I”m sure it’s still a difficult thing to have to do. Thank you for protecting our children,” Amy Felkey Orwick said.

Jason Ramsey wrote, “My daughter is a student also. Thanks to all of you for what you have done to protect our children. My prayers go out to Officer Horujko. You did your job and what was necessary, Thank you.” 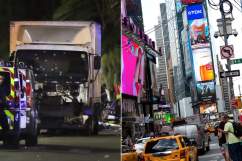 4. Horujko Is an Ohio Native & Is Engaged to be Married Next October

Thank you to the @OSUPOLICE first responder Alan Horujko for his quick and heroic actions. pic.twitter.com/UIaTM12KQu

Horujko is an Ohio native. He was born in Cincinnati and graduated from Fairfield High School in 2007, WCPO-TV reports.

He is engaged to be married in October 2017 to a fellow Ohio State University graduate.

Horujko and his family have declined to comment while the investigation into the attack and shooting remain active.

According to the Springfield News-Sun, Horujko was a Cub Scout and a standout student at Fairfield High School before moving on to Ohio State.

Jill Wilhelm, the band director at the high school, told the newspaper Horujko was a clarinet player in the school’s marching band.

“Sounds like he was in the right place at the right time,” Wilhelm said. “He comes from a wonderful family, and they instilled in him some great values. He was fun-loving in high school and very out-going.”

5. Abdul Artan Was a Student at Ohio State University & a Somali Refugee

The suspect, Abdul Ali Razak Artan, was “completely silent” and “creepy” during the attack, a witness told CNN.

Artan was interview by the student newspaper, The Lantern, in August and talked about the lack of spaces on campus for Muslims to pray. He said he recently transferred into the school after graduating from Columbus State Community College.

“I’m a Muslim, it’s not what the media portrays me to be. If people look at me, a Muslim praying, I don’t know what they’re going to think,” Artan told The Lantern in its “Humans of Ohio State” feature. “It’s the media that put that picture in their heads so they’re just going to have and it, it’s going to make them feel uncomfortable. I was kind of scared right now [of praying in public]. But I just did it. I relied on God. I went over to the corner and just prayed.”

You can read more about the Abdul Artan at the link below: 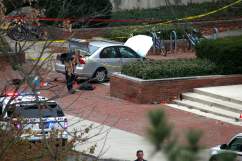