Protesters outside Trump Tower in New York City burned the American flag on November 9 to protest the election of Donald Trump as the United States president.

American flags were also burned during anti-Trump protests in multiple other American cities, including Philadelphia and Los Angeles.

CNN said protesters also burned a flag on the campus of American University in Texas the day after the election. The rhetoric was sharp.

Anti-Trump rally chant "New York hates you" outside Trump Tower the day after he was elected.

Burning the American flag? ??
No excuse for that ever.
Very disrespectful. https://t.co/N1Mxm7y55F

The flag burning in New York City occurred on 5th Avenue as protesters made their way to Trump Tower. The New York protest, which ignited on November, was organized in part through social media, with thousands indicating their desire to take part. 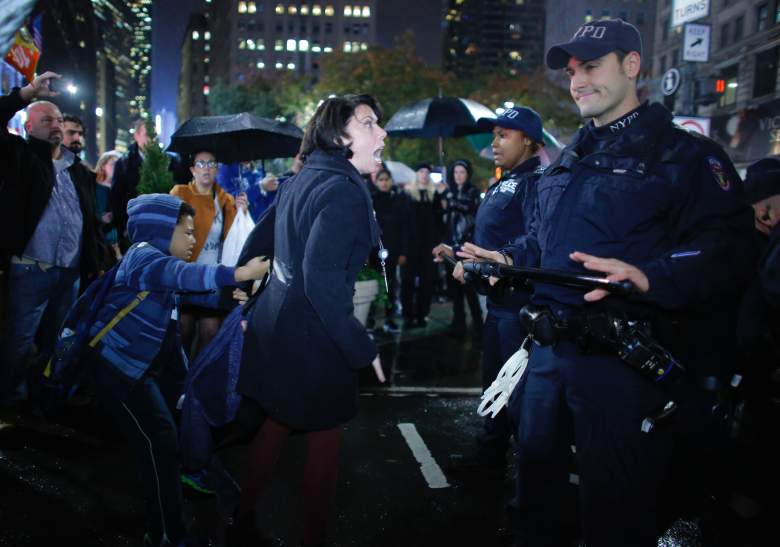 A woman argues with NYPD officers as she takes part in a protest against President-elect Donald Trump in New York City on November 9, 2016. (Getty)

Similar protests also were underway outside Trump Tower in Chicago after the upset election of the controversial billionaire to the White House. Trump won the White House with 279 electoral votes after upsetting Hillary Clinton in rust-belt states that had not voted for a president since the 1980s. Voters in Pennsylvania, Michigan, and Wisconsin gave the presidency to Trump by slim margins after Trump prevailed in the critical state of Florida.

On Tuesday evening, Trump pledged to work for all Americans in his victory speech, toning down some of the incendiary rhetoric that had become a hallmark of the presidential campaign, fueling distrust among non-whites in particular.

Protesters used profanity when referring to Trump and shouted, “Hey, ho, Donald Trump has got to go.”

Up to 8,000 people had said on Facebook that they planned to join the Chicago protest.

You can watch videos from both protests and see photos here: