Its been a long road to the 2016 presidential election, but Nov. 8th is here. Will Trump win? Or will Clinton claim the White House? The world will have to wait a bit longer to find out.

In the meantime, what would a Trump presidency mean for the rest of the world? Specifically, the international stock market? 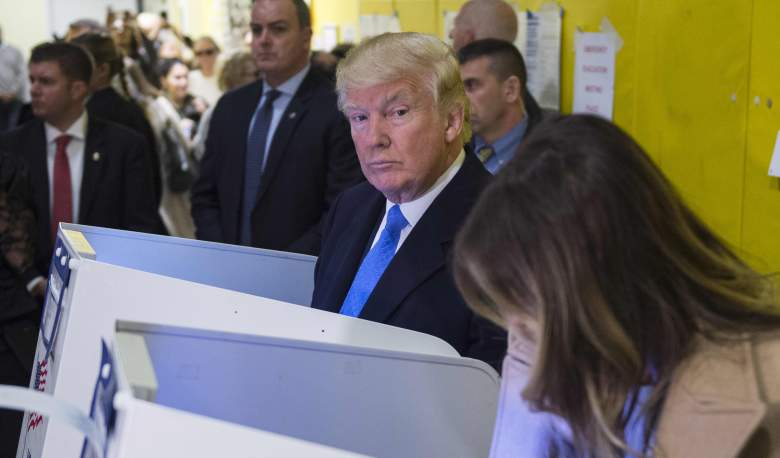 Republican presidential nominee Donald Trump and his wife Melania fill out their ballots at a polling station in a school during the 2016 presidential elections on November 8. (Getty)

According to CNBC, bond yields and stocks have both already started to drop in reaction to the possibility of a Trump presidency.

Two economics professors have actually studied how the world might react to Trump being elected, CNBC reported, and they say that their findings have revealed a sharp, immediate sell-off if Trump wins and a “slight rally” if Clinton wins.

According to Mashable, stocks have already started falling as Trump rallies support and the election gets closer. His position on global trade, specifically that we should do less of it, have caused worldwide concern over the global economy, reported Mashable. When Trump surged in the polls, the markets tanked. Here are the markets currently affected according to Mashable:

Dow futures: Down as much as 500 points as Trump gains traction.

The Peso: The Mexican currency dropped sharply as fears of Trump hammering the economy grow.

Other Markets: Around the world, markets are taking a downturn, specifically Australia, Japan and Hong Kong.

Gold and U.S. treasuries: These have rallied amid attempts to migrate toward safer investments. This shows that investors are worried about the stock market.

In general, Mashable reported, the takeaway is that markets assumed Hillary Clinton would win, but they got caught off guard, and the markets are suffering because of it.

The falling markets amid a Trump rallying call is not dissimilar to the Brexit fiasco, which sent markets into a brief tailspin earlier in 2016.