President Donald Trump delivered his second speech at the second inaugural ball January 20. He asked the crowd if he “should keep his Twitter going” during the speech, which was greeted with an overwhelming applause by the crowd at the event. Here’s his full speech and the dance that followed afterward.

He told the crowd that the “enemies keep saying, ‘Oh, that’s terrible.’ But you know, it’s a way of bypassing the dishonest media, right?”

Also in his second speech of the night, he added on to his popular “Make America Great Again” phrase that he campaigned on, saying he that he’s coined a new phrase, “Make America Greater Than It’s Ever Been.” Trump spoke to the crowd once again vowing to deliver on the promises he campaigned on. The full transcript of his second speech at the second of the three inaugural balls he and his family attended is below:

The Trumps left the second inaugural ball and immediately headed to the third one of the night, the Armed Services Ball. It’s at the final ball of the evening where the Trumps and Pences shared in one last dance with their respective significant other before asking members of the military to share a dance with them.

The Trumps are cut a cake at the ball as well.

Following the Armed Forces Ball, the First and Second families called it a night after over 12 hours of celebrating the presidency. 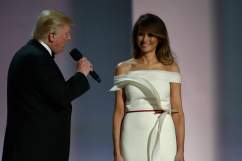 Loading more stories
wpDiscuz
1
0
Would love your thoughts, please comment.x
()
x
| Reply
President Donald Trump delivered the 2nd speech of his inauguration evening January 20. He polled the crowd if he should keep his Twitter. Watch the video here.