While the soon-to-be First Lady chose a sedate black coat for Inauguration Eve, Ivanka, by many accounts, upstaged her by choosing green. According to Hollywood Life, Ivanka’s coat was a “waterfall jacket with two, wide-open ruffled lapels that flowed into a fun, bouncy, high-low cape in the back.”

The Hollywood Reporter saw shades of Jackie O in the social media pic that Ivanka posted of “the coat”: “The photo is very fashion in its faux reality, as if it’s aiming to be one of the old 1960s and 70s’ era Ron Galella paparazzi shots of Jacqueline Kennedy Onassis.”

It was the green outfit that most people were talking about. But the white-and-black number that Ivanka wore to the candlelit dinner on Inauguration Eve was pretty striking too.

Tomorrow will be an incredible day. Goodnight everyone! #Inauguration #MAGA pic.twitter.com/EkkvXwscHA

The back was even more unique.

USA Today reported that Ivanka’s green hue stood out in a sea of black worn by other family members and outshone First Lady-elect Melania Trump. 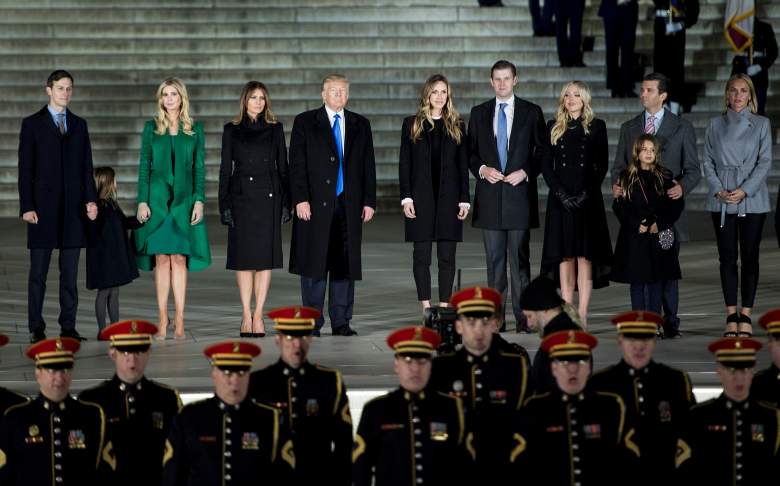 Ivanka Trump and her green dress stood out among the family black garb on Inauguration Eve. (Getty)

“The color green, according to color psychology, is the color associated with such things as new life, nature, growth, energy and renewal. It’s also the color of money, finances, banking, ambition, jealousy and Wall Street,” reported the newspaper.

It was a daring choice that paid off, judging from the fawning reaction to the garment on Twitter.

@IvankaTrump I really like your green dress and coat ?

That green jacket and dress @IvankaTrump is wearing is just gorgeous?????? #Inaug2017 #MAGA

The coat – worn over a green dress of the same distinctive hue – was first glimpsed on Ivanka in New York, when she walked out of the family’s apartment building with her husband and children.

Ivanka Trump is making the green with envy in an emerald dress as she steps out with husband Jared Kushner and… https://t.co/fj4XR7cbcw pic.twitter.com/VkCCFtdkV9

She was still wearing the outfit when she disembarked from the military plane that brought the Trump family to Washington D.C. for inauguration festivities.

Ivanka Trump, her son Theo, her husband Jared Kushner and daughter Arabella, step off a plane upon arrival at Andrews Air Force Base in Maryland on January 19, 2017. (Getty)

She was also photographed in it again with her husband, father and stepmother, Melania, at the Lincoln Memorial.

US President-elect Donald Trump (R) salutes as his wife Melania (2L) and daughter Ivanka Trump (C) looks on during an inauguration concert at the Lincoln Memorial on the national mall in Washington, DC, on January 19, 2017. (Getty)

Jared Kushner, the son-in-law of President-elect Donald Trump, along with his wife Ivanka Trump arrive for the the Inauguration Welcome Concert at the Lincoln Memorial. (Getty)

Ivanka’s father, Donald Trump, will not take the oath of office until January 20, 2017, but the Trumps are participating in a series of activities on Inauguration Eve, such as a wreath laying ceremony and an exclusive candlelit dinner.

It wasn’t the first time that Ivanka dazzled in green. Remember the second presidential debate?