Gabbard recently returned to the United States after making the unannounced and controversial trip to Syria. She spoke to Tapper on Wednesday afternoon, confirming that she met with Assad during the visit:

She told Tapper she didn’t plan on meeting with Assad, but decided to do so after the opportunity came up.

Gabbard said there “has to be a conversation” with Assad, despite “whatever you think” about him, in order for a peace agreement to be made:

Rep. Tulsi Gabbard: "There has to be a conversation" with Assad https://t.co/f4fhrRVBzL https://t.co/TqxKxU1pH6

Gabbard also told Tapper that the Syrians she met with said there are “no moderate rebels” in Syria, and the U.S and its allies must stop funding the rebel fighters. She said if Assad were to be overthrown, terrorists would take over the country.

Rep. Tulsi Gabbard: People in Syria told me "there are no moderate rebels" https://t.co/6OZtrfIwim https://t.co/PAedy1LFea

In addition to her interview with Tapper, Gabbard released a statement about the meeting and trip on Wednesday:

My visit to Syria has made it abundantly clear: Our counterproductive regime change war does not serve America’s interest, and it certainly isn’t in the interest of the Syrian people.

As I visited with people from across the country, and heard heartbreaking stories of how this war has devastated their lives, I was asked ‘Why is the United States and its allies helping al-Qaeda and other terrorist groups to take over Syria? Syria did not attack the United States. Al-Qaeda did.’ I had no answer.

I return to Washington, D.C. with even greater resolve to end our illegal war to overthrow the Syrian government. I call upon Congress and the new administration to answer the pleas of the Syrian people immediately and support the Stop Arming Terrorists Act. We must stop directly and indirectly supporting terrorists – directly by providing weapons, training and logistical support to rebel groups affiliated with al-Qaeda and ISIS; and indirectly through Saudi Arabia, the Gulf States and Turkey, who in turn support these terrorist groups. We must end our war to overthrow the Syrian government and focus our attention on defeating al-Qaeda and ISIS.

From Iraq to Libya and now in Syria, the U.S. has waged wars of regime change, each resulting in unimaginable suffering, devastating loss of life and the strengthening of groups like al-Qaeda and ISIS.

Originally, I had no intention of meeting with Assad, but when given the opportunity, I felt it was important to take it. I think we should be ready to meet with anyone if there’s a chance it can help bring about an end to this war, which is causing the Syrian people so much suffering.

The U.S. must stop supporting terrorists who are destroying Syria and her people. The U.S. and other countries fueling this war must stop immediately. We must allow the Syrian people to try to recover from this terrible war.

The congresswoman made the trip to Syria last week. She has been criticized for making the trip and providing a platform for Assad’s regime.

“She felt it was important to meet with a number of individuals and groups including religious leaders, humanitarian workers, refugees and government and community leaders,” Gabbard spokeswoman Emily Latimer said in a statement to the Washington Post.

She released video from the trip on Wednesday:

She also wrote about the trip in a post on Medium.

Rep. Tulsi Gabbard, 35, has represented Hawaii’s 2nd Congressional District since 2013 and is considered by many to be a rising star in the Democratic ranks.

going to be a huge issue for Gabbard, who was floated by some as a rising star in the Dem party. Ryan, Pelosi had NO IDEA she was doing this https://t.co/yjBQPPxFdz

She is a major in the Army National Guard, and served for 12 months in Iraq. Latimer told Hawaii News Now that Gabbard “has long been committed to peace and ending counterproductive, interventionist wars.”

“As a member of the Armed Services and Foreign Affairs Committees, and as an individual committed to doing all she can to promote and work for peace, she felt it was important to meet with a number of individuals and groups including religious leaders, humanitarian workers, refugees and government and community leaders,” Latimer said in a statement.

One of Gabbard’s critics upon her return has been Republican Congressman Adam Kinzinger, of Illinois. Kinzinger, who is a major in the Air National Guard, tweeted that he hoped Gabbard didn’t meet with Assad.

After Gabbard confirmed she did meet with the Syrian president, Kinzinger again took to Twitter to slam the meeting:

Would certainly make it difficult to find the moderate Syrians if #Assad is your tour guide, @TulsiGabbard. #dictatorship https://t.co/tE5MRqrcIo

Charles Lister, a senior fellow at the Middle East Institute, took it a step further, calling Gabbard a “Assad apologist.”

The trip was funded by Arab American Community Center for Economic and Social Services-Ohio, Politico reports. 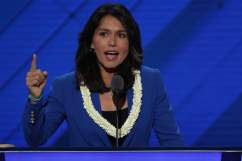