A veteran California police officer was killed in a shootout with a gang member Monday after responding to a traffic crash, Whittier Police say.

Officer Keith Boyer, 53, was called to crash about 8:30 a.m. in the area of Colima Road and mar Vista Street in Whittier, KTLA-TV reports. While Boyer and another officer were patting down a man who had crashed his vehicle into two other cars, the man opened fire on them.

The suspect and the other officer were wounded, but are both expected to survive. Boyer’s partner, Officer Patrick Hazell, who has been a Whittier officer for three years, was in stable condition Monday night.

Michael Mejia, 26, is the suspect in the shooting, police said Tuesday. He has not yet been charged and remains hospitalized. He is also the suspect in another murder in East Los Angeles that occurred before Boyer had been killed. He had been in and out of jail in recent months, including a 10-day stint that ended just over a week before the shootings.

“It’s extremely tragic,” Los Angeles County Sheriff’s Lieutenant John Corina told reporters. “You’ve got a couple officers who just responded to a traffic accident, and they think they’re there to help out people involved in a traffic accident. Next thing they know, they got this guy shooting at them. He shoots both of them and kills one of them.”

“When they get him out of the car, they go to pat him down for weapons, they can see he’s got tattoos all over his face and all over his neck,” Corina said. He then pulled out a semi-automatic handgun and began firing.

Police believe the suspect was driving a stolen vehicle after killing a man in East Los Angeles, the Los Angeles Times reports.

1. Boyer Was Gunned Down by a Known Gang Member Paroled Just Days Before the Shooting, Police Say

The suspect, Michael Christopher Mejia was shot during the incident and is expected to face charges. Police said the investigation is still ongoing. Authorities have called the suspect a known gang member and said he was released from prison on early parole about 10 days ago, the Los Angeles Times reports.

“He started firing at the officers and they returned fire,” Los Angeles County Sheriff’s Department Lieutenant John Corina said. “We are still looking into that, why he just opened fire.”

Corina said it was a routine traffic call and the officers did not know the car involved in the crash had been stolen.

“It seems like a simple traffic accident and next thing they know they’re in a gunfight,” Corina told reporters. “You never know when you respond to a call, what you are going to run into.”

Whittier Police Chief John Piper said at a press conference that the suspect was released from custody early and put blame on a set of new laws aimed at reducing incarcerations in California, according to the Times.

A parole check had recently been conducted at his home, KABC-TV reports.

He has been in and out of jail several times since July 2016 for probation violations, the Times reports. He spent 10 days in jail in July. He was then arrested again in September. It is not clear how long he spent in jail for that violation.

Mejia was then arrested again in January for violating his probation and sentenced to 40 days in jail, but was released after spending just 10 days behind bars. On February 2 he was arrested by deputies from the Los Angeles Sheriff’s Office for violating the terms of his release. He was given “flash incarceration” and released after 10 days on February 11.

Then, less than 10 days after that stint in jail, he shot his cousin, stole his car and killed the Whittier police officer, police said.

Details of the violations were not immediately available, but Los Angeles County Sheriff’s Office Lieutenant John Corina told him they “were all different incidents.”

According to the Whittier Daily News, Piper was referring to AB 109, a state law mandating early prison releases, and Proposition 47, which turned some felony offenses to misdemeanors. AB 109 was signd into law by Governor Jerry Brown in 2011 and voters approved Proposition 47 in 2014.

“You have no idea how it’s changed in the last four years. We have statistics to show it,” Piper said. He told reporters that in recent years, the highest number of calls for service have been for resisting arrest on officers. He said he had never seen that before in his 25 years in law enforcement.

“This is a senseless tragedy that did not need to happen,” Piper said.

“I’m not going to speak about the suspect because frankly, I don’t think he’s worth speaking about,” Piper said. 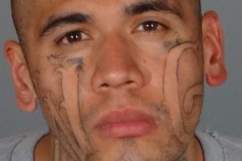 2. His Chief Called the 27-Year Veteran of the Whittier Force ‘the Best of the Best’

Whittier Police Chief Jeff Piper called Boyer “the best of the best,” at a press conference announcing his death. “He was a personal friend of mine for over 25 years,” Piper told reporters.

“It’s really hard for me to hold back my tears because all of us have been grieving since 10 this morning and I didn’t think I had any tears left,” Piper said. “But everyone needs to know what these officers are dealing with on a daily basis, you have no idea how it has changed in the last four years.”

Boyer joined the department in 1989. He worked as a dispatcher, jailer and reserve officer before moving to patrol, KTLA-TV reports.

“It is a tragic reminder that every day, police officers risk their own lives to protect and serve their communities,” Los Angeles County Supervisor Janice Hahn said in a statement. “My heart is with the family of this fallen officer and his colleagues in the Whittier Police Department as they grieve the loss of one of their own and as we continue to pray for the recovery of the officer who was wounded in this morning’s incident.”

3. A Procession of Officers Escorted Boyer to the Coroner’s Office

A line of police officers escorted Boyer’s body from the hospital where he died to the coroner’s officer on Monday. You can watch the heartbreaking procession above. Mourners also placed flowers and candles outside the police headquarters and a prayer vigil is set for 6 p.m. there, the Los Angeles Times reports.

According to the Times, the Whittier Police Department has about 128 sworn officers who patrol Whittier and the city of Santa Fe Springs in southeastern Los Angeles County.

Boyer is the third officer killed in the line of duty in the 100-year history of the department. The other officers were killed in 1977 and 1979.

4. Boyer Played Drums in a Community Band That Performs for Charity

Boyer played drums in a community band that performs for charity, the Los Angeles Times reports.

McNeal told the newspaper Boyer was a lifelong Whittier resident and the two met a few years ago through a mutual friend when McNeal’s band needed a drummer.

“He was an exceptional musician,” McNeal said. “When he joined our band, he elevated us to a new level that wouldn’t have been possible. His skill was such that we were able to play more challenging, more difficult songs.”

5. His Daughter-in-Law Says He Was a ‘Loving Father, Goofy, Talented & Brave’

In a touching post on her Facebook page, Boyer’s daughter-in-law, Meagan, paid tribute to the fallen officer:

My father-in-law is a hero. Today will leave a wound in my family that is indescribable. However, I don’t wish to make a sad post. I want to tell the world who Keith Boyer really was. This man was a loving father, goofy, talented, and brave. He welcomed me into his family from day one. He believed in what he did. He wanted to make the world a better, safer place. I never heard one racial slur come from his mouth. He was an incredibly kind and loving man. He played the drums like a boss. The world lost an incredible man today, but God’s band gained an incredible drummer! Greater love hath no man than this, that a man lay down his life for his friends. John 15:13

According to Whittier Police Chief Jeff Piper, Boyer had recently talked about retiring. He was a mentor to younger officers.

“He was respected for his many years of experience and younger officers looked to him for advice and guidance,” Piper said.

Loading more stories
wpDiscuz
18
0
Would love your thoughts, please comment.x
()
x
| Reply
Officer Keith Boyer, of the Whittier Police Department, was fatally shot after responding to a crash in the California city. Another officer and the suspect were also shot.