A 22-year-old undocumented immigrant has been detained by ICE after delivering a speech at an immigration rally.

Daniela Vargas on Wednesday said that she is fearful of being deported under President Donald Trump; while she was on her way home from giving that speech, she was pulled over and arrested by U.S. Immigration and Customs Enforcement.

Here’s what you need to know about the case of Daniela Vargas.

1. She Was Brought to the United States From Argentina When She Was 7

According to The New York Times, Daniela Vargas was brought to the United States illegally by her parents when she was 7-years-old; she was originally born in Argentina.

“When I was seven years old, my parents sacrificed everything they had ever known to bring my brother and I into this country to establish a better lifestyle,” she said in a press conference on Wednesday.

It was because of people like Vargas that President Obama in 2012 began the Deferred Action for Childhood Arrivals policy. This shields from deportation illegal aliens who entered the country before they were 16 years old. In order to be eligible, they must be either in school or be a high school graduate, and they must not have been convicted of a felony. Those who are protected under DACA still do not have a pathway to citizenship.

President Donald Trump has said that he only wants to deport “the bad ones” and that he wants to show “tremendous heart” for those eligible for DACA.

2. Her Brother & Father Had Been Previously Detained by ICE 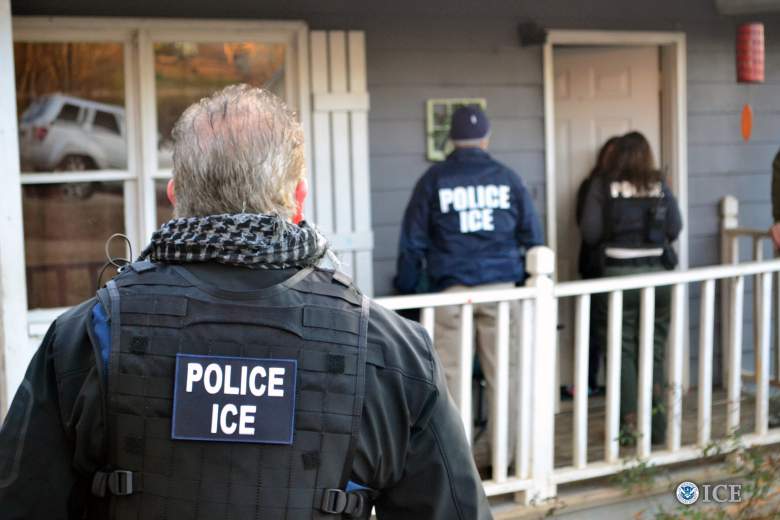 Foreign nationals are arrested during a targeted enforcement operation conducted by U.S. Immigration and Customs Enforcement on February 9, 2017 in Atlanta, Georgia. (Getty)

Vargas told The Huffington Post that she was half-asleep in her home when her father kissed her goodbye on his way to work and was detained by ICE agents. She did not see her brother before he was detained.

Vargas says that she hid in her closest that day but that ICE agents came in hours later with guns and a warrant, breaking down her door. She was handcuffed but was later released.

“During that time, I couldn’t even breathe, honestly,” she told The Clarion-Ledger. “I just watched them handcuff my dad and take them. I was scared for my life. I didn’t know. I didn’t know anything. I called my mom and I just let out a cry. I didn’t even get to see my brother leave; I think that was the harshest thing for me.”

She told The Clarion-Ledger that she planned to go into hiding after her father and brother were detained, as she feared being deported herself. Instead, she held a news conference with immigration lawyers in Jackson, Mississippi on March 1st, during which she told her story and outed herself as an undocumented immigrant.

“Today, my father and brother await deportation while I continue to fight this battle as a DREAMer to help contribute to this country, which I feel is very much my country,” she said in her speech.

3. Her DACA Status Expired in November, But She Reapplied Last Month

Although Daniela Vargas had previously benefited from the Deferred Action for Childhood Arrivals program, her DACA status recently expired; DACA recipients must renew every two years.

It costs $495 to reapply for DACA. According to CNN, Vargas put off reapplying until she could save up the money to do so, and she finally submitted her application in February. But it takes a while to get approved, which is why it’s recommended that DACA recipients reapply a few months before their status expires.

So when Vargas delivered her speech on Wednesday, she was in the process of regaining DACA status but had not yet been approved. Her lawyer told ABC News that the application was received by the Department of Homeland Security on February 14th.

4. She Will Be Deported Without a Hearing

According to ABC News, Vargas left the press conference with her friend on Wednesday only to be pulled over by ICE agents, who knocked on the car window and said, “You know who we are, you know why we’re here.”

Vargas’ friend told ABC News that ICE agents were “rough” while detaining her.

An ICE official said on Wednesday that Vargas was not detained last month because ICE was under the impression that she had DACA status, but when they found out that her status had expired, that’s when they decided to detain her.

On Friday, The Associated Press reported that this case will be handled as a visa overstay, meaning Vargas will be deported without being given hearing.

5. This Comes After Daniel Ramirez Medina, Another DACA Recipient, Was Detained by ICE

Daniela Vargas is not the first DACA recipient to be detained by ICE in recent weeks.

Last month, ICE agents showed up at Daniel Ramirez Medina’s father’s house to arrest him, as he was in the U.S. illegally. But ICE also arrested Daniel Medina himself, even though he was a DACA recipient, and unlike Daniela Vargas, Medina still had DACA status at the time of the arrest. This was the first known instance of a DACA recipient being detained by ICE.

“This is a clear violation of his rights,” Medina’s lawyer told The New York Times. “There was a solemn promise from the executive branch that they would be protected. People have staked their lives and well-being on that promise.”

ICE said that Medina was arrested because he was a “self-admitted gang member” who is a risk to public safety. DACA recipients can have their status revoked at any time if they are determined to be a threat to national security. Medina’s lawyer said that his client was pressured by ICE agents to say that he is affiliated with a gang, something he “unequivocally denies,” according to The New York Times. Medina is now suing the federal government.

In January, Trump said that DACA recipients “shouldn’t be very worried” because he has “a big heart.”