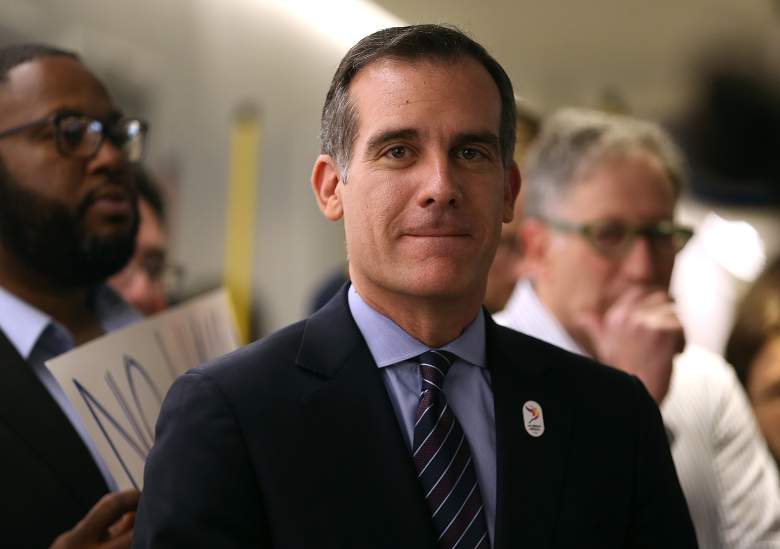 While there are no shortage of candidates on the ballot, Schwartz has the best chance to compete with Garcetti. Schwartz worked in California for the Barack Obama campaign during both the primary and general election.

The strategist also worked for Michael Dukakis and Bill Clinton. The Los Angeles Times suggests the two candidates have a lot in common and would be working together if they were not opponents. Both are progressive Democrats who worked to get Obama elected.

Garcetti beat out Wendy Gruel in 2013 in the election to succeed Antonio Villaraigosa as mayor. He is no stranger to public life. Garcetti’s father, Gil Garcetti, was a long-time L.A. County District Attorney. Gil Garcetti is known nationally for his work on the O.J. Simpson case.

Garcetti and his wife, Amy Wakeland, live in a renovated house in Echo Park. Unlike her husband, Wakeland does not relish being in the public eye. The couple adopted a daughter, Maya, who is four. Just because Wakeland does not enjoy the spotlight, does not mean she is not involved. Los Angeles Magazine writes about her political invovlement:

They married in 2009. Forty-six years old, Wakeland is known for a demeanor that is the opposite of the mayor’s. ‘She is fierce,’ says Torie Osborn, a deputy mayor under Villaraigosa who has worked with Wakeland on various initiatives.

Wakeland recruited many of Garcetti’s top aides. Her fingerprints are on some of his most progressive policy initiatives, such as insisting that at least half of the city commissioners be women and establishing a citywide hike in the minimum wage (an issue she’d been working on for years with nonprofits). And it was Wakeland who trudged through the paperwork that enabled the couple to become foster parents to numerous children, including Maya, the baby they wound up adopting.

He spoke at the 2016 Democratic National Convention where he referred to himself as “just your average Mexican-American Jewish Italian”. According to The Washington Post, Garcetti grew up in Southern California and was a Rhodes Scholar at Oxford University.

As a councilman, the Spanish-speaking Garcetti prided himself on being a conciliator who listened to every voice at the table. That amiable profile helped him to be elected president of the 15-member council but also inspired charges that he could be too malleable, not always following through on promises.

Yet as city budget deficits in recent years spiraled into the hundreds of millions of dollars, Garcetti was at the center of negotiations to balance the books. He helped persuade his council colleagues to agree to cutbacks, including reducing the city workforce, raising the retirement age for future civilian workers from 55 to 65 and increasing the amount employees pay toward pensions and healthcare.

Fast forward to the 2017 election where the Los Angeles Times again spoke favorably about Garcetti in the paper’s endorsement of him for a second term but remains skeptical about his long-term commitment to the post.

Ten Angelenos are running against Garcetti for the job of mayor. They offer interesting ideas for increasing transparency and improving services, but none have the experience to run the nation’s second-largest city for the next 5½ years.

Garcetti, meanwhile, appears to have political ambitions beyond L.A. Despite having no serious challenger, he’s raised $3.1 million already and is continuing to fundraise. So what’s going on? Is he planning to stick around — or will he jump ship to run for the next major seat that comes open? Rather than a placeholder mayor waiting for his next career move, Los Angeles requires a committed leader who is willing to invest the time and energy required to help L.A. evolve into a modern city. If Garcetti wins, he should stay put and do the job.

With rumors of a potential run for California governor, Schwartz urged Garcetti to take a pledge to serve the full term. “You can’t be mayor while you’re running [for governor]. You would barely be serving,” Schwartz told the Los Angeles Times. The Garcetti campaign dismissed the pledge a political stunt by Schwartz.

Schwartz explains his decision to run for mayor on his campaign website.

“I’m running for Mayor of Los Angeles because we can do better by everyday Angelenos. Living here is becoming too expensive, our streets are badly damaged and full of trash, crime is on the rise. These issues aren’t being dealt with because our politicians are busy catering to developers and political insiders. My campaign is about making sure you come first, not City Hall insiders and special interests,” Schwartz writes.

Loading more stories
wpDiscuz
0
0
Would love your thoughts, please comment.x
()
x
| Reply
Eric Garcetti and nine other candidates are running for Los Angeles mayor today. Get to know the current mayor and the candidates that oppose him.