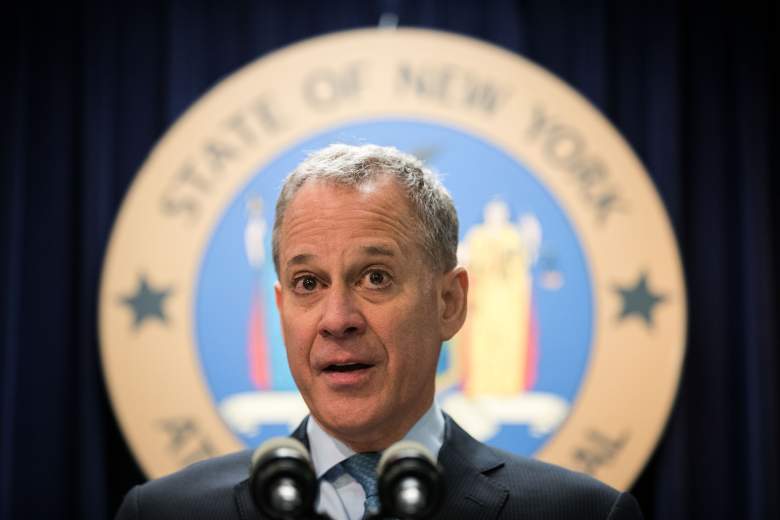 Eric Schneiderman speaks during a press conference at the office of the New York Attorney General, September 13, 2016 in New York City. (Getty)

In a statement released minutes after the second travel ban was announced, Schneiderman said that the president is not above the Constitution and that this new travel ban is still discriminatory towards Muslims.

“This doesn’t just harm the families caught in the chaos of President Trump’s draconian policies – it’s diametrically opposed to our values, and makes us less safe,” Schneiderman said. “My office is closely reviewing the new executive order, and I stand ready to litigate – again – in order to protect New York’s families, institutions, and economy.”

While the White House may have made changes, the intent to discriminate against Muslims remains clear. #MuslimBan2 pic.twitter.com/6xi8QktBFW

Here’s what you need to know about New York Attorney General Eric Schneiderman.

1. He Joined a Federal Suit Against the First Travel Ban 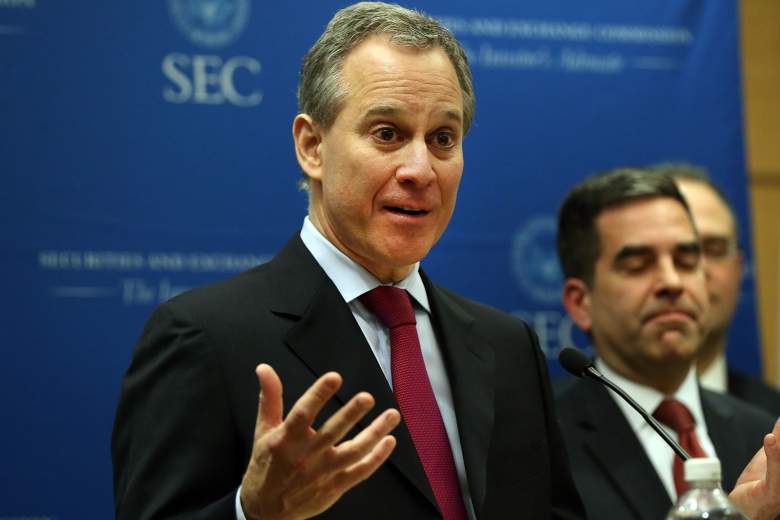 Eric Schneiderman is joined by SEC Enforcement Director Andrew Ceresney where they announced a settlement with Barclays and Credit Suisse on federal and state charges on February 1, 2016 in New York City. (Getty)

You may have noticed that Schneiderman said in his statement today that he is ready to litigate “again.” That’s because he already filed suit against the Trump administration following the signing of the first travel ban.

In late January, Schneiderman joined in on the federal lawsuit against the travel ban originally filed by the American Civil Liberties Union.

“I will continue to do everything in my power to not just fight this executive order, but to protect the families caught in the chaos sown by President Trump’s hasty and irresponsible implementation,” Schneiderman said at the time, according to the New York Daily News. “Including pressing DHS and CBP to provide a full list of those still detained and allow them access to legal service providers.”

Schneiderman said in an interview with NPR in February that the travel ban “was an all-out assault against the rights of hundreds of thousands of New Yorkers, against our economy, our health care and educational institutions. And I’m absolutely going to get involved when that happens.”

2. He Filed the Lawsuit Against Trump University 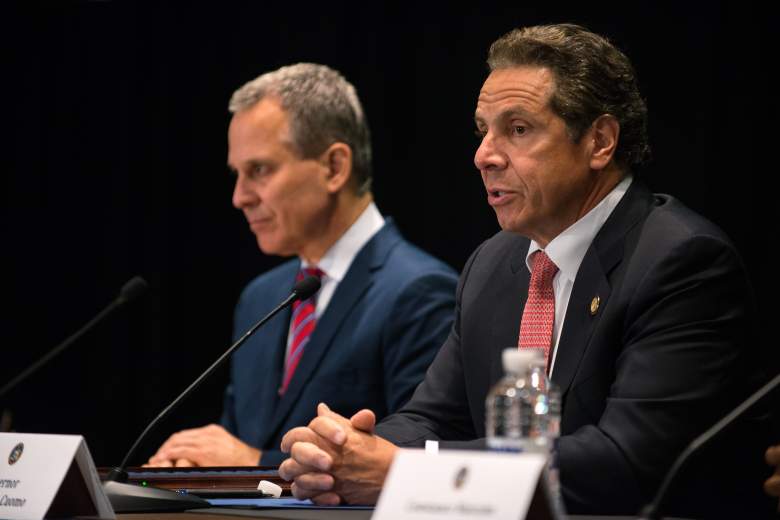 When Schneiderman joined in on the lawsuit against President Donald Trump’s travel ban, this was not the first time that he challenged Trump in court.

In 2013, Schneiderman filed a civil lawsuit against Donald Trump’s Trump University, saying that the school used illegal business practices and that it was “an elaborate bait-and-switch,” according to The New York Times.

“No one, no matter how rich or famous they are, has a right to scam hardworking New Yorkers,” Schneiderman said in a statement at the time. “Anyone who does should expect to be held accountable.”

This suit continued for years until Trump finally settled for $25 million a few days after the November election. This was despite the fact that Trump repeatedly said that he would never settle the case.

“I settled the Trump University lawsuit for a small fraction of the potential award because as President I have to focus on our country,” Trump wrote on Twitter at the time. “The ONLY bad thing about winning the Presidency is that I did not have the time to go through a long but winning trial on Trump U. Too bad!” 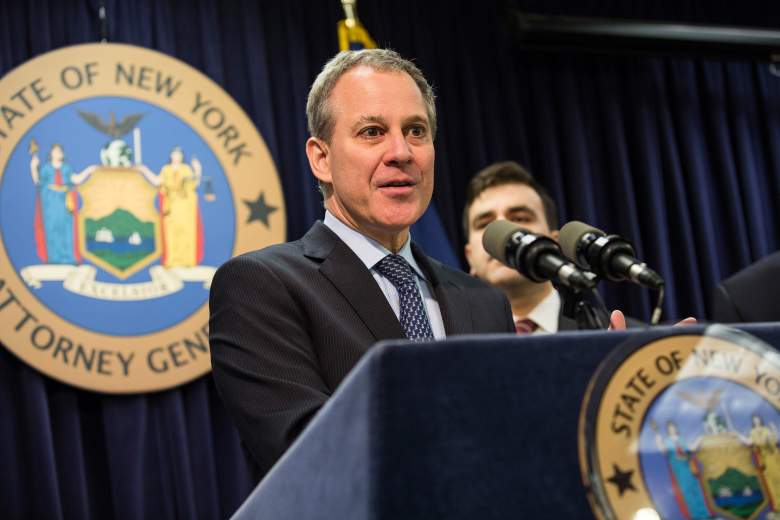 Eric Schneiderman speaks at a press conference announcing new guidelines and testing standards that GNC will adhere to for their herbal supplements and extracts on March 30, 2015 in New York City. (Getty)

Eric Schneiderman has been a frequent target of Donald Trump’s on Twitter, as Trump has gone after Schneiderman in at least 27 separate tweets over the years, calling him a hack and accusing him of being a drug addict.

In August 2013, Trump said that Schneiderman is a “lightweight” who “is trying to extort me with a civil lawsuit.” “Lightweight” is a common insult of Trump’s, and he has also used that word to describe Marco Rubio, Megyn Kelly, Don Lemon, Michael Morell, Rand Paul, and Jeb Bush.

Lightweight A.G. Eric Schneiderman, who has been a total failure in office, failed to report the 98% approval rating of students for courses

Trump also accused Schneiderman of offering to drop the suit in exchange for political donations.

Lightweight A.G. Eric Schneiderman asked us for political contributions DURING his investigation of us,then sued for $40 million.Dopey guy!

Why is lightweight A.G. Eric Schneiderman allowed to ask for campaign contributions from my people during settlement negotiations?

In another tweet, Trump said that Schneiderman is worse than Elliot Spitzer and Anthony Weiner.

Weiner is gone, Spitzer is gone – next will be lightweight A.G. Eric Schneiderman. Is he a crook? Wait and see, worse than Spitzer or Weiner

In September 2013, Trump said that Schneiderman is the most incompetent and least respected attorney general in the United States.

Lightweight A.G. Eric Schneiderman is perhaps the most incompetent and least respected A.G. in the U.S. He is a total joke!

Trump also accused Barack Obama of being involved in the decision to sue Trump over his university.

Wow, l just found out that A.G. Schneiderman met with President Obama in Syracuse on Thursday — and sued me on Saturday! Same as IRS etc.

Governor Cuomo is right about one thing – Attorney General Eric Schneiderman does wear eyeliner! What the hell is up with him?

In an October 2014 interview with Fox and Friends, Trump cited a New York Post article that claims that Schneiderman did cocaine in the mid 2000s.

“They’re saying he took coke,” Trump said. “As far as I’m concerned, he probably still does.”

4. He Has Criticized Other Members of the Trump Administration 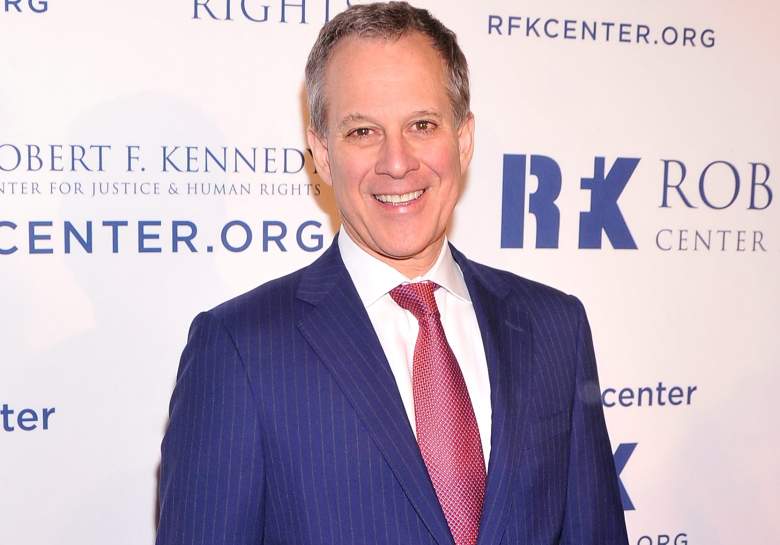 Eric Schneiderman has been quite tough on many members of the Trump administration, not just the president himself.

After the nomination of Scott Pruitt to lead the Environmental Protection Agency, Schneiderman said that Pruitt  “is a dangerous and unqualified choice. As Attorney General, Scott Pruitt consistently failed to uphold his responsibility to protect our nation’s air and water, instead acting as an agent of the oil and gas industry – at the expense of the American people – every time.”

He went on to say that if Pruitt does not uphold America’s environmental laws, “I stand ready to use the full power of my office to compel their enforcement by the agency.”

In December, Schneiderman wrote a letter to President Trump warning him not to dismantle Obama’s Clean Power Plan.

“…[W]e advocate that you reject misguided advice that the Clean Power Plan be discarded; advice that, if followed, would assuredly lead to more litigation,” the letter says.

“New Yorkers have a right to comprehensive, cost-free access to birth control,” Schneiderman said. “With the Affordable Care Act under attack in Washington, it’s all the more critical that New York act now to protect these rights. The Comprehensive Contraception Coverage Act will ensure that all New Yorkers have access to the birth control method they need to stay healthy and effectively plan for their future – no matter what happens in Congress.”

5. His Ex-Wife is Jennifer Cunningham, a Lobbyist 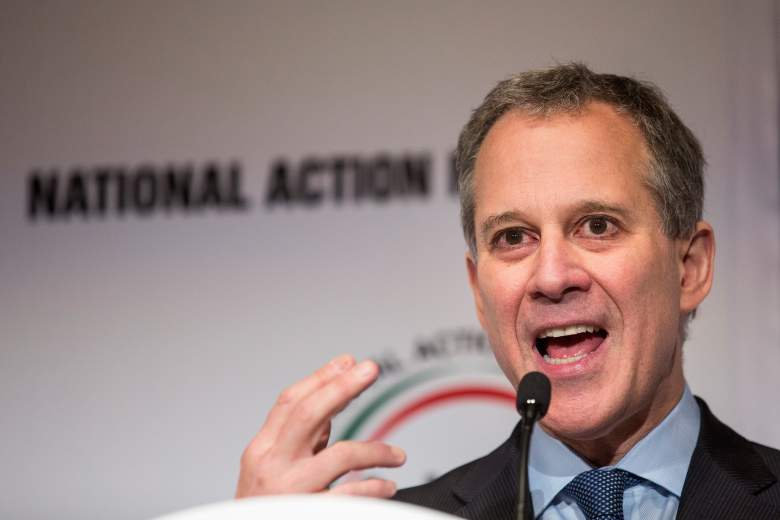 Eric and Jennifer divorced in 1996. These days, she works as a lobbyist in New York, and in 2010, The New York Post dubbed her the “most powerful woman in Albany.” She was described as one of Governor Andrew Cuomo’s best friends and the most influential woman in his inner circle.

In 2010, Jennifer Cunnington resigned from her lobbying firm, not wanting to create the appearance of a conflict of interest with the governor being one of her close friends and the attorney general being her ex-husband.

“I wasn’t willing to risk having everyone question my motives,” Cunningham told The Post. “There’s a perception that I’m close with Cuomo — and I am. I don’t want him and I don’t want Eric to have someone alleging that they did or didn’t do something because of me. For everyone’s sake, I can go do something else with my life.”

She is the former vice president of 1199 SEIU, a health-care union, and in 2016, she registered as a lobbying to again lobby for 1199 SEIU, according to the Times Union.