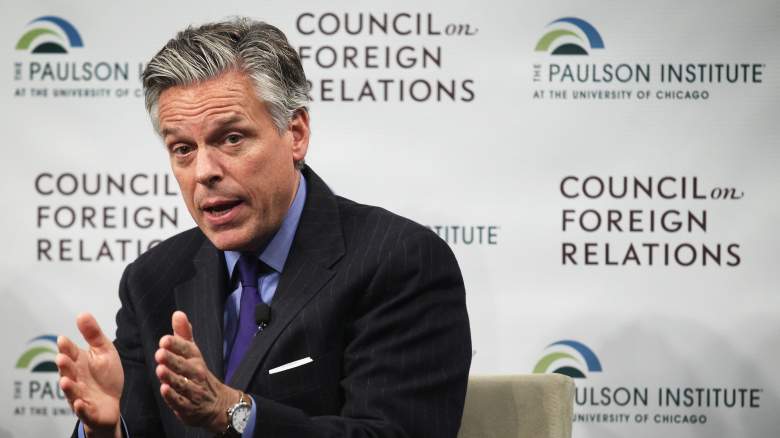 Jon M. Huntsman Jr., who served as the Governor of Utah from 2005 to 2009 and was President Barack Obama’s first ambassador to China, will become President Donald Trump’s Ambassador to Russia. Huntsman also unsuccessfully ran against Mitt Romney for the Republican Presidential nomination in 2012.

Fox News confirmed that Huntsman will be Trump’s pick to be the U.S. Ambassador to Russia.

People briefed on the talks told the New York Times that Huntsman was being considered by Trump for the role. CNN reports that Huntsman already met with Secretary of State Rex Tillerson a week ago before getting the role.

Huntsman has been married to Mary Kaye Cooper since 1983 and the two have seven children. Their second-oldest daughter, Abigail Huntsman, is a reporter for Fox News. Their two youngest children were adopted from China and India.

Huntsman is the son of billionaire Jon Hunstman Sr. Forbes estimates that Hunstman’s father has a net worth of $1.06 billion. He earned his fortune as the founder of Huntsman Corp.

Here’s a look at Huntsman’s career and what he’s said about Trump in the past.

1. Becoming Russian Ambassador Would Remove Him as a Challenger to Senator Orrin Hatch 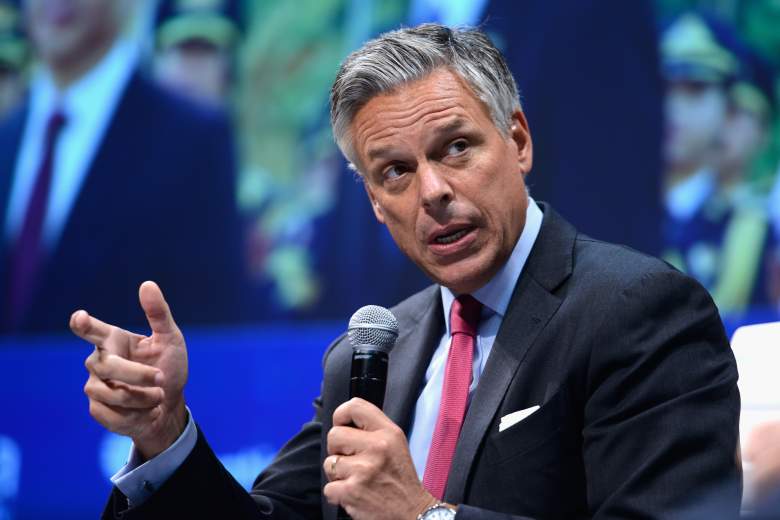 The 56-year-old Huntsman hasn’t been in politics since he dropped out of the 2012 GOP presidential race early on, but he was considering returning. In a email to the Salt Lake City Tribune in November 2016, Huntsman said his team was “going to take a good look at” potentially running against Senator Orrin Hatch in a primary in 2018, when Hatch is up for re-election.

“We’re going to take a good look at it over the next six months to see how best to serve a great state,” Hatch told the Tribune. “No more complicated than that.”

The 82-year-old Hatch has been in the U.S. Senate since 1977 and is seen as vulnerable, at least in a primary. In a January 2017 poll conducted by the Tribune, Huntsman would beat Hatch. In fact, 58 percent of those polled think that Hatch shouldn’t run for re-election.

If Huntsman takes the Russian ambassadorship, Trump would be removing Hatch’s top challenger. Hatch endorsed Trump early on in the 2016 presidential campaign.

2. Huntsman Endorsed Trump, but Wanted Him to Drop Out of the Race After the ‘Access Hollywood’ Tape 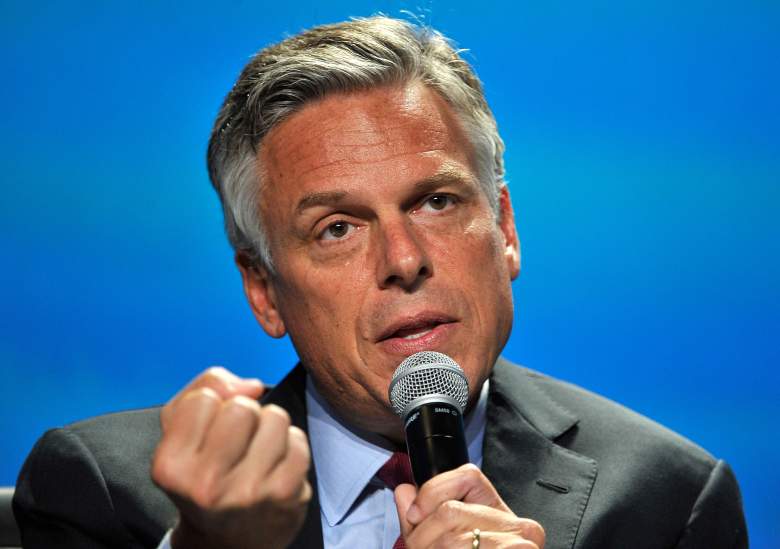 Huntsman endorsed Trump back in May 2016 in a interview with Politico.

“We’ve had enough intraparty fighting. Now’s the time to stitch together a winning coalition,” Huntsman told the site. “And it’s been clear almost from the beginning that Donald Trump has the ability to assemble a nontraditional bloc of supporters. … The ability to cut across traditional party boundaries — like ’80, ’92 and 2008 — will be key, and Trump is much better positioned to achieve that.”

But in October 2016, after a damaging Access Hollywood tape was released, Huntsman called for Trump to drop out of the race.

“In a campaign cycle that has been nothing but a race to the bottom — at such a critical moment for our nation — and with so many who have tried to be respectful of a record primary vote, the time has come for Governor Pence to lead the ticket,” Huntsman told the Salt Lake City Tribune.

3. After Trump’s Election, Huntsman Called on the President to Keep a Strong Interest in the Asia Pacific 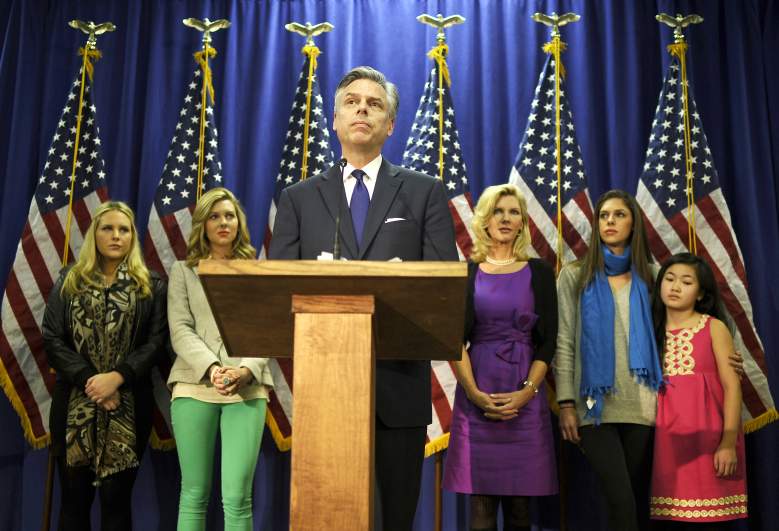 Jon Huntsman with his family when he dropped out of the 2012 Presidential Race. (Getty)

Hunstman’s past experience in foreign affairs lie in the Asia-Pacific region. It’s why Presidents George W. Bush and Bill Clinton chose him as their Ambassador to Singapore and why Obama chose Huntsman to be his Ambassador to China. In January 2017, he co-chaired a commission on U.S. economic strategy in the region with former U.S. trade representative Charlene Barshefsky and Chubb Limited CEO Evan Greenberg, publishing a report recommendations for the Trump Administration on what the U.S.’ economic strategy should be in the Asia Pacific after leading TPP.

In an op-ed for CNN, Huntsman, Barshefsky and Greenberg stressed to Trump that the Asia Pacific region will have more impact on America’s economy than anywhere else in the world.

“Over the next few decades, no region of the world will have more impact on America’s economic fortunes than the Asia Pacific,” they wrote. “As we noted in our recent Center for Strategic & International Studies (CSIS) report, ‘Reinvigorating U.S. Economic Strategy in the Asia Pacific,’ the region is home to more than half the world’s trillion-dollar economies. As billions of Asians join the middle class, the world’s economic center of gravity will move further toward the region, linking more American exports, growth and jobs to the Pacific than ever before.”

They also wrote that the U.S. should have a cooperative relationship with China, “but this cannot be sustained if it does not advance the interests of both countries. Even while expanding cooperation, Washington must be willing to challenge Beijing where it seeks to undermine the rules-based order or when its actions threaten US interests.”

4. His 2 Youngest Children Are Adopted, Including China-born Gracie Mei 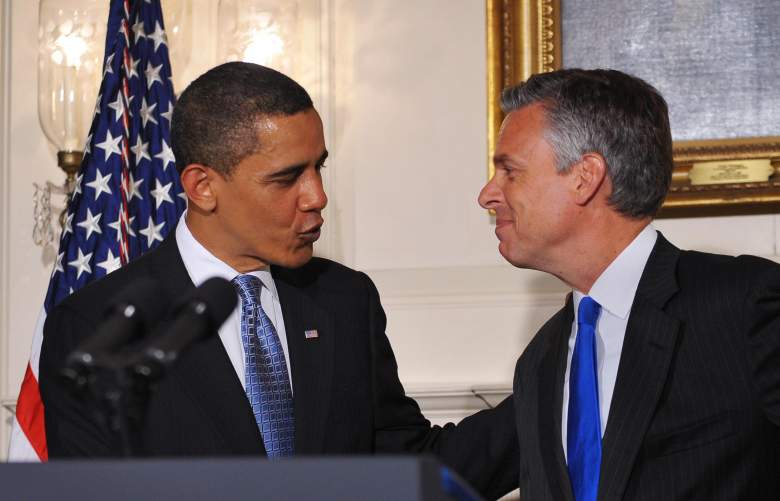 Huntsman’s two youngest children are both adopted. Gracie Mei was born in China in 1999 and Asha Bharati was born in India in 2006. His biological children with Mary Kaye Hunstman are Mary Anne, Abigail, Elizabeth and William. His son is Jon M. Huntsman III, who serves in the Navy.

Back in 2012, Huntman was disgusted by a pro-Ron Paul YouTube ad that showcased both of his adopted daughters and criticizing him as un-American. The ad was called “Jon Huntsman’s Values.”

“Yeah, I lived overseas four times … I speak Chinese, of course I do. If someone wants to poke fun of me for speaking Chinese, that’s okay,” Huntsman told a crowd at a New Hampshire event during the 2102 campaign. “The thing I object to is bringing forward pictures and videos of my adopted daughters and suggesting that there is some sinister motive there. I have a daughter from China who was abandoned at two months of age and left in a vegetable market, picked up by the police and sent to an orphanage.”

As the Salt Late City Tribune noted in 2015, Gracie Mei was also featured in a documentary called All Eyes And Ears. It features footage of Gracie Mei’s return to China when her father was named the U.S. ambassador.

5. Huntsman Has a Long Rivalry With Mitt Romney, a Distant Cousin 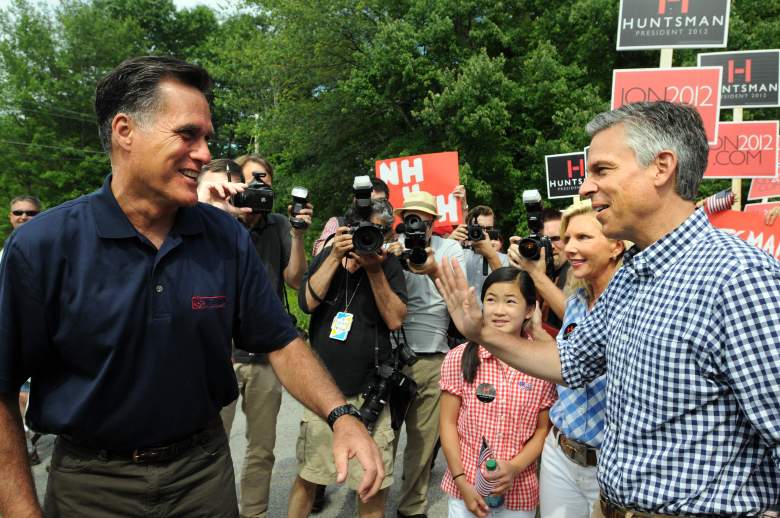 The two have a long rivalry dating back to the 2002 Winter Olympics in Salt Lake City. When a scandal arose, the Salt Lake Organizing Committee reportedly considered Huntsman or Romney to help fix the issue. But Romney was ultimately chosen and Huntsman was not happy.

“It kind of dawned on me that I was being used,” Huntsman told New York Magazine in 2011. Huntsman suggested that Romney’s selection was “precooked” and that the committee was going to choose Romney anyway.

The rivalry heated up again in 2008, when Huntsman endorsed Senator John McCain for president instead of Romney, even though Huntsman’s father was the finance chair of Romney’s campaign. Huntsman was even a consultant for Romney on foreign policy issues before the campaign. There were rumors that Huntsman promised to endorse Romney, but Huntsman told New York Magazine that this was false. “We had political conversations, but never a straight-up endorsement,” he said in 2011.