“I just shot my two kids, and I shot my wife and now I’m going to shoot myself,” an Illinois father tells police in a chilling 911 call.

Randall Coffland had indeed murdered his twin teenage daughters in front of their mother before he placed the 911 call released by St. Charles police, according to Patch.

You can listen to that 911 call above and one from his wife, Anjum, below. Be aware that both calls are extremely disturbing. The mother was the lone member of the family to survive the attack; police say Randall, a network manager from Illinois, shot and killed his daughters, Brittany and Tiffany, before shooting his estranged wife in the legs and then killing himself.

Anjum’s 911 call is particularly difficult to listen to as it is peppered with the mother’s anguished screams as she informs dispatchers her husband has killed her daughters. There is also a call from a woman who arrives to help and finds Anjum sitting in a pool of blood.

“I want you to live and suffer like I did,” Randall Coffland shouts at Anjum on the chilling 911 tape. Anjum calls police, says her husband killed her daughters, and screams. Another woman then calls 911 to report that Anjum was sitting in a pool of blood saying, “My girls are dead.”

At St Charles river fest. Awesome day had so much fun. pic.twitter.com/vWU4GfKMXZ

According to CBS News, police received a 911 call from someone inside the luxury condominium around 5 p.m. March 10. It was Randall Coffland, informing them of the shootings.

After saying he had killed his daughters and shot his wife, Coffland gave police his address and then said, “I’m going to kill myself now too. My two girls are dead, and I’m killing myself,” he says.

“Come here now! Oh my God, my husband shot my kids!” Anjum said in the call, screaming, “My daughters are dead!”

Police said they found one teenager dead on the sofa and the other in a bedroom, according to Patch.

Learn more about the family and the murders here: 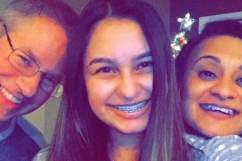