Elwin Joyce was arrested on Tuesday, May 9th, in connection to an alleged breaking-in and robbery at an estate owned by rapper 50 Cent.

According to police, Joyce was spotted on the estate while they were responding to a tripped alarm, and are currently in the process of determining the severity of the crime. As the details of the break-in and robbery come to light, here are five fast facts about Joyce, his life, and the criminal charges he is currently facing.

1. He Lives In Windsor, Connecticut

Joyce, 34, is a resident of Windsor Connecticut. This places him in reasonably close proximity of 50 Cent’s mansion, which is located in Farmington, Connecticut. According to police, the mansion was unoccupied at the time of the alleged break-in, as 50 has not lived there for some time and has spent the few years trying to sell it.

Despite the proximity of the mansion to his own home, however, police have found no connection between Joyce and 50 Cent, born Curtis Jackson. It appears to be a random act.

2. He Tripped The Estate’s Security

TMZ reports that Joyce was thwarted by 50 Cent’s top notch security system. Joyce “tried to make his way into the home through the generator room, but set off an alarm that alerted property manager, David Holloway.” Police report that Holloway looked out and saw Joyce moving across the estate’s grounds, and that he immediately called 911.

TMZ also reports that Joyce’s actions were premeditated, as he was seen wearing dark clothes and a dark knit cap. When he was arrested by the police, they found a printout of directions from a nearby hotel with 50 Cent’s address.

3. He Was Reportedly Found Alone

According to Patch, police responded to the property at 50 Poplar Hill Drive around 12:20 p.m. Eastern, after an entry alarm went off and tipped them to the break-in. Upon arriving at the scene, they spotted Joyce, seemingly alone and with were later deemed to be “burglary tools.”

Police located a lone suspect on the premises and determined that he forced his way in to the residence there. A search of the premises with Farmington officers and a canine, according to officer Lt. Buckley, revealed no one else at the location, and nothing appeared to be stolen at that time. Joyce was taken into custody on the spot.

4. He Was Charged With Criminal Mischief

Despite the fact that 50 Cent no longer occupies it, the estate that Joyce was found on has an overwhelmingly high value. The rapper originally bought the estate from boxer Mike Tyson in 2004, and includes 21 bedrooms, 35 bathrooms, an indoor swimming pool, a recording studio, a basketball court, and an officially approved helicopter strip for landing. Watch a video clip of 50 touring the estate on an episode of Oprah’s Next Chapter below.

When 50 declared bankruptcy in 2015, a judge approved a plan for him to reorganize his finances and pay back credits– which included selling off this estate. It 2007, it was listed for $18.5 million, but more recently, it’s biding price is closer to $6 million. Consequently, Joyce was slapped with charges of criminal mischief and possession of burglary tools.

Joyce was additionally charged with second-degree burglary and second-degree criminal trespass. While it remains to be seen whether the burglary charges will stick given the fact that nothing appears to be stolen, Joyce’s presence at the scene of the crime and confirmed break-in on the property has been confirmed by the police.

Joyce is also being hit with a criminal attempt at sixth-degree larceny, and is currently being held on a $100,000 bond. It is unclear whether he has a lawyer at this time. 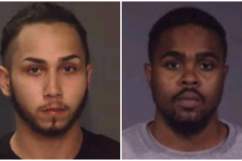 Loading more stories
wpDiscuz
0
0
Would love your thoughts, please comment.x
()
x
| Reply
Elwin Joyce has been arrested in connection to a robbery at the home of rapper 50 Cent. Learn about his life and the charges he is currently facing here.