The parents of Kingston Frazier, 6, found out about his death after driving up to a press conference being held by the Hinds County Sheriff’s Department of Jackson, Mississippi. Dwan Dion Do Wakefield, Byron McBride, and DeAllen Washington have been arrested in connection with the murder, reports WAPT News. The New York Times reports that Wakefield and Washington are expected to face capital murder charges.

Mississippi has the death pentalty and has recently taken measures to bring back the firing squad, electric chair, and gas chamber, reports Fox News.

Frazier was killed by a single gunshot wound to the head and was found inside a stolen car in Gluckstadt, Mississippi. He had been the subject of an Amber Alert since early Thursday morning after being abducted around 1:15 a.m., reports Fox News.

According to the Clarion-Ledger, Frazier was left in the car by his mother, Ebony Archie, when he was abducted. Archie had run into Kroger for a few minutes for groceries. During this time, authorities say the suspects pulled up to Archie’s Honda and stole it while Frazier was inside.

? Rest In Peace, Kingston ?
Praying for all who knew and loved you. We all feel your loss today and pray justice is served.#kingstonfrazier pic.twitter.com/uTPHEHJkaj

Prior to the arrests, police held a press conference about the boy’s murder without alerting the parents about his death. The video of the incident can be watched above. About 2:30 into the footage, a black car pulls up on the presser and Frazier’s parents get out.

“Where’s my son?” his father asks. “I ain’t heard sh*t about my son all day. And I know he ain’t right.” He then walks off after approached by an officer, saying, “My son is dead, man.”

The WAPT reporter then continues filming and reporting.

Mississippi Governor Phil Byrant has commented on the murder, writing on his Facebook:

There are no words to express the anger and sadness over the loss of Kingston Frazier. The innocence and life of a six-year-old child have been taken by a horrific crime. It is time this senseless violence end. We can all pray that God will assuage the pain of Kingston’s family and friends, while we hold the guilty accountable. 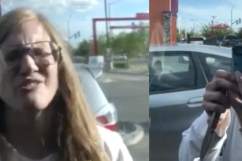 Loading more stories
wpDiscuz
6
0
Would love your thoughts, please comment.x
()
x
| Reply
The parents of Kingston Frazier, 6, found out about his death after driving up to a press conference.