Leon Balfour turned himself in after slamming a 69-year old woman into the concrete ground and throwing her into a pool. (Twitter)

A 16-year-old boy has turned himself into Broward County authorities after a video showing him throwing an elderly woman to the ground and the tossing her into a nearby pool went viral.

Leon Balfour Jr. of Margate surrendered to police May 8 and has reportedly been charged with battery on a person 65 years or older, 7News WSVN reported.

The Miami Herald reported that Balfour was accompanied by his mother and his lawyer while he turned himself in.

He was processed at the Broward County Juvenile Assessment Center before being transported to the Broward Regional Juvenile Facility.

In the video, Balfour picks up 69-year-old Nancy James, who was walking her dogs, and slams her to the concrete ground before throwing her into a pool.

1. Balfour Was at a Pool Party With Hundreds of People When He Assaulted James

In the above video, Balfour is the one in the red shirt that unexpectedly walks up to James, who was telling the group of about 200 people at Players Place Apartment Complex in North Lauderdale, Florida, to turn down their music.

Balfour lifts James up into the air and appears to slip on the wet ground, falling and slamming her into the ground outside of the pool. James still has at least one leash from her dogs attached to her wrist as a scream saying “throw her in” to the pool is heard from someone else at the party.

Balfour forcibly picks her up off of the ground almost immediately and throws her into the pool while falling in with her.

The rest of the party clears out of the pool area and can be heard screaming and laughing at what had just occurred.

The Herald reported that James suffered minor injuries — bruises to her shoulder and thigh — from the fall and was released from a hospital the morning of May 8.

James’ two dogs were unharmed in the incident, but ran away after she was thrown into the pool. A neighbor at the complex chased them down and returned them to James.

2. James Said She Thinks Balfour Will Learn His Lesson

James initially opted to not speak with the media after the incident, but ended up doing so to Local 10 News and a couple of other outlets. She said that she was shocked as to what happened, especially with Balfour being so young.

“No one should ever, ever, ever, ever, have to go through that, you know?” James said to Local 10 News. “It just shouldn’t happen. The kid has not evolved yet into what you’re supposed to be as a human being.”

James, who is on the apartment complex’s association board, said that she asked the party to turn down the music because she heard several complaints from other neighbors about the noise level.

“Kids are kids, no matter what,” she said. “They’re going to have parties, just lower the music.”

She said she feels a little sore from the injuries she suffered, but is happy knowing that Balfour will likely learn his lesson.

“Black and blue, but you know what, he’s not gonna ever do this to anyone else,” she said to 7News.

3. His Father Is In Prison For Committing Murder

Leon Balfour-Joseph (Dark Side of America)

Reports say that Balfour is the son of convicted murderer Leon Sean Balfour-Joseph.

The elder Balfour is serving a sentence for stabbing a man — 31-year-old Darrol Henry — to death during a fight. He was charged with first-degree murder after he was arrested and was later convicted.

The fight between the two men occurred in the afternoon on August 31, 2008 in Coral Springs. He isn’t set to be released from prison until November 21, 2027.

In 2012, Balfour filed an appeal to the State of Florida, saying that he killed Henry because of of self-defense. He had argued that Henry attacked him with the knife first, but several witnesses said they saw Balfour grab a knife from inside of his house and chase Henry around a parking lot.

Read the full appeal in the document below:

The state denied the appeal saying that witness accounts tell a different story than Balfours.

Witnesses and neighbors at the complex were in disbelief at what happened at the place they call home.

One resident, Stacey Gaudrau, told 7News that she could have been the one to get assaulted instead of James.

The cry for justice was so strong online that a few internet communities took the viral video frame-by-frame in an attempt to track down the suspect. Soon enough, a few sleuths connected the dots to Balfour’s social media accounts and made them public. He then made all accounts private before turning himself in to authorities. 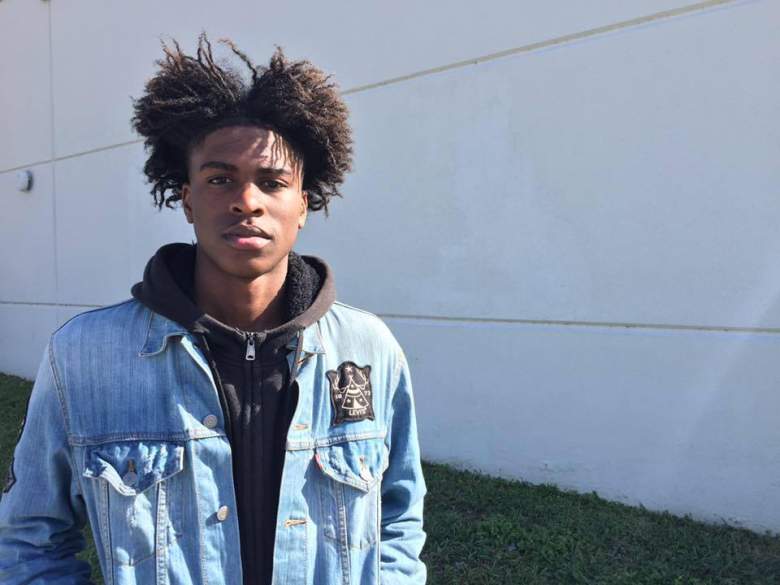 Leon Balfour turned himself in after slamming a 69-year old woman into the concrete ground and throwing her into a pool. (Facebook)

According to his social media accounts, Balfour attends Coral Springs High School. The school is about a 10-minute drive from where the incident took place at the complex.

In May 2013, the school had an enrollment of 2,385 students. It’s located in Broward County and is largely known for its football team.

It’s the same school that was featured in Morgan Spurlock‘s 2011 documentary film titled The Greatest Movie Ever Sold. Spurlock went to the campus and contracted illustrator Michelle Morse to paint a mural that was a public work for Coral Springs while also promoting the film’s context.

The mural didn’t last too long, however, as it was defaced in 2013 and much of the original artwork was erased.

Loading more stories
wpDiscuz
23
0
Would love your thoughts, please comment.x
()
x
| Reply
Leon Balfour Jr. has been identified as the man in a viral video who picked up an elderly woman and slammed her to the ground before throwing her into a pool.